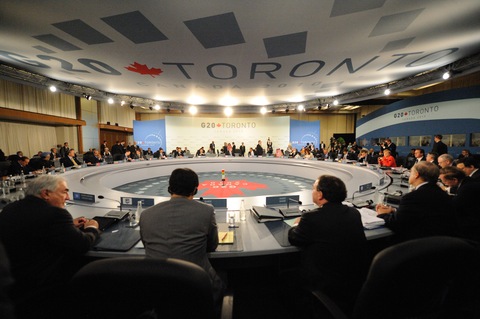 Head of states attend the first plenary session of the G20 summit on June 27, 2010 at the convention center in Toronto, Ontario. Photo by Eric Feferberg/AFP/Getty Images

The Canadian Broadcasting Corporation reported Wednesday that the U.S. National Security Agency conducted “widespread surveillance” during the 2010 G-8 and G-20 summits in Toronto. CBC obtained documents from NSA leaker Edward Snowden, which indicated that the surveillance was “closely coordinated with the Canadian partner.”

NSA’s Canadian counterpart, the Communications Security Establishment Canada, CSEC, are both members of the “Five Eyes” intelligence network, which also includes organizations from Australia, New Zealand and the United Kingdom. CBC reported that the surveillance at the world leaders’ conference was, in part, to promote U.S. interests. The report stated, “Notably, the secret NSA briefing document describes part of the U.S. eavesdropping agency’s mandate at the Toronto summit as ‘providing support to policymakers.'”

Canadian and U.S. authorities have declined to comment on the report, which is yet another damaging revelation for the United States. Other recent reports of global surveillance have manifested in an international backlash against the U.S. for its extensive surveillance program.

Reuters reports that Glenn Greenwald, the former Guardian journalist who has worked closely with Snowden, shared a byline on the CBC report.