On November 17, 2012, 88-year-old Peter Bielskis, a World War II veteran, was getting ready to do something he’d never had to do in battle: jump out of a plane.

“I always seen these people that jump out of airplanes and I thought they were nuts, because they’d leave a perfectly good airplane just to get outside it,” Bielskis told PBS NewsHour. “I guess I’m one of the nuts now.”

He was nervous, even though by age 19 he had flown in 27 combat missions as a member of the Eighth Air Force, 384th Bomb Group. But when the time came, he found that the U.S. Army Golden Knights parachute team gave him the confidence to jump.

“The fella said, ‘I’ll count to three and then you’ll jump.’ I never heard the three,” Bielskis said. “It was fantastic. I never realized, it’s so quiet, going down there nice and easy. And the best part about it when I got down there were the Dallas Cowboys cheerleaders waiting for me to come down.”

Bielskis wasn’t the only veteran tandem skydiving that day. He was joined by veterans of the Korean War, the Vietnam War, Desert Storm and the wars in Iraq and Afghanistan, as well as a 9/11 first responder. 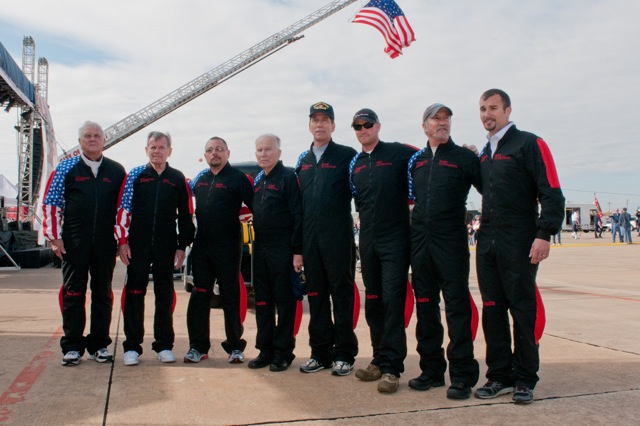 The event was organized by Ryan “Birdman” Parrott, a 32-year-old Navy veteran of the Iraq War, who released “Sons of the Flag”, a book compiling the stories of all the veterans he’s jumped with, earlier this month.

The jumps, as well as the book were meant to publicize a non-profit of the same name that Parrott started to raise awareness for veterans who suffered burns from combat.

Like some of the vets he’s jumped with, Parrott is a burn survivor.

While serving in Iraq in 2005, Parrott was riding atop a Humvee when an improvised explosive device (IED) was launched and exploded into his vehicle, throwing him into the air, earning him the nickname, “Birdman”.

He awoke burning; his face and arms on fire, which left first and second-degree burns. Three other soldiers in his unit also suffered burns that caused lifelong injuries.

In the United States, about 450,000 people suffer burns each year, but there are only 123 burn care facilities inside the nearly 6,000 hospitals throughout the country, according to the American College of Surgeons Health Policy Research Institute.

The Sons of the Flag organization helps families of burn victims from the military and elsewhere by supporting them through their loved ones initial hospitalization and arranging hotel stays, parking passes and toiletry bags. It even set up a burn surgeon fellowship program.

On Monday, Parrott will serve as the grand marshal for the 91st Memorial Day parade in Dearborn, Michigan, his home state. PBS NewsHour caught up with him to talk about his experiences.

Check out what Sons of the Flag burn foundation are doing to support our veterans. http://t.co/hSvdbOKwOO. Go Ryan! pic.twitter.com/NCEd83ucH1

NewsHour: Why did you decide to go skydiving with these veterans?
Ryan “Birdman” Parrot: To me, it’s taking it back to World War II, when the paratroopers first invaded, when the airborne team jumped in. Every time I see the picture, it’s very iconic. It’s just a bunch of soldiers that are ready to go, and each one of them is standing behind the other. It kind of signifies that the soldiers have each other’s backs.

NH: How did you find veterans willing to jump out of a plane?
RP: The first initial deal was going to be a bunch of veterans jumping out of the plane. Then when I had the idea to go back to the beginning, we needed to recruit a soldier from every war. I didn’t know if it could be done.

At first, I started off with the younger guys I knew would jump from a plane. I started recruiting Afghanistan and Iraq soldiers who served in these conflicts. And then I started dating it back. I knew a Green Beret from Vietnam, Tony Bandiera. I called him and he said “I’m in.” These are men who still to this day uphold the traditions of the U.S. military.

World War II, Korea and Desert Storm were very difficult. I didn’t know anybody from Desert Storm, so I called all my buddies in the military. We found everybody minus World War II.

NH: How did you finally get a World War II veteran?
RP: I had about five different veterans from World War II that I called and I wasn’t making any headway. I went online and Googled a bunch of World War II veterans’ names within the Texas area, and we started cold calling them via the White Pages. I went through about 30 to 35 soldiers; every one of them told me no. But hearing their stories was the most inspiring part of this thing and it kept me going. 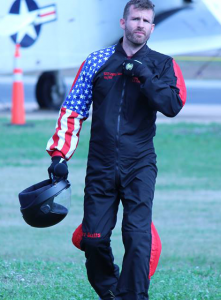 I called a good friend of mine, Gary Tanner, out of the American Legion in Michigan and he said “give me an hour.” Sure enough, Tanner came through and he found me a gentleman by the name of Peter Bielskis, who served as a B17 gunner in World War II, and he did 27 combat missions successfully and never jumped out of a plane in his life.

NH: In doing work for your foundation, what have you learned about burn treatment in the U.S.?
RP: Out of the initial patients and the families that we’ve met, they always ask the same question: Where do we go? There is not a national pipeline for burns. People don’t know how to navigate that terrain.

The injury is a lifelong injury. So that’s why we call ourselves the Sons of the Flag, the resource for burn survivors, so we can be that advocate, that resource, to help them navigate that terrain, get them to the appropriate place and have their back while they are going through this.

NH: In the book you share the stories of other veterans, mainly why they served. What made you serve?
RP: I saw the Twin Towers attack on 9/11 and I was sitting there in school feeling like I wasn’t doing enough. People were born to defend this country and I felt like I was one of those.

NH: On Monday, you will return to your home state to be the Grand Marshal of the Dearborn, Michigan, Memorial Day parade. How do you feel?
RP: It’s an absolute honor. I never would have thought that I’d be a guy who would be asked. It’s overwhelming — there’s many other soldiers who deserve this more than I do. It’s humbling for sure.

NH: What does the Memorial Day parade signify for you?
RP: It signifies to me that we need to remember why we are blessed to live in this country. It’s because of the men and the women who have sacrificed and paved the way for us.

It is not a celebration for me personally, but it is more of a humbling memorial to recognize where we come from and why we are who we are.

Left: World War II veteran Peter Bielskis on his first skydive in 2012 as part of the Legacy Skydive event to raise awareness for Sons of the Flag burn survivors foundation. Credit: Jerry McClure.