Steve Wynn, the hotel magnate and current finance chair of the Republican National Committee, has been accused by multiple former employees of sexual assault or misconduct, the Wall Street Journal reported today.

The Journal reached out to 150 people who have worked with Wynn, the owner of Wynn Resorts. Dozens reported sexual misconduct by Wynn, some of them claiming assault, the Journal said. In one account, a manicurist said Wynn pressured her to remove her clothing and have sex with him after an appointment in 2005. She filed a report to the company’s human resources department, which ultimately went nowhere, and shortly after left the company. Wynn eventually settled a case with the employee for $7.5 million, the Journal reported.

This settlement was raised in a court filing by Wynn’s ex-wife, Elaine Wynn, who is seeking to renegotiate the terms of her divorce, specifically, challenging a shareholder agreement. Elaine Wynn did not immediately respond to the PBS NewsHour’s request for comment.

Wynn resigned his position as finance chairman of the Republican National Committee on Saturday following reports of the allegations.

The accusations are the latest in wave of sexual misconduct and assault claims against powerful men.

The accusations are the latest in wave of sexual misconduct and assault claims against powerful men, sparked by the Harvey Weinstein scandal and the #metoo movement that has followed. They also come two days after former USA Gymnastics coach Larry Nassar was sentenced to up to 175 years in prison for what the judge described as years of predatory sexual abuse of young athletes under his care.

Despite dozens of accusations against powerful men in recent months, the Journal reports that this is the first to be made against the CEO of a publicly held company.

The Journal reported a broad range of additional accusations of sexual misconduct or abuse against Wynn involving his former employees. According to the Journal, a former secretary for Elaine Wynn, said that Wynn would use vulgarities and refer to her sexually, and one former employee said that “Wynn grabbed her waist as she stood against a wall and told her to kiss him.” The Journal said none of the victims approached the newspaper, and many of them feared that speaking publicly would hurt their career.

Wynn denied all of the allegations, saying, “the idea that I ever assaulted any woman is preposterous.”

In a statement distributed to the NewsHour and other media outlets, Wynn denied all of the allegations, saying, “the idea that I ever assaulted any woman is preposterous.” In the same statement, Wynn Resorts said it maintains an independent hotline for employees to report anonymous claims of harassment and, “since the inception of the company, not one complaint was made to that hotline regarding Mr. Wynn.” The company was founded in 2002, according to the initial IPO. A Wynn Resorts spokesperson has not yet confirmed when the hotline was created.

Wynn also said in his statement that “the instigation of these accusations is the continued work of” Elaine Wynn, who he said has “threatened to slander” him.

In a separate interview, before the Wall Street Journal reported these accusations, Elaine Wynn told the PBS NewsHour at the Women’s March in Las Vegas that women should be more motivated than ever to speak up about their passions and politics, especially in 2018.

She said that part of the reason she wanted to serve as honorary chair of this year’s Women’s March was to tell women that they “do have courage to come forward no matter what the issue is, whether it’s DACA or sexual harassment or assault or whether it’s equal pay. The more voices we hear, the more secure we feel that we won’t be outliers — that we are going to have support. It’s a long time coming. It is ‘Time’s up,’” she said, referring to the campaign against sexual assault at the Oscars.

Since publication of the allegations, shares in Wynn Resorts have dropped precipitously. Wynn also recently appeared on a FOX News special called “The Wise Guys.” In a statement to the NewsHour, a network spokesperson said “we will not be booking Steve Wynn on any potential future installments of The Wise Guys, if it moves forward beyond a one-off special.”

In October, the Journal and NBC reported that Wynn had asked Trump on behalf of the Chinese government to deport Guo Wengui, a Chinese businessman who for years had sought asylum in the U.S.

Read the full statements from Steve Wynn and Wynn Resorts below. 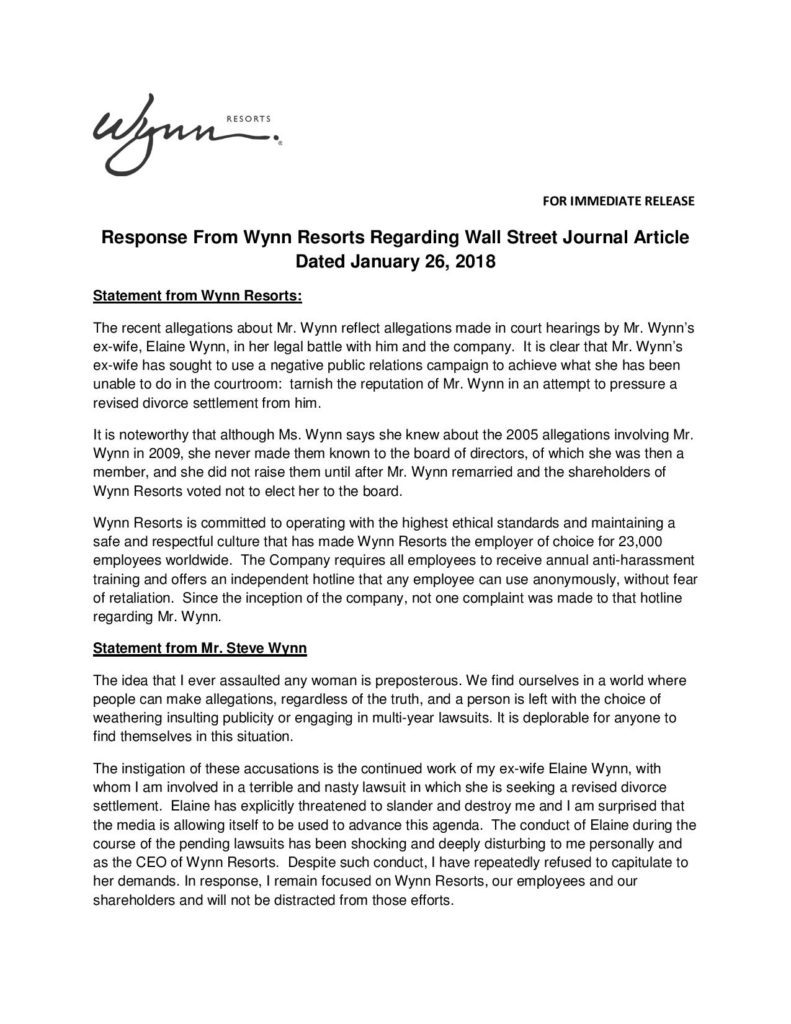 This article has been updated to clarify Wynn’s role on Fox.

Left: Steve Wynn, chairman and CEO of Wynn Resorts, speaks May 3 during the Milken Institute Global Conference in Beverly Hills, California. The Wall Street Journal is reporting dozens of sexual misconduct allegations against the hotel magnate. Photo by Mike Blake/Reuters

How was Larry Nassar allowed to abuse athletes for so long?