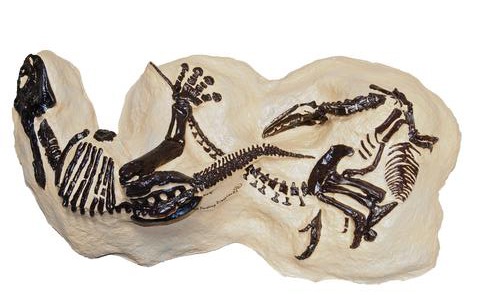 Update | Tuesday, 2:38 p.m. EST: During a Bonham’s auction of fossils, the fossil known as the “dueling dinosaurs” was not sold. The Associated Press reports bidders failed to meet the reserve for the skeleton duo on Tuesday. The highest offer was $5.5 million.

A carnivore, Nanotyrannus lancensis, and a large herbivore, Chasmosaurine ceratopsian of an undescribed species, get into a mortal combat and die forever locked together. The rare fossil is one of only two known occurrences where predator and prey have been preserved together. Up for auction at Bonhams, the fossils had been priced to sell for as much as $9 million, but bidders failed to meet the reserve Tuesday afternoon. The fossil remains unsold.
The near-complete dinosaur skeletons were found by commercial prospectors on private land owned by Mary Ann and Lige Murray, in the Hell Creek Formation of Montana in 2006.

The dinos were originally dangled in front of potential buyers on a website in 2011 dedicated to the skeletons it called “Dueling Dinosaurs.” (The website has been taken down since.) According to a National Geographic’s Phenomena blog post, the website claimed the two dinosaurs had killed each other, without any evidence (publications or technical details) to back up the boasts.

“The Bonham’s sale is open to anyone with deep enough pockets. Those involved in selling the “Dueling Dinosaurs,” including Larson, claim that they want to see the dinosaurs in a museum, but this rings hollow when there’s a good chance that the auction could rob scientists and the public alike of a chance to even see these spectacular animals.”
— Brian Switek, National Geographic’s Phenomena blog.

There are many other historic fossils priced for auction Tuesday. Some from the collections of The San Diego Natural History Museum were included in the sale, but the museum called off the fossil auction Monday, the San Diego Union-Tribune reports. The fossils, including 13-foot skeleton of a fish, a 51-inch piece of a hadrasaur’s tail and a skull of predatory marine fish, were taken off the auction block after criticism from scientists and others because, if sold, the artifacts would have no longer been available for research.

Reuters reports to date, the most expensive dinosaur fossil sold at auction is a Tyrannosaurus Rex skeleton named Sue for $8.3 million in 1997.