How well do you know your earthquake facts vs. fantasy? 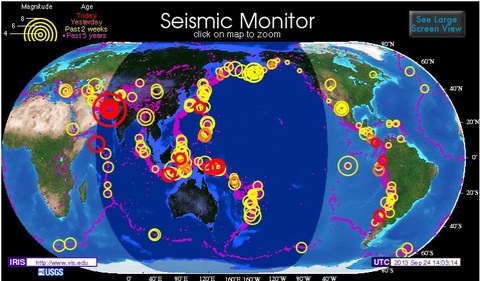 Image by Incorporated Research Institutions for Seismology. Explore a larger, interactive version of the map here.

Fact or fiction: We can predict earthquakes.

Fact or fiction: We can stop earthquakes.

Fact or fiction: During an earthquake you should head for the doorway.


Do you know your facts from fiction? Check your answers.

The U.S. Geological Survey is the only federal agency which records and reports earthquake activity in the United States, and in this great explainer, the USGS dispels the myths about earthquakes.

The USGS reports that earthquakes pose a significant risk to 75 million Americans in 39 states.

According to Incorporated Research Institutions for Seismology, there have been 579 earthquakes of a magnitude greater than 4.0 on the Richter scale in the past 30 days. After the 7.7 magnitude earthquake in Pakistan, the second strongest occurred Aug. 30 off the coast of Alaska near the Andreanof Islands, Aleutian Islands, with a magnitude of 7.0.