Muhammad Ali, the three-time world heavyweight champion who became a global and cultural icon, died on Friday in Phoenix. He was 74.

In boxing, Ali was known for his speed and punishing punches — skills that gave way to his signature catchphrase, “float like a butterfly, sting like a bee” — as well as his audacious self-promotion.

Outside the ring, Ali’s affiliation with the Nation of Islam was highly polarizing (he later converted to Sunni Islam and Sufism). His resistance to the American war effort in Vietnam made him perhaps the most well-known conscientious objector in U.S. history.

His start in boxing came at an early age, after his bike was stolen. Young Clay vowed to “whoop” the offender, but a local police officer named Joe Martin urged caution, telling him to learn to fight first.

He trained with Martin for six months and won his first match in a three-round decision. Clay went on to pile up the awards as a young boxer and was picked to fight for Team USA in the 1960 Rome Olympics. He knocked off a Polish fighter named Zbigniew Pietrzykowski to win the light-heavyweight gold.

When he returned to America, Clay received a hero’s welcome in parts of the country. But when he went back to his still-segregated hometown of Louisville, he was denied service at a whites-only restaurant. In a fit of rage, Clay threw his Olympic medal into the Ohio River.

The perfect record earned Clay a chance to fight for the heavyweight title in 1964, at just 22 years old. His opponent was “The Big Bear,” Sonny Liston. At the time, Liston had a record of 35-1 and was the odds-on favorite against Clay. Unfazed by his underdog status, Clay pounded Liston into submission in just six rounds.

“I whooped him so bad he had to go to the hospital,” Clay said afterwards. “And I’m still pretty. Whatcha gonna say about that? Huh?”

The fight had colossal ramifications in the boxing world. Rock Newman — a former boxing promoter who went to host a public television show in Washington — was in sixth grade when Clay beat Liston. He said the upset taught him to not care about what others think.

Newman said Clay could get away with technical shortcomings due to his “blinding speed and superior reflexes.”

He “fought with his hands low and sometimes, whilst he was fighting, he was talking, so his chin wasn’t down … but because of his superior athletic skills and how physically gifted he was, he could do these things. … He knew how to be in range to hit you without getting hit. And at its purest form that is what boxing is about, hitting and not getting hit. Ali was a master at it.”

Amid all of Clay’s success in the early 1960s, he was undergoing momentous personal changes outside the ring.

While training for the Liston fight, he had met Malcolm X — the black nationalist leader who at the time served as spokesman for the Nation of Islam. After beating Liston, Clay joined the Nation and changed his name to Cassius X. Later, Elijah Muhammad, the leader of the Nation of Islam, named him Muhammad Ali, meaning “praiseworthy one.” Ali said the change allowed him to shed his “slave name.”

In 1965, Ali fought Liston again, in Lewiston, Maine. This time, the fight lasted less than two minutes before a knockout. Ali stood over Liston, taunting the defeated fighter as he lay on the mat. The moment gave way to one of the most iconic sports images of all time.

But just as Ali had entered his prime, a different fight had begun in the jungles of Vietnam. He was drafted by the Army in 1967, but claimed conscientious objector status, citing his faith.

“Why should me and other so-called Negroes go 10,000 miles away from here in America to drop bombs and bullets on other innocent brown people who’ve never bothered us?” he said. ”I will say directly, no, I will not go.”

The Justice Department said Ali’s objection was political, not religious, and rejected his claim. Facing a prison term, Ali was stripped of his title and didn’t fight again for three and a half years. (The controversy was famously immortalized on the cover of Esquire magazine, with Ali posing as martyr St. Sebastian.)

“I don’t worry about jail,” he said during a 1968 interview broadcast on public TV station WNET. “I believe in Allah. I believe in Elijah Muhammad as the Messenger of God and many great men have to go to jail and so I don’t pay no attention to it. If the time comes, I’ll just have to go.”

By 1970, with anti-war protests raging nationwide, boxing authorities allowed Ali to return to the ring.

That set up a match with the man who had claimed the heavyweight title during Ali’s absence: Joe Frazier. The bout at Madison Square Garden in March 1971 was dubbed “The Fight of the Century.” But the long layoff had robbed Ali of his speed. He lost to Frazier after 15 grueling rounds.

Within months of the loss, though, Ali scored a major legal victory. The U.S. Supreme Court upheld his conscientious objector claim and wiped away his prison sentence.

In 1974, Ali faced off against younger, hard-hitting contender George Foreman in Kinshasa, Zaire. The fight was named the “Rumble in the Jungle” and it happened before dawn in the African heat. The prize was $5 million and Ali was a heavy underdog — but still had the support of the crowd.

Ali stayed on the ropes early in the fight, allowing Foreman to land a flurry of punches. It was a strategy he’d later call “rope-a-dope,” which he used to wear out his opponent. Late in the eighth round, Ali landed a combination, ending with a right hand that knocked out Foreman.

Less than a year later, Ali was back in the ring against Frazier, for a rematch in the Philippines called the “Thrilla in Manila.” Ali won on a technical knockout in 14 rounds, but took a beating. 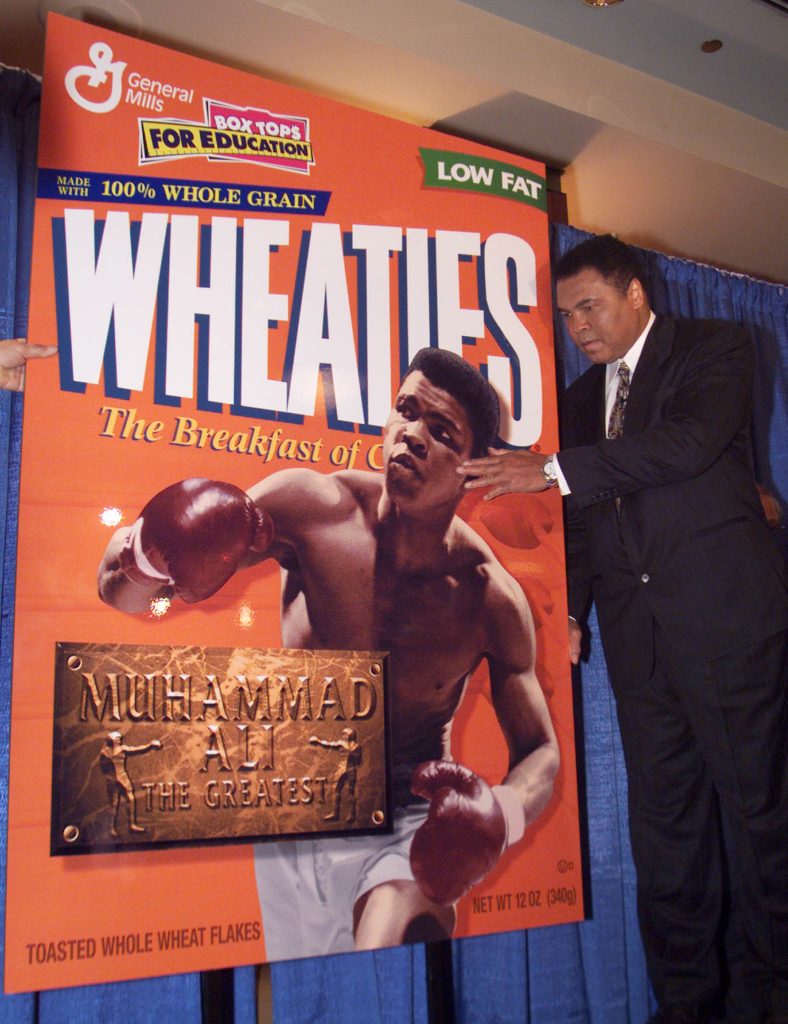 Three years into retirement, Ali revealed he’d been diagnosed with Parkinson’s. His voice softened and his hands began to shake. He survived numerous hospital stays before his death Friday. Despite the disease, he remained active in old age, acting as an advocate for Parkinson’s awareness and research.

In 1990, Ali helped win the release of 14 U.S. hostages from Saddam Hussein. Six years later, Ali stepped into the sports world spotlight once more, lighting the Olympic flame at the Summer Games in Atlanta. In 2005, President George W. Bush awarded him the Medal of Freedom. 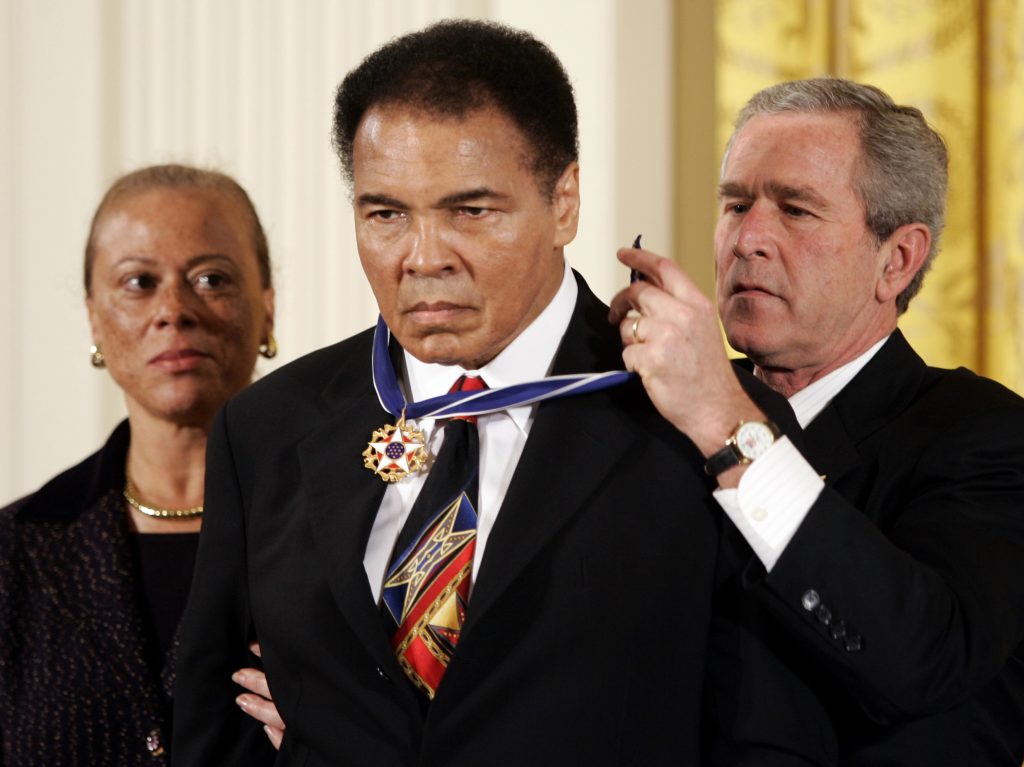 Ali was married four times and is survived by his wife Yolanda “Lonnie” Ali and his nine children. His youngest daughter, Laila Ali, also became a professional boxer. (She retired in 2007, undefeated.)

Even as he grew older, Ali remained a larger-than-life figure, the subject of movies, documentaries, Gatorade commercials and posters. He was named Sports Illustrated’s “Sportsman of the Century” and graced the magazine’s cover 37 times — second only to Michael Jordan. Each time he appeared in public — at the University of Louisville for sporting events, for example — it was a spectacle. 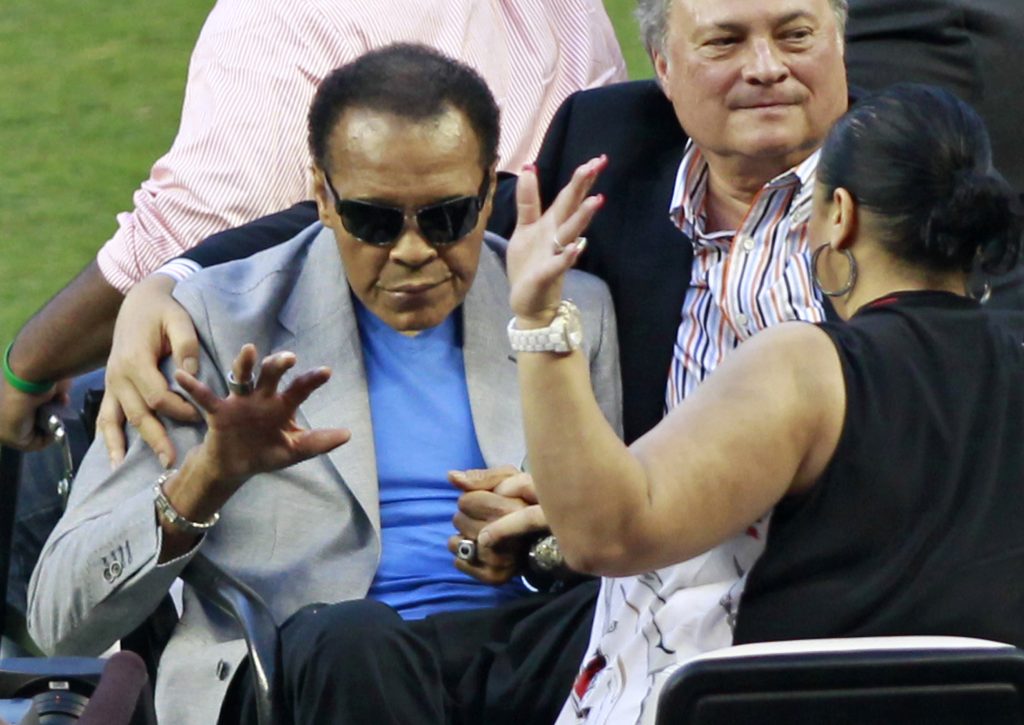 Boxing champion Muhammad Ali (left) rides in a golf cart next to Miami Marlins owner Jeffrey Loria during pregame ceremonies at a Marlins-St. Louis Cardinals game in Miami on April 4, 2012. Ali was diagnosed with Parkinson’s syndrome in 1984. Photo by Andrew Innerarity/Reuters

“Ali was not a politician, he had no ambition in that way,” said poet and author Nikki Giovanni, who knew Ali well. “He was an athlete who said, ‘No, it doesn’t matter what you all think about me or what you say. It doesn’t matter, your praise. I need to stand for something.’ And he’s done that.”