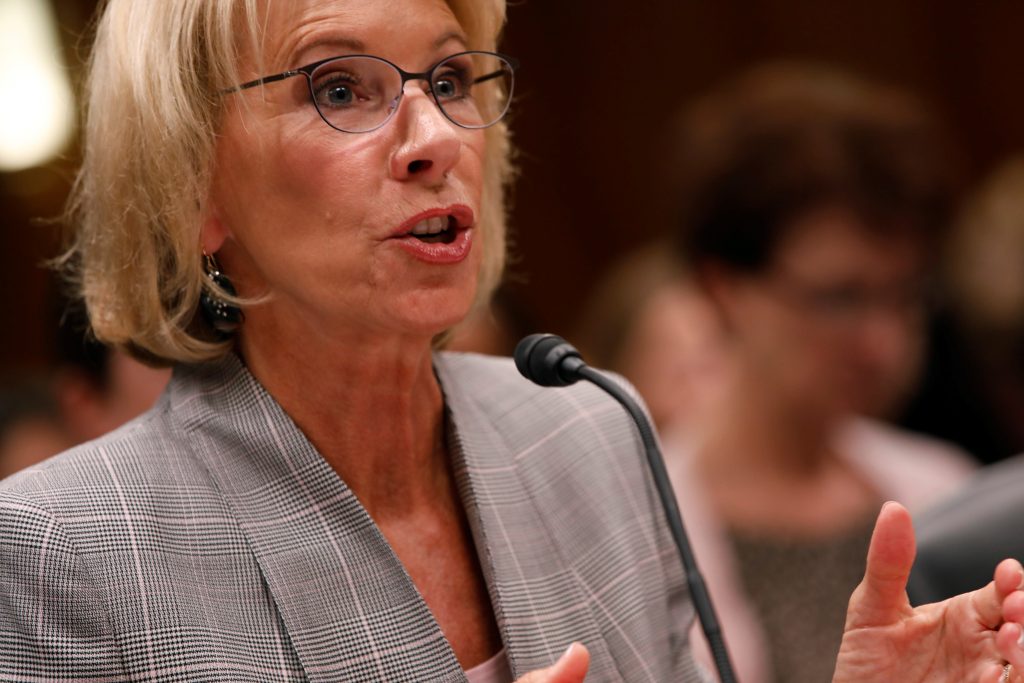 DeVos spoke after a daylong series of meetings with victims of sexual assault, those who say they were falsely accused and representatives of colleges and universities.

She says all are interested in ensuring that the process is fair and all acknowledged that it isn’t. She says, “This is an issue we’re not getting right.”

The meeting was held against the backdrop of remarks made by the Education Department’s top civil rights official, who said the vast majority of sexual assault claims resulted from both parties having been drunk.

Candice Jackson, acting assistant secretary for civil rights, was quoted in The New York Times on Wednesday as saying federal rules have resulted in many false accusations under the law known as Title IX.

In most investigations, she said, there’s “not even an accusation that these accused students overrode the will of a young woman.”

“Rather, the accusations — 90 percent of them — fall into the category of, ‘We were both drunk, we broke up, and six months later I found myself under a Title IX investigation because she just decided that our last sleeping together was not quite right,'” Jackson is quoted as saying in an interview.

In her statement of apology, Jackson said she was a rape survivor. “I would never seek to diminish anyone’s experience,” she said. “My words in The New York Times poorly characterized the conversations I’ve had with countless groups of advocates. What I said was flippant, and I am sorry.”

Survivors of sexual violence, people who say they were falsely accused and disciplined and representatives of colleges and universities were among those invited to meet with DeVos on Thursday to talk about enforcement of Title IX as it relates to sexual assault.

Sen. Patty Murray, the senior Democrat on the Senate committee overseeing the Education Department, said in a letter sent Wednesday night to DeVos that Jackson’s remark “suggests a fundamental misunderstanding of campus sexual assault and suggests that (Jackson’s office) is not prepared to take accounts from survivors seriously.”

Advocates for assault survivors who have spent years trying to get schools to take victims and a “rape culture” seriously worry that DeVos’ series of roundtable meetings are really a preview for a rollback of Obama’s guidance, which said sexual assault is sex discrimination prohibited by Title IX for schools that receive federal funding.

But groups representing those who say they have been falsely accused suggest the Obama-era guidance weighted campus justice systems in favor of those alleging sexual violence. Jackson said in the Times interview that investigations have not been “fairly balanced between the accusing victim and the accused student.”

Many of those who want Obama’s guidance reversed have said they want assault cases referred to law enforcement.

Many of those who want Obama’s guidance reversed have said they want assault cases referred to law enforcement.

Jackson sought to issue reassurances that both she and the department take the position that “all sexual harassment and sexual assault must be taken seriously.”

As of Wednesday, there were 344 open sexual violence investigations at 242 postsecondary schools, according to a Title IX report provided by the Education Department.

Several schools had multiple cases pending, including Kansas State University and Indiana University at Bloomington with five each, the department list shows.

Baylor University in Texas had a single open case. The school has been embroiled in controversy over its handling of sexual assault allegations, and several women have sued. Art Briles was fired as football coach and Ken Starr was demoted from president and later resigned after a law firm reported in May 2016 that an investigation had found that the school had “created barriers” discouraging the reporting of sexual assaults.