My Eight Seconds With the ‘Hugging Saint’ 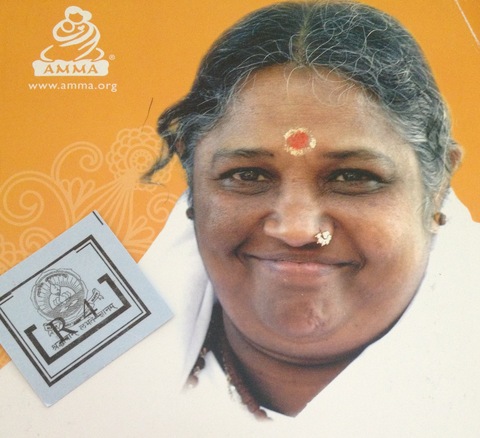 PBS NewsHour political editor Christina Bellantoni’s program and “hugging token” for her visit to a revered guru known as the “hugging saint.” Amma, a 60-year-old South Indian woman who has hugged more than 32 million people to promote love, will be in New York City until Saturday, then heads to Massachusetts to close out her summer tour.

Did I ever tell you about the time I waited 10 hours for a hug?

It all started innocently enough.

I was holding Eagle Pose at Yoga District one night, when Anna the instructor suggested her yoga students should go check out the Hindu saint of hugging.

Revered as a powerful guru, a saint and a low-level Dalai Lama, the 60-year-old South Indian woman born as Mata Amritanandamayi is now better known throughout the world as Amma, or “mother.” She has hugged more than 32 million people, all for the goal of spreading “selfless love and compassion toward all beings,” according to her website.

The site goes on to profess that Amma “inspires, uplifts, and transforms through her physical embrace, her spiritual wisdom and through her global charities, known as Embracing the World.” And Amma weighs in there about her source for energy: “Where there is true love, anything is effortless.”

It would have made perfect sense to spend my Sunday at one of Amma’s big events in Northern Virginia, but it just didn’t work with my schedule. Monday morning was out, so I figured going after work was my only option. After all, the hotel where Amma-palooza was taking place was less than two miles from our NewsHour studios.

As I pulled up Monday night, I started to get a sense of what I was in for when the hotel parking lot was completely full.

I’m sent a mile away to another lot, where I’m given an Amma parking discount. On the shuttle, everyone is ecstatic. A man is carrying a plastic plate full of gorgeous flowers he says grow wild at his home. They are for Amma. Oops — I’ve come empty-handed. I ask if they know what I’m in for. They insist it will change my life, and swear it is worth it.

Inside, the main hall is full and they aren’t handing out “hugging tokens” until after the program. So I settle into the overflow room. Amma is offering a professorial sounding revival in her native language, with a translator chiming in every few minutes.

She tells her fans, we engage in physical activity for the body but neglect the heart. The best way to stop doing that? Allow it to feel.

Love is our true nature, she tells us. And, our karma will come back to us regardless of the situation.

Then, simply: “The people who love us also expect love in return.”

A friend and I grab dinner at the hotel, with hours to go before the “hugging tokens” get handed out at 9:30 p.m. Then it’s our moment, and they hand me a laminated blue square that reads, R-4, and send me into the hall.

They’re on A-2. I ask about the process, and volunteers tell me to prepare for a long night.

I’m iffy on staying at this point, so we start exploring. There’s beautiful peppy music, often with drums played by a group at the front of the room. And on stage sits Amma, surrounded by people and wrapped in bright colors.

People are beaming as they walk away after her embrace.

We learn they will cycle through the alphabet, with numbers 1 through 5. Next up, A-3. Doesn’t seem so bad.

We snap some pictures. A volunteer is at our side in a moment, chagrined that we hadn’t followed the rules forbidding photography. There’s a small sign posted on the wall to the back of the room that neither of us had noticed. I immediately regret not taking any before being warned.

I walk my friend out, and an Amma volunteer follows us, insisting he delete any photos on his camera.

I head back into the hall, looking for something to eat. There’s delicious Indian fare at every table, and it’s affordable. Dressed in white flowing garments, vendors laugh and chat, and their children run around the hall. The whole vibe starts to remind me of a Grateful Dead show.

Around 1 a.m. I start to wander the main room again. Amma is still doing her thing. J-3.

Checking out the booths, I start to realize the depth of the Amma industrial complex. Here’s a bracelet Amma wore for an entire year! Only $1,000. Prayer beads. Postcards. Music for your iPod. That said, it’s important to note here that her foundation raises millions of dollars for good causes, and she has helped people all over the world.

There are hundreds of chairs set up facing the front of the room. Some people sleep, or meditate, but most everyone is milling about, waiting for their moment in Amma’s arms.

I get up close enough to observe. I start counting, doing the math in my head. Amma is devoting about 8 seconds per person to the “darshan.” When people come off the stage, they look re-energized. It’s 2:30 a.m. And we’re only in the L’s.

I’m texting with my best friend, who is awake on the West Coast, starting to worry I’ve lost my mind. But there’s no way I’m giving up now. I have plenty to read, and as I sometimes tell people, you can sleep when you’re dead, right?

Amma hasn’t budged all night. She doesn’t stretch, hasn’t gotten up to use the restroom and shows no sign of weariness. She’s radiant, in fact.

Close to 4 a.m. I am talking with a volunteer about the fact my work day starts in just a few hours, and I haven’t slept. I’m delirious. She lets me in around Q-2.

I think it’s because she took pity on me, though this great 2007 piece by a 2007 hugging virgin said Amma likes to prioritize newbies. Wish I’d thought of that earlier in the night.

So now I’m in line, officially. A man tells me about what to expect, and how I should behave.

He asks if I am Christian. My family has never really practiced any organized religion, and it’s not something I have ever made a priority.

“Well Amma is your god now,” he tells me. The man also says because it is my first time, I should ask the hugging saint to come up with a mantra for my new spiritual practice he is sure I’ll engage in. I do like to do yoga, and I’m open to it, so I tell the volunteers.

We’re almost there. I’m instructed to leave my belongings and remove my shoes. Nothing in my hand but my R-4 token. They ask my language. They move things along. Eight seconds. Eight seconds. My turn.

It all happened so fast, but the most memorable sensation from hugging Amma was the fact that the bright flowers on a strand around her neck were smushed into my face and forehead. They were so fragrant I wondered for a moment if they were laced, and that’s why everyone looked so happy. 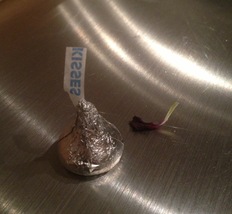 She smiled and laughed, and said “ma ma ma ma.” Then she handed me a flower petal and a Hershey kiss.

Instead of asking directly for a mantra, I couch it a bit.

Nice to meet you Amma, I tell her. They said I should ask you for a mantra.

She looks me in the eyes, reaches into an ornate bowl behind her filled with laminated cards.

It says: “Mantra.” And on the back the pre-printed text tells me I should go to the left of the stage to see a volunteer about getting one.

And then it was over. The man I’d been sitting next to had told me to take a breather when the hug ended so I could reflect on the energy Amma had transferred to my soul.

I watched the other people overcome with emotion and joy and wished for a moment I had such faith in something.

I’m basically delirious and all I can think about is the fact I need to be writing the Morning Line in less than three hours. But at this point, I’ve gone too far to turn back now.

So I follow the directions on the “Mantra” card and head to the mantra circle. A man smiles as he beckons for me to sit down next to a woman not much older than me. I’d seen her earlier with her child.

The woman is crying. This is someone who knows heartbreak, I think.

We’re given some options for a sort of preamble to the mantra Amma would be giving to us.

We can choose divine love, compassion, patience, peace, and so on.

I’m less sure, but opted for peace because it’s what I need today.

We return to the stage, this time to Amma’s right.

We have plenty of time to sit and observe what’s happening.

Children bring Amma presents — mostly apples — and she continues beaming her radiant smile on everyone around her, even as the conveyor belt of huggers chugs along.

Maybe it’s because we’re reaching the end of the night, or perhaps because there are fewer people listening, but I’m able to pick up on a lot of the internal Amma bureaucracy. (I won’t give away any trade secrets, though it’s really not that interesting.)

There’s a lot of matter of factness up here.

Timekeepers are literally tracking the minutes that people are sitting in quiet reflection. 15 and you’re up, make room for the next person to sit cross-legged.

It’s my turn to feel Amma’s embrace once more. Someone hands her the scrap of paper reading “Peace” and she looks closely at my face. Then she’s speaking again, repeating the words that would become my mantra. It all happened so fast, what I remember was Amma taking a handful of flower petals, smashing them into the back of my hair and twirling them around in a circle while declaring, “Shante!” A man is there with a laptop, jotting down what she’s said.

Within seconds, I’m whisked away again. The scrap of paper back in my hand, I deliver it to the next volunteer. He observes what Amma has said and the lone word “Peace” and thumbs through a box of what look to be color-coded index cards.

There are four symbols above four words that the volunteer made sure I could pronounce before leaving the stage. Not well enough, apparently, because the woman and I were sent to mantra training.

Yet another volunteer, smiling widely despite dawn peeking at us from outside the hotel, explained to us that we were special to have been chosen by Amma for a mantra. He taught us how to say it, at least 108 times per day, and preferably while using mala beads.

So, what is my mantra?

It’s a secret, they insisted. I had figured I would honor that, but Googled it while writing this piece anyway. I can’t seem to find an exact translation, though I did find this totally groovy video.

I haven’t sat down yet to follow the exact instructions, but I figure I will given that I’m about to go on a relaxing vacation. No better time to strive for peace, right?

In the meantime, perhaps the lesson I draw from the experience is even simpler. If you’re blessed with your freedom, presented with the opportunity to do something different, just say “Why not?”