A gunman opened fire on Umpqua Community College in southwest Oregon on Thursday, killing nine and injuring an additional seven, according to the Associated Press. The shooter, who has been identified as 26-year-old Chris Harper Mercer, died after exchanging gunfire with police.

Douglas County Sheriff John Hanlin said the names of those killed would not be released until Friday and refrained from revealing any information about the shooter.

“I will not give him the credit he probably sought prior to this horrific and cowardly act,” Hanlin said.

Douglas County Sheriff John Hanlin confirmed on Thursday that 10 people, including the gunman, had been killed in a deadly mass shooting at Umpqua Community College. 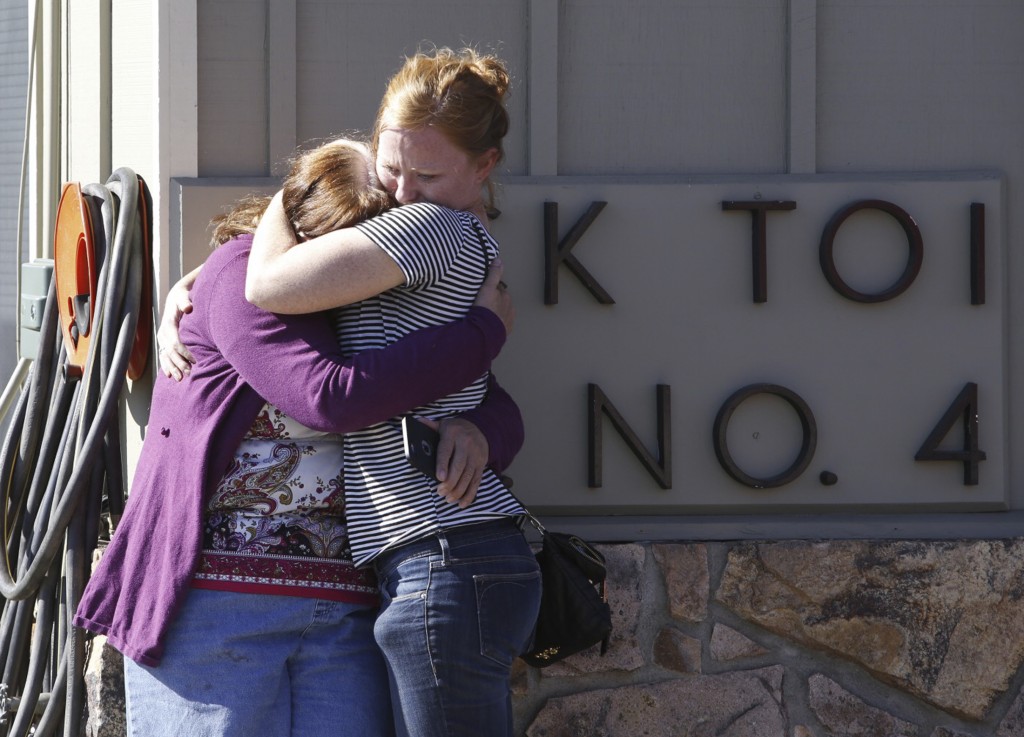 The New York Times reports that violence was concentrated in a public speaking class in a humanities building and that people fled in panic as shots rang out. The shooting occurred just four days into the school year. 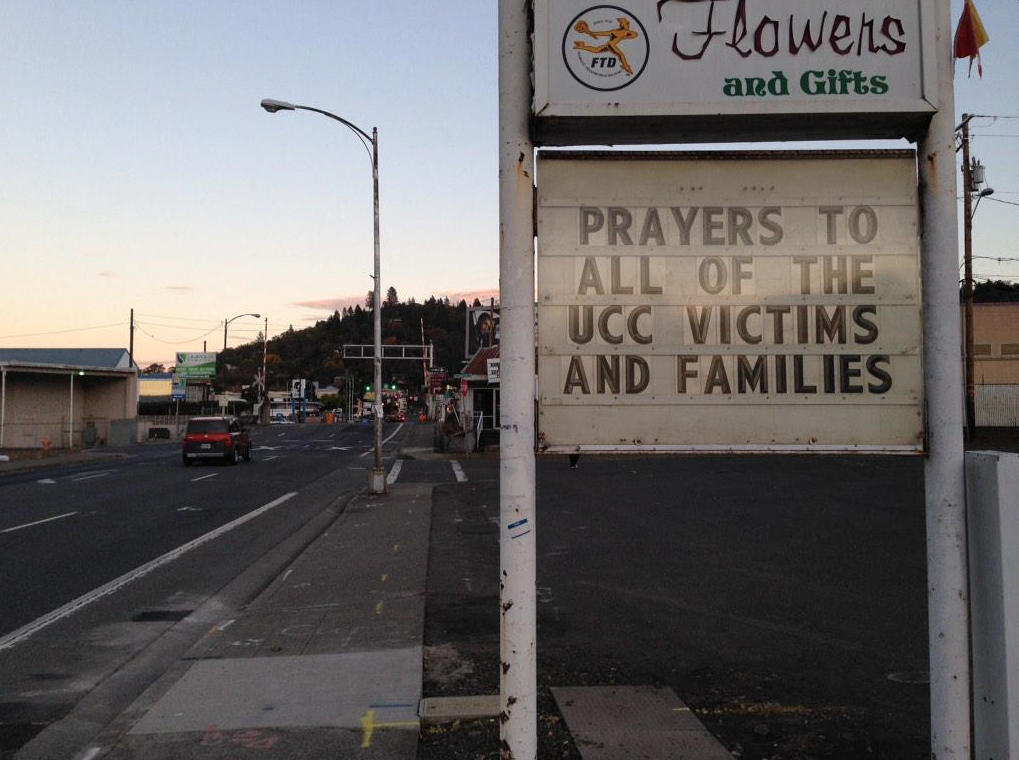 Law enforcement officials said the gunman had three weapons, “at least one of them a long gun and the other ones handguns,” according to the Times.

PBS NewsHour’s Cat Wise, on the scene in Roseburg, Oregon, spoke to Sarah Cobb, a 17-year-old student who said she was in the classroom adjacent to the shooting. She described hearing a loud bang next door, like the sound of a book dropping on the floor, she said.

Her teacher approached a closed door connecting the two classrooms and called out: “Are you OK?” At that point, they heard shots fired, and she and her class quickly left the building. Cobb and her classmates gathered at the student center before they were bussed out by officials.

In another classroom, Cassandra Welding “heard a popping noise, almost like a balloon popping,” she told CNN’s Wolf Blitzer. “I knew something wasn’t right and so I get down.”

She said the students in her classroom locked the doors, turned off the lights and hid under tables and chairs. “We called 911 and called our parents, our loved ones. … We didn’t know what was going to happen, if those were our last words or not.”

Hannah Miles, 19, said she and other students hid in the back room of a bookshop. “No one really was sure what was going on,” she said, according to the BBC. “The next thing we knew, there were three or four more gun shots and everybody just looked at each other and we knew.”

“We are a community college in the best sense of the word,” said Rita Cavin, Umpqua Community College’s interim president, reported The Oregonian. “Things like this last forever. It’s an emotional scar for the college.”

Authorities responded to the scene after first receiving a call at 10:38 a.m. 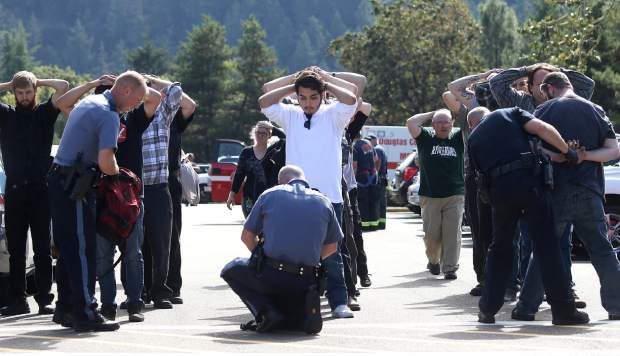 A group of people are searched following the shooting at Umpqua Community College. Photo by Michael Sullivan/News-Review

“We are the only advanced country on Earth that sees these mass shootings every few months,” the president said.

Umpqua Community College is located near Roseburg, Oregon, about 180 miles south of Portland, Oregon. The school has enrolled about 3,300 full-time students and another 16,000 part-time students. 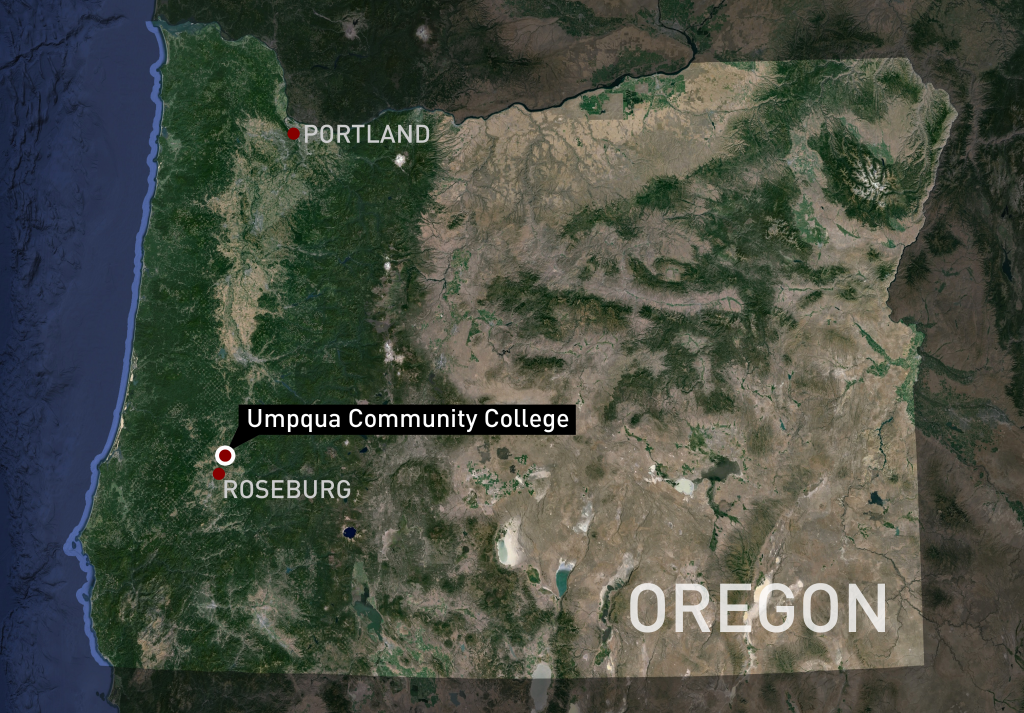 Students and staff were bussed to the Douglas County Fairgrounds, where Red Cross is treating them. As they departed campus, authorities searched their bags, according to News-Review photojournalist Michael Sullivan.

Authorities check bags as students and staff are moved off campus at Umpqua Community College after shooting report. pic.twitter.com/BvvHh0UYqN

Reactions to the shooting emerged on social media, from Oregon Senators Jeff Merkley and Ron Wyden.

Horrific news from Umpqua Community College in Roseburg. My heart and prayers are with the victims and their families.

Oregonians everywhere want Roseburg to know we're praying for them.

I order all flags at OR public institutions immediately lowered to half-staff in honor of the victims at Umpqua CC http://t.co/AYqvu4p4C6

You can see updates from her and other officials, journalists and people on the ground by following the list below.

Presidents have leeway to use military for domestic purposes

WATCH: DC Mayor Muriel Bowser says she ‘didn’t see any provocation’ to warrant use of munitions on protesters