LOUISVILLE, Ky. — She flipped through television channels and radio stations, scanning from conservative to liberal media, searching for any sign that the polarized nation had finally reached its tipping point.

For days, Elisa Karem Parker had been seeing updates in the news: A pipe bomb sent to liberal political donor George Soros. One delivered to CNN. More to former President Barack Obama, Hillary Clinton and other prominent political figures villainized by those on the right — a bizarre plot unfolding just ahead of the midterm election that will decide which party controls Congress.

“It’s like our country is becoming ‘The Hunger Games,’” Parker, who considers herself squarely in the middle of the political divide, told her husband and teenage son over dinner.

As authorities intercepted more than a dozen pipe bombs addressed to President Donald Trump’s most ardent critics, political scientists and ordinary Americans observed, again, that rabid partisanship had devolved to the point of acts of violent extremism. Many wonder whether this latest spasm might be the moment that the nation collectively considers how poisonous the political culture has become and decides to turn the other way.

“If this isn’t it, I’d hate to think about what it will take,” said Parker as she cast her ballot in early voting last week in Louisville, Kentucky. 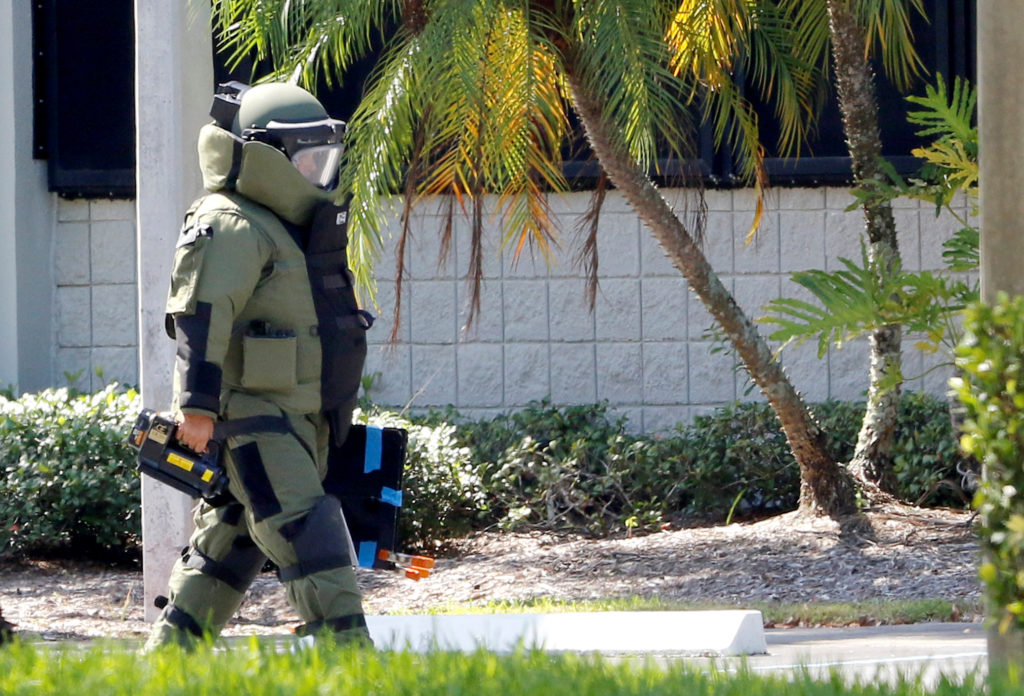 The mail-bomb plot is merely the latest in a series of stunning attacks to test how much political animosity Americans are willing to accept: the shooting of a Republican congressman at a baseball practice , the white supremacist rally that turned deadly in Virginia, the recent ricin scare-letters mailed to Trump and other top members of his administration.

On Friday, authorities arrested a suspect in the bomb probe — a 56-year-old registered Republican and Trump enthusiast who “appears to be a partisan,” Attorney General Jeff Sessions said when asked about motive. By then, politicians and talking heads had already backed into the usual corners: Both parties blamed the other, and the president called for unity, then again described liberals and the media as villains. The hope Parker had that this might be a turning point faded.

And then, on Saturday, news broke of a mass shooting at a Pittsburgh synagogue, an attack likely to cause ugly partisan debates over gun control, hate speech and more.

The volatile tribalism now so ingrained in American life will eventually right itself, says Robb Willer, a sociology professor at Stanford University, but not until the public decides it’s had enough and stops rewarding politicians who use incendiary language and demonize the other side. It’s impossible to guess, he notes, how much damage will be done in the meantime.

“That is the question of our time: Are we going to choose to continue the war, or are we going to choose peace? And we don’t know yet what the answer to that will be, because while a majority of Americans are fed up with the extremity of our political divisions, it does feel like we’re stuck here,” Willer says. “It will get worse before it gets better.”

Animosity between parties has been growing for decades now, to the point that studies show Republicans and Democrats don’t want to date one another, don’t want their children to marry one another and don’t want to live in the same neighborhoods at a rate unprecedented in modern America. At the same time, politicians began using increasingly apocalyptic language. Willer says those two forces — the splintering of society along party lines and the ascent of vitriolic campaigning — merged to create a breeding ground for violence.

“It was simmering,” says Parker. “It’s like the gas burner was on, then Trump lit the fire.”

The president vaulted to political prominence by promoting the racist and false conspiracy theory that Obama was not born in the United States, launched his presidential campaign by calling Mexicans rapists and murderers, and routinely describes his enemies, including the intended recipients of the pipe bombs, as “evil,” ″dangerous,” ″the enemy of the American people.”

“That let loose a period of incivility, which is too mild a word; it’s potentially explosive anger that can turn into violence,” says Bob Shrum, a former Democratic strategist who last month started the Center for the Political Future, a program at the University of Southern California designed to restore sanity and bipartisanship in politics.

He’s watched with frustration as some liberal politicians respond to Trump’s presidency by imitating his divisive style. He describes it as a “cold civil war,” where people consider those who disagree with them bad, un-American — their enemy.

“Is there a tipping point? I don’t know,” he says. “I do believe we’re in a dangerous moment, unlike anything I’ve seen in my lifetime, and I’m 75 years old.”

There is little evidence the tide will turn soon.

Moderates are becoming increasingly rare in Washington, D.C., and Republicans willing to criticize Trump’s rhetoric, such as Sen. Jeff Flake of Arizona and Sen. Bob Corker of Tennessee, are not running for re-election.

“You don’t really have those reasonable voices kind of trying to bring everybody together,” says Tom Freeman, a Republican attorney in Lincoln, Nebraska. “It’s just kind of round and round we go, and the sides just get more and more extreme, and you don’t have that rational leader in the crowd saying, ‘Hey, let’s dial it back.’ The sad thing is, if you did have that person, I don’t know that anyone would listen to them.”

The polarization is bleeding into everyday Americans’ personal lives.

Robert Major, a 51-year-old electrician and Republican from Fort Lauderdale, Florida, says he once moved because his landlord, a liberal, screamed at him for watching conservative news channels.

Meeka Grayer, a 38-year-old radio talk show host and Democrat from Omaha, Nebraska, lost friends over the divide. One conservative friend posted on Facebook about the migrant caravan heading toward the United States from Central America, parroting the president’s vilification of the group. Grayer objected and was attacked for her comments, prompting her to block her friend.

Though on opposite sides politically, Grayer and Major agree: The political climate is toxic and tiresome, but they have little confidence it will change because it’s too useful to politicians who want to stay in power.

“I think it’s time for the little guy to take control, but will that happen?” says Randy Wick, a 68-year-old Republican in Bloomingdale, Illinois, who blames Republicans, Democrats and the media for the division. “It seems like a good ol’ boys club up there in Washington. It’s all about money.”

Willer, the Stanford sociologist, says the absence of political leaders brave enough to try to steer the country onto a better path means it will be left up to voters to break the cycle. Until then, the divisions will only get deeper.

Some already casting votes for the Nov. 6 midterm election say they hope the system can self-correct. The future of the nation, the very concept of democracy, is at stake.

“America is resilient; we find a way even in our darkest days,” 36-year-old Cordell Lawrence said as he voted last week in Louisville. Lawrence described himself only as a moderate, preferring not to make public what party he leans to because he worries that could hinder personal and professional relationships.

“Maybe we have to hit rock bottom before we find how to get back up,” he said. “We’re probably pretty close to rock bottom today. At least I hope we are.”