“We are in a position to say it’s contained. We feel comfortable with the efforts that have been made by our firefighters,” Jefferson County Judge Jeff Branick said at a news conference in Port Neches, about 80 miles (129 kilometers) east of Houston.

But the area around the TPC Group plant remained dangerous. Several isolated fires were still blazing and visible at the facility, which makes chemical and petroleum-based products. Officials said they could not predict when those would be fully extinguished.

The explosions began early Wednesday morning and were so big that nearby homes captured the bright balls of fire on front-porch security cameras. The blasts shattered windows and ripped doors off hinges. Three workers were injured, and when a second blast erupted 13 hours after the initial overnight explosion, evacuation orders covered a 4-mile (6.4-kilometer) radius around the plant took effect. 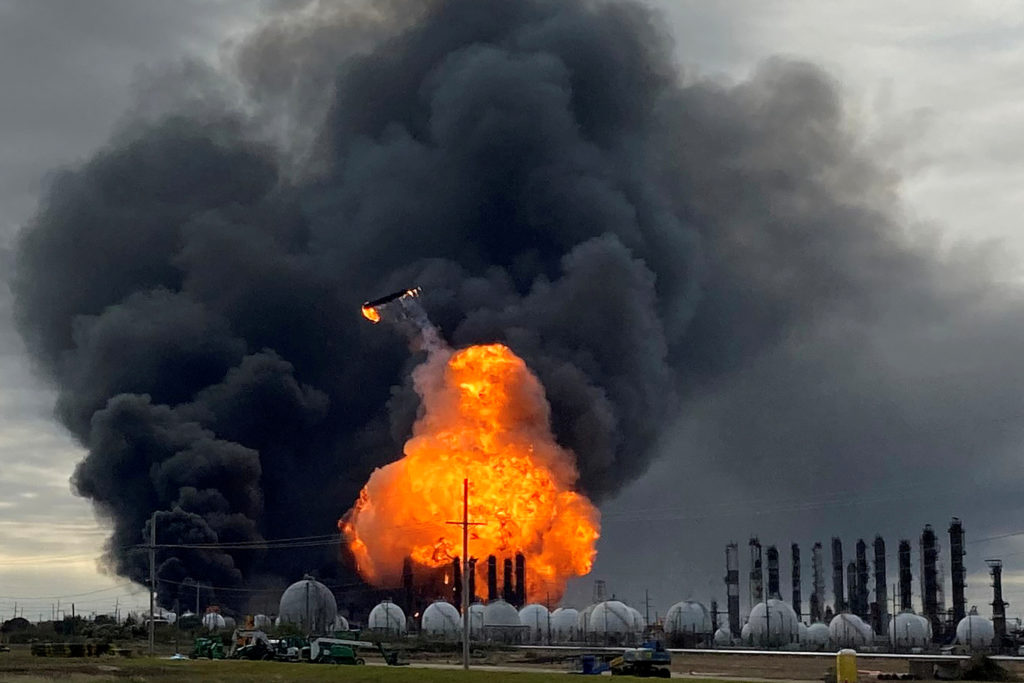 FILE PHOTO: A process tower flies through air after exploding at the TPC Group Petrochemical Plant, after an earlier massive explosion sparked a blaze at the plant in Port Neches, Texas, on November 27, 2019. Photo by Erwin Seba/Reuters

Debris thrown across Port Neches — and potentially neighboring towns — by the sheer magnitude of Wednesday’s explosions also posed risks to families returning home. Branick, the top county official, cautioned that construction on the plant began in the 1940s and that asbestos could have been hurled into people’s yards. He urged homeowners to steer clear of any “white, chalky substance” and call health officials if any are found.

Branick said it may be several months before the cause of the explosions is known. He said the air quality posed no threat to residents.

The explosion was the latest in a series of high-profile accidents this year up and down the Texas Gulf Coast, which is home to the highest concentration of oil refineries in the nation. In July, an explosion at an ExxonMobil refinery in Baytown left more than dozen people with minor injuries and put nearby residents under a shelter-in-place for three hours.

Toby Baker, the head of the Texas Commission on Environmental Quality, called it an “unacceptable trend of significant incidents” this week and said the petroleum industry must be accountable.

But environmental groups for years have accused Baker’s agency of being a toothless watchdog that provides inadequate oversight and slaps highly profitable corporations with only meager penalties. The TPC Group plant had been labeled a “high priority” violator by the U.S. Environmental Protection Agency following its last inspection in 2017 and had been cited multiple times in recent years for clean air violations.

Environmentalists were also quick to point out that the TPC Group explosion occurred just a week after the Trump administration scaled back chemical safety plant measures that had been prompted by a 2013 explosion at a Texas fertilizer storage facility that killed 15 people. The rollback included eliminating a required public access to information about dangerous chemicals companies keep on site.

Officials have said the first blast occurred around 1 a.m. Wednesday in an area of the plant that makes butadiene, a chemical used to make synthetic rubber and other products. It sent a large plume of smoke stretching for miles and started a fire. The second blast ripped through the plant about 2 p.m., sending a steel reactor tower rocketing high into the air.

The plant has 175 full-time employees and 50 contract workers.

Left: FILE PHOTO: Flames rise over a petrochemical plant after an explosion in a still image from video in Port Neches, Texas, U.S. November 27, 2019. 12NewsNow.com via Reuters