A forensic expert hired by the family of 12-year-old Tamir Rice said the boy did not reach for a pellet gun when he was shot by Cleveland police last year. 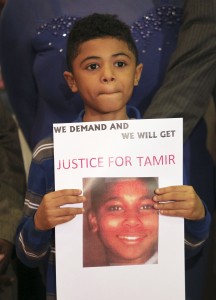 A boy holds a sign in support of Tamir Rice, the 12-year old boy who was fatally shot by police last year while carrying what turned out to be a toy gun. Photo by Aaron Josefczyk/Reuters

The claim counters statements made by a white police officer, Timothy Loehmann, that he saw the African American boy reach for a gun in his waistband last November when he opened fire less than two seconds into the engagement.

The expert, Jesse L. Wobrock, who reviewed a frame-by-frame video of the shooting, indicated Rice did not have time to remove his hands from his pocket.

Wobrock also found that Rice could not have heard police commands to show his hands because the windows in Loehmann’s patrol car were rolled up, and that the toy gun was not visible when he and another officer arrived on the scene during daylight hours.

“The scientific analysis and timing involved do not support any claim that there was a meaningful exchange between Officer Loehmann and Tamir Rice before he was shot,” Wobrock said.

The officers responded to a 911 report that “a guy with a pistol” was seen near a recreation center when Rice was shot, according to the Cleveland Plain Dealer.

The report also stated the gun was “probably fake” before Loehmann and his partner arrived on scene, within feet feet of Rice.

Rice’s family has launched a wrongful death lawsuit against Loehmann and the city of Cleveland, while a grand jury is reviewing the case and may bring criminal charges against the officer.

Rice’s shooting has also drawn the support of the Black Lives Matter movement, which has often used the incident to highlight excessive force by police against African Americans around the country.

In June, a Cleveland judge who reviewed video evidence said he found grounds to prosecute Loehmann “with murder, manslaughter and reckless homicide,” while his partner Officer Frank Garmback could face reckless homicide and dereliction of duty charges.