The family of Terence Crutcher, an unarmed black man who was fatally shot by an Oklahoma police officer last year, filed a federal civil rights lawsuit Thursday, stating the encounter demonstrated an excessive use of force, Tulsa World reported.

The lawsuit, filed in Tulsa on behalf of Crutcher’s family, pushes for department-wide police reform, stating, “The dangers police officers generally face also do not provide a license to police officers to ‘shoot first and ask questions later,’ without properly evaluating the need for such force.”

The reforms include mandatory training for officers dealing with suspects under the influence of substances or those with mental health issues. The family is also seeking $75,000 in damages, along with punitive damages.

In May, a jury found Tulsa police officer Betty Jo Shelby not guilty of first-degree manslaughter in the death of the 40-year-old man.

Shelby, who is white, said in her testimony that she opened fire on Crutcher when he reached into his SUV, thinking he was looking for a gun. Tulsa police recovered no weapon from the vehicle, which was blocking a road.

Footage of the encounter was captured on video, via a police helicopter and patrol car dashcam. Crutcher is seen walking away from officers, including Shelby, with his hands above his head. After the shooting, Shelby said Crutcher did not comply with orders to lie down. 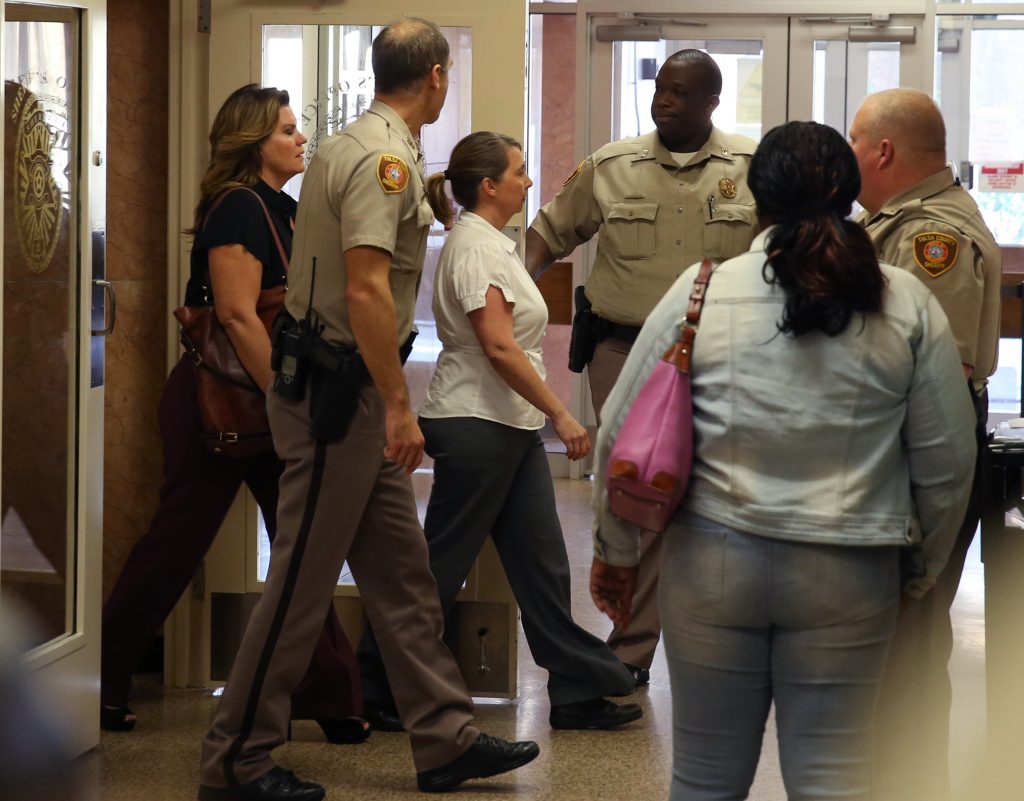 Tulsa police officer Betty Shelby arrives for her arraignment after she was charged with manslaughter in the death of Terence Crutcher, at Tulsa County Courthouse in Tulsa, Oklahoma, in September 2016. Photo by Richard Rowe/Reuters

In a letter penned by the jury’s foreman, the jurors said the officer reacted according to police training, but also said they were not “comfortable with the concept of Betty Shelby being blameless.”

The jurors said she could have done more to ease tensions in the encounter, including using her stun gun rather than a firearm. Shelby’s backing officer at the scene did deploy a stun gun at the same time of the shooting.

“Let it be known that I believe in my heart that Betty Shelby got away with murder, and I don’t know what was in the mind of that jury,” Crutcher’s father Joseph told reporters.

Shelby returned to work in an administrative role shortly after her acquittal. A pending investigation has yet to determine if she will be reinstated in a “patrol capacity.”

Shelby’s acquittal prompted anger from Crutcher’s family, who promised to pursue a civil lawsuit at the time.