More than 180,000 people were evacuated from their homes in northern California on Sunday after engineers worried the emergency spillway for the already-overflowing Lake Oroville would collapse, threatening to unleash billions of gallons of water into neighborhoods below.

Water levels in Lake Oroville, 75 miles north of Sacramento, exceeded capacity Saturday morning because officials could not release enough water from the regular spillway, which was damaged last week by a 300-foot sinkhole. As a result, water began overflowing into the emergency spillway at Oroville Dam — the tallest in the country — for the first time since its construction in 1968.

Gov. Brown issued an emergency order Sunday to “bolster the state’s response” to the issue after engineers discovered erosion in an emergency spillway that controls overflow from lake. The order included activating assistance from California’s National Guard.

“I recognize how tough this situation is on people,” Butte County Sheriff Kory Honea said this weekend in a news conference. “I recognize that we’ve had to displace a lot of people, but as you’ve heard tonight we needed to do that to ensure the public safety.”

Engineers worried the fast-moving water could undercut the 1,730 foot concrete lip at the top of the emergency spillway, resulting in a collapse of the structure followed by an uncontrolled release of billions of gallons of water into residential areas. 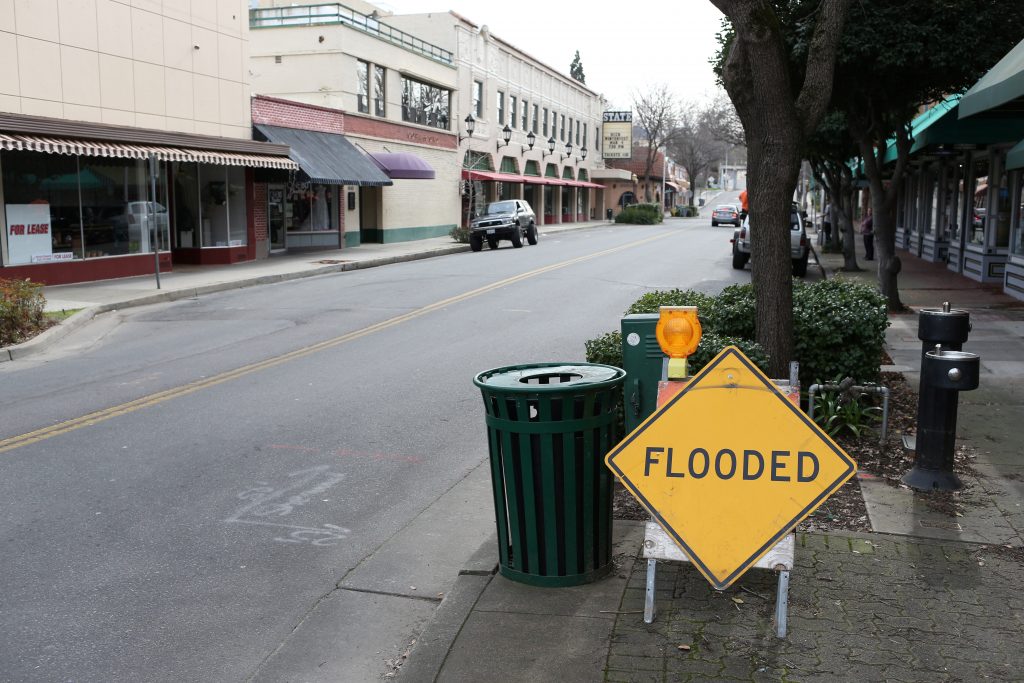 The city of Oroville is empty after an evacuation was ordered for communities downstream from the Lake Oroville Dam, in Oroville, California. Photo by Beck Diefenbach/Reuters

The Oroville Dam, separate from the auxiliary spillway, is structurally sound, Department of Water Resources officials said in a statement Sunday.

Some environmental groups had warned of this problem years ago. The Mercury News says three environmental groups filed a motion with the federal government in 2005 requesting that the auxiliary spillway be reinforced with concrete. They warned heavy rains could force officials to use the emergency spillway and erosion could result in potentially deadly flooding. At the time, officials rejected the motion, expressing confidence in the spillway’s design.

When the environmental groups filed the motion, officials said the emergency spillway could handle a water flow between 250,000 to 350,000 cubic feet per second. On Sunday, the erosion that prompted the evacuation was caused by 6,000-12,000 cfs — less than 5 percent of the maximum cited by the officials.

On Sunday afternoon, the Department of Water Resources upped the water flow in the main spillway, which is still damaged by a sinkhole, to 100,000 cfs. Water levels have since receded below the reservoir’s capacity and have stopped entering the emergency spillway.

Another storm is expected to bring heavy rains to the area again Wednesday night. Officials are trying to continue lowering water levels in the reservoir to at least 50 feet below capacity, which they hope will help avoid further use of the damaged emergency spillway.