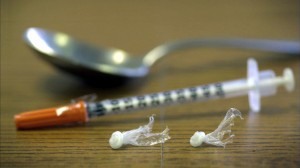 WASHINGTON — The government is taking a step to let friends or loved ones treat someone they suspect has overdosed on heroin or powerful painkillers called opioids, while they’re waiting on medical care.

The Food and Drug Administration on Thursday approved an overdose antidote that doctors could prescribe for family members or caregivers to keep on hand, in a pocket or medicine cabinet. Called Evzio, it’s a device that automatically injects the right dose of the drug naloxone, a long-used antidote for opioid overdoses.

Nalaxone has been a mainstay of overdose treatment for years, usually administered by syringe in ambulances or emergency rooms. But with the rise in drug overdose deaths, there has been a growing push to equip more people with the protection as well.

New, cheaper heroin has flooded drug markets across the nation to serve addicts who are seeking more easily-available drugs after the FDA’s crackdown on prescription painkiller abuse. In February, Jeffrey Brown spoke with National Drug Control Policy director R. Gil Kerlikowske and Los Angeles Times reporter Sam Quinones about why heroin use in America has doubled since 2007 and the deadly consequences for users and addicts.