Is the Federal Reserve printing a free lunch?

Editor’s Note: Federal Reserve-watchers are expecting the central bank to draw down its purchases of Treasury bonds and mortgage-backed securities by another $10 billion Wednesday. By next month’s Federal Open Market Committee meeting, the quantitative easing program that started making $85 billion a month in purchases after the 2008 financial crisis is expected to be over.

The restaurant will be closed, and with that will end the free lunch the U.S. government has been feeding off, says Making Sen$e regular contributor Terry Burnham. As he writes on Wednesday — the last day of the FOMC’s two-day meeting in Washington, DC — “the government overspends by trillions and the Fed pays for the expenditures with newly created money.” So “actually,” he continues, “the lunch is better than free, as it saved the U.S. government more than $400 billion this year alone.”

Burnham has been a frequent critic of the government’s money printing, even comparing it to the Stockholm Syndrome. He welcomes the end of bond buying and the Fed’s very low interest rates, and questions just how free the lunch has been.

Burnham is a former Goldman Sachs trader, biotech entrepreneur, money manager and economics professor at Harvard’s Business School and Kennedy School of Government. He now teaches at Chapman College. On this page, he’s most famous for his prediction that the Dow will hit 5,000 before it hits 20,000.

“US set for lowest budget deficit since 2008” reads a recent CBS headline.

This year’s U.S. budget deficit is estimated to be $506 billion. While this is a large amount in absolute terms it is much smaller than deficits in recent years. This relative dearth of red ink has led Paul Krugman to crow, “Bad news for Dr. Evil fans: the days of a ONE TRILLION DOLLAR deficit are over. In fact, the deficit is falling fast.”

“If the budget deficit is low because of monetary manipulations, is the improvement real and sustainable?”

One way the Fed could decrease the budget deficit would be by adding jobs and having those newly employed people stop receiving government support and start paying taxes. But even if Federal Reserve policies did not create a single job, the central bank may still have cut this year’s budget deficit almost in half. More on that calculation in a moment.

If the Federal Reserve did dramatically decrease the budget deficit, is it a free lunch? “There’s No Such Thing as a Free Lunch” is a conceptual cornerstone of economics, with Nobel Laureate Milton Friedman writing a book of the same title. Professor Friedman died in 2006, but YouTube has an almost hour-long talk of his arguing against the existence of free lunches.

So who is right, Janet Yellen or Milton Friedman?

Let us consider the possibility of a monetary free lunch in two parts. First, how did the Fed decrease the U.S. budget deficit so dramatically? And, second, is the Fed really serving up a free lunch?

Let us begin by investigating how the Fed has dramatically cut the U.S. budget deficit. Fed policies, independent of employment effects, reduce the deficit in two ways.

Why low interest rates are the real monster

Second, the government may be paying a lot less in interest because of Fed policies. Indeed, quantitative easing is designed to lower interest rates. The stated goal of the Fed’s efforts to keep rates low is to help private sector borrowers, such as home buyers who want mortgages. Low mortgage rates lead to high home prices, which lead to more new homes built, which finally, leads to more jobs for people who build homes.

However, low rates help all borrowers reduce their interest payments, and the U.S. Treasury is by far the largest borrower in America.

Let us measure the impact of these two channels. Last year, the Fed sent $77.7 billion back to the Treasury. The Fed spent about $4 billion dollars on salaries, facilities and other expenses. Against these costs, the Fed “earned” about $82 billion. The $82 billion is interest on the bonds that the Fed has purchased by quantitative easing. (To paraphrase pop music, “Get your money for nothing and your checks for free.”)

This year the Fed will likely send even more money to the Treasury because the Fed’s bond pile is much larger than it was a year ago. Furthermore, while interest rates are still low, they have risen about one percentage point from their 2012 lows. Thus, this year the Fed will earn more interest on its swelling quantitative-easing treasure trove than last year.

Ben Bernanke as Easter Bunny: Why the Fed Can’t Prevent the Coming Crash

Because of enormous budget deficits, the amount of U.S. government debt in public hands has now risen to $11.9 trillion. However, interest rates are much lower now than they were in 2007. In spite of nearly tripling its debt, the U.S. government is paying less interest now than it did in 2007. If the government instead had to pay the same 4.9 percent rate as it did in 2007, the interest cost would have been $356 billion higher this year.

Without the Fed’s unusual policies, Dr. Evil fans would still be taunting Paul Krugman instead of vice versa.

Did the Fed really reduce the budget deficit by $409 billion?

On the other hand, perhaps the impact of Fed policy is even more than $409 billion. In a previous post, I noted that the government is on an historic “spending spree that has increased total government debt by almost $10 trillion in a decade — more in the last decade than in the entire prior history of the U.S.” Without quantitative easing, perhaps interest rates would have been higher than 4.9 percent to induce extra buyers to own all these extra government bonds.

Is your money safe at the bank? An economist says ‘no’ and withdraws his

Even if we cannot know for sure what interest rates would be without unusual Fed policies, we can observe that the current 10-year Treasury yield of 2.6 percent is very low. One reason for these low rates might be the Fed purchases under quantitative easing.

The magnitude of quantitative easing is staggering. In fact, the Fed has monetized 40 percent of the cumulative new issuance of federal debt since 2007. “Monetized” means that the Fed has created new money by waving its electronic wand, and used that new money to buy Treasury and mortgage bonds.

Since 2007, the Federal government has issued $8.7 trillion in additional debt and the Fed has monetized an additional $3.5 trillion by creating new money. 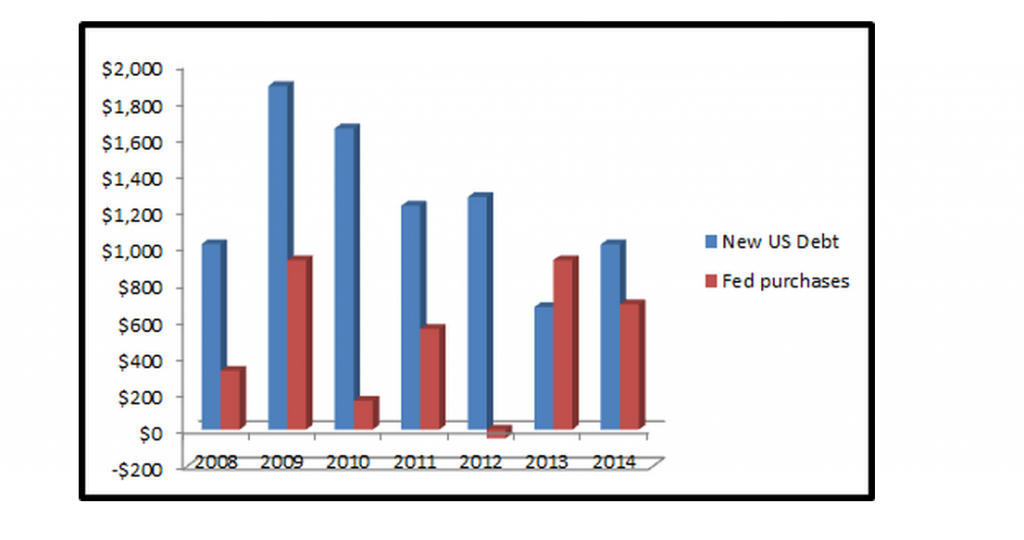 Graph courtesy of the author

Now consider that the Fed may actually have a positive impact on the economy beyond financial engineering and financial repression. Perhaps the Fed is actually responsible for some of the jobs that have been created since 2007. Under this decidedly non-Austrian view, the Fed creates money, it uses that money to buy U.S. government debt, and monetary policy provides the lubrication for stimulative fiscal policy as well.

So here is the potential free lunch. The government overspends by trillions and the Fed pays for the expenditures with newly created money. Actually, the lunch is better than free, as it saved the U.S. government more than $400 billion this year alone.

This raises two questions. First, if the lunch is free, why close the restaurant? Second, can the road to non-serfdom really be paved with electronic dollars?

The Fed is planning to end additional new purchases of bonds at its October 2014 meeting — just next month. Why end the free lunch?

“The beauty of creating money for nothing is there is no limit to how much the Fed can create.”

Rather, why not increase the scale of quantitative easing by, for example, monetizing the remaining $11.9 trillion of public U.S. debt. In fact, why stop there, why not buy up all the U.S. government debt and some trillions of other assets — stocks, private bonds, real estate and more. With an even larger investment pile, the Fed could send hundreds of billions of dollars in proceeds every year to the U.S. government. The beauty of creating money for nothing is there is no limit to how much the Fed can create.

But one reason not to monetize on a larger scale might be that there would be costs to greater monetization. Perhaps like goldilocks and Arthur Laffer in his eponymous tax curve, the Fed has found the optimal amount of monetary creation. Yes, $4 trillion is great, but an extra $12 trillion to remove all federal debt would be too much.

And yet, the proponents of current Fed policies mention no large costs to monetization, so one wonders why they would stop now.

It comes down to whether the monetization lunch is actually free. Are there hidden costs in the economy today, or, alternatively, will the economy crash in the future because of these Fed actions?

The uncomfortable truth is that no one knows the total impact of current Fed policies. The tax-and-spend policies of the 1970s have been repudiated; Instead, we are running a giant print-and-spend experiment with our lives, and those of our children and grandchildren.

“There ain’t no such thing as a free lunch.”

While no one knows what will happen, I think Milton Friedman is right. There ain’t no such thing as a free lunch.

Therefore, I continue to believe that this grand Keynesian experiment will end in tears. Furthermore, when it ends badly, future generations will not be able to believe our stupidity. They will ask, “So your plan to solve the problem of overspending and too much debt was to have the Fed create a lot of money to enable much greater amounts of overspending and debt accumulation? Who was running the asylum, the evil doctors or the patients?”

For more about how the Federal Open Market Committee will reach their policy decision Wednesday, watch Paul’s simulation of a committee meeting from March 1994.

Left: Is the Fed's quantitative easing program, which they're expected to draw down yet again Wednesday, cutting the U.S. budget deficit? Photo by Flickr user Surat Lozowick.