Felony conviction rates are up nationwide. These states are reconsidering how they classify crimes

In recent decades, every state has seen a dramatic increase in the share of its population convicted of a felony, leaving more people facing hurdles in finding a job and a place to live and prompting some states to revisit how they classify crimes.

In Georgia, 15 percent of the adult population was a felon in 2010, up from around 4 percent in 1980. The rate was above 10 percent in Florida, Indiana, Louisiana and Texas.

Less than 5 percent of the population in Maine, Nebraska, New Hampshire, New York, Utah and West Virginia were felons, but every state had a large increase between 1980 and 2010, when the felony population ranged from 1 to 5 percent, according to a University of Georgia study published in October.

The new estimates only go through 2010, before many states began to reclassify some crimes, scale back sentencing and take other steps to lower incarceration rates and ease ex-offenders back into society. But they are the first attempt to gauge the state-by-state buildup of felons during a nationwide, decades-long surge in punishment: Less than 2 million people were in prison or jail or on parole or probation in 1980, compared with more than 7 million in 2007. 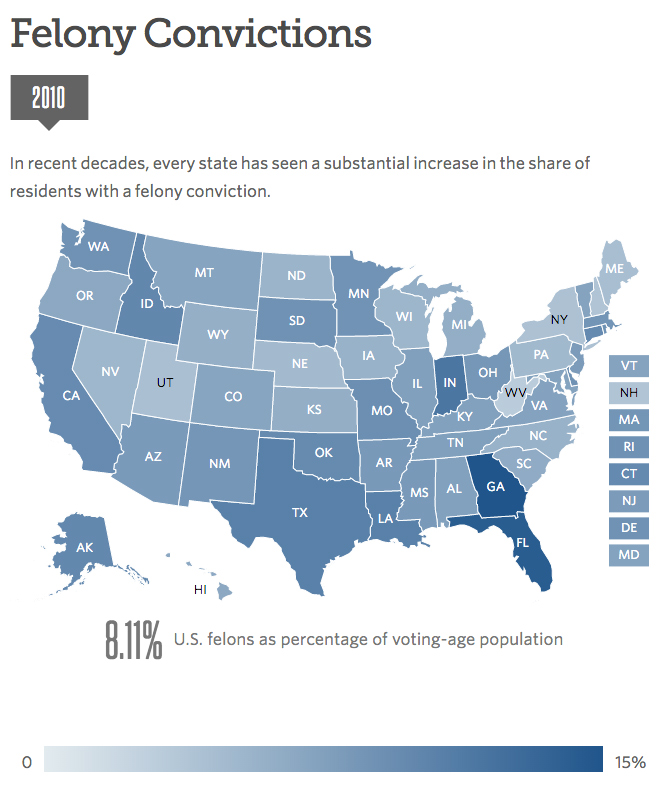 John Pfaff, a law professor at Fordham University, called the study “incredibly important,” but noted that with many gaps in information provided by states, further study may be needed to ensure an accurate picture. Nonetheless, he said, some of the state differences make intuitive sense.

“Georgia has been trying to get people out of prison with probation, but we’re seeing that even with probation they’re still getting that record,” Pfaff said. It’s possible that in states with relatively small black populations like West Virginia and New Hampshire, “without that racial divide between a white correctional system and a poor black population, it may be no coincidence that there’s a lower felony rate,” he said.

Proponents of more lenient sentencing tend to focus on imprisonment, where Louisiana and Oklahoma have the highest rates, but probation is more common.

There were 1.9 million people on felony probation in 2015, compared to 1.5 million in prison. In 2010, the two figures were about the same, at 1.6 million, according to the latest federal statistics.

Many view probation as a more humane alternative to imprisonment, said Michelle Phelps, an assistant professor of sociology at the University of Minnesota. But in some states probation has become a “net widener” that draws more nonviolent criminals into the stigma and harsh supervision of a felony conviction.

Phelps pointed to Minnesota, which has one of the lowest rates of imprisonment, but ranked 16th for felon population in 2010. That year felons were about 9 percent of Minnesota’s population, or nearly quadruple the rate in 1980.

“Though it’s frequently dismissed as a slap on the wrist, probation can entail onerous requirements,” Phelps said. For instance, probation can require a job and good housing as a condition for staying out of prison, but the felony conviction itself can make it hard or impossible to get that job.

Gary Mohr, who heads Ohio’s Department of Rehabilitation and Correction, said a felony conviction can have lifelong consequences, no matter whether the punishment is imprisonment or probation.

“Even probation or a six-month sentence is really a life sentence because it affects jobs, it affects housing, it affects everything in their lives,” Mohr said.

Several states have moved in recent years to ease the path for convicted felons, including restoring voting rights and prohibiting employers from asking job applicants if they have a criminal record.

Even some red-state conservatives support moves to erase the stigma and help people with felony convictions rejoin their communities.

Marc Levin, vice president of criminal justice policy at the conservative Texas Public Policy Foundation, said his group supported legislation in Texas and elsewhere to ease the way for felons to return to the community.

He cited a Texas bill that would have allowed some felons to seal their criminal records, though the final law that took effect in September only extended to misdemeanors. A 2015 Texas law provided legal immunity to landlords who rent to felons, and a 2009 law made it easier for felons to get occupational licenses.

In 2010, Texas was tied with Louisiana for the fourth-highest percentage of population with a felony conviction, at about 10.5 percent. That was triple Texas’s 1980 rate.

The findings may help put probation reform on the front burner in some states.

In Georgia, a February 2017 report by a state commission called for shorter probation sentences and lighter caseloads for probation officers. (The Pew Charitable Trusts, which also funds Stateline, assisted with the paper.) Almost 3 percent of Georgia’s adult population was on felony probation as of 2015 — far more than any other state and a 12 percent increase from 2010, according to the latest federal figures from the Bureau of Justice Statistics.

Georgia already has taken action to reduce felony convictions. For example, as part of sentencing and classification changes enacted in 2012, the state raised its felony theft threshold from $500 to $1,500.

Felony thresholds vary widely from state to state, from $200 in Florida to $2,500 in Texas. In recent years, many states have raised them to reflect inflation and reduce felony convictions.

When crime rates rose in the 1980s and early 1990s, local and state leaders hired more police and they made more arrests, including felony arrests, Phelps said.

In addition, many states elevated nonviolent crimes like drug possession to felony status, and many district attorneys adopted a get-tough strategy, seeking felony charges whenever possible. Police focused drug enforcement on high-crime neighborhoods, which were often predominantly African-American, Phelps said. As a result, felony convictions rose much faster among blacks than among whites.

In 2010, about 23 percent of the black population had a felony conviction. The number of African-American felons increased more than fivefold between 1980 and 2010, while the number increased threefold for other felons. The University of Georgia study did not calculate separate rates for Hispanics or other minority groups.

In left-leaning states such as Massachusetts, Minnesota and Oregon, one contributor to the growing share of the population with a felony conviction was an increased awareness of new crimes like domestic violence, sexual abuse and animal abuse, said Josh Marquis, a district attorney in Oregon and a 20-year board member of the National District Attorneys Association.

When crime is a major concern in a community, elected district attorneys are especially sensitive to public pressure to file more felony charges, Marquis said.

“We are not rewarded for the number of felonies filed,” Marquis said. “But we do face election and accountability to our neighbors who are also our bosses.”