UPDATE: Missouri Gov. Jay Nixon has declared a state of emergency in Ferguson, Missouri and is imposing a curfew between midnight and 5 a.m. to respond to continued unrest in the St. Louis suburb. 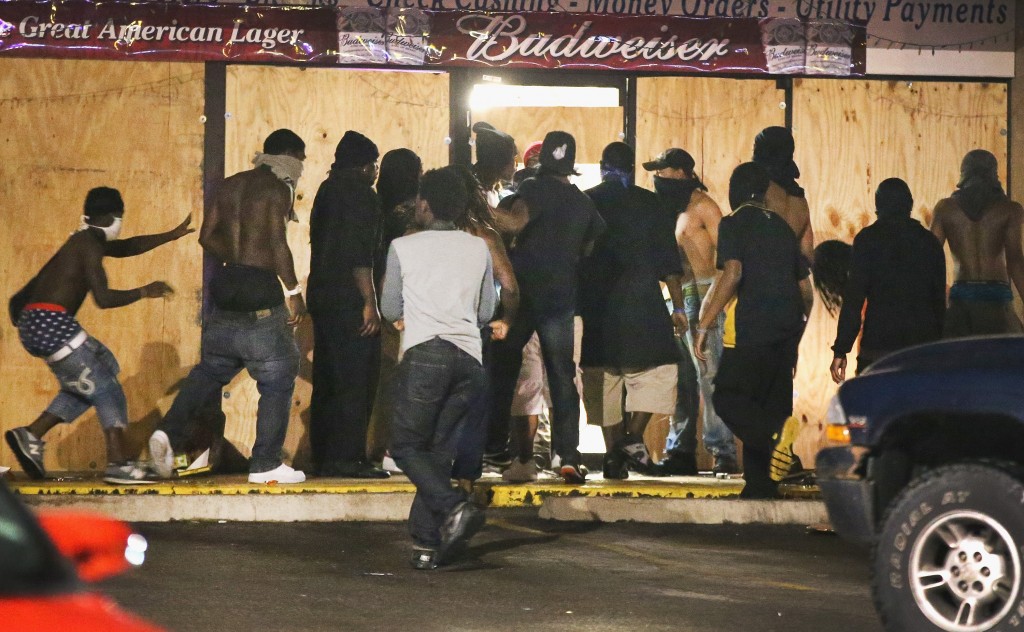 Protests in Ferguson, Missouri escalated on Friday after police identified the officer who shot 18-year-old Michael Brown and released more details on the circumstances of the shooting. Credit: Scott Olson/Getty Images News

On Friday night, protestors returned to the streets of Ferguson. Hundreds clashed with police after the officer who shot unarmed 18-year-old Michael Brown last week was identified, and details about Brown’s alleged robbery of a convenience store were released.

The situation in Ferguson had calmed on Thursday after four days of protests, when Missouri Governor Jay Nixon gave the Missouri Highway Patrol control over area security.

But tensions in Ferguson began to rise once again after new reports and footage were released by police. Ferguson’s police chief, Thomas Jackson, announced on Friday that officer Darren Wilson, who had served the St. Louis suburb’s department for four years, was responsible for shooting Brown and has been placed on paid administrative leave.

Police also released surveillance videotapes and documents that allege Brown stole a box of cigars from a convenience store and pushed a man behind the counter shortly before his death.

Authorities said officer Wilson was unaware that Brown was a robbery suspect and that he had stopped Brown and a friend on the street “because they were walking down the street blocking traffic.”

Police reports revealing details about Brown the night he was killed angered family members, as well as members of the community who believe Brown’s actions did not justify his death. Two hundred protestors crowded the streets and a large group looted Ferguson Market & Liquor, the convenience store that Brown allegedly robbed.

At least one other store was looted, and some protestors began blocking stores’ entrances and windows to limit robberies.

Most of the demonstrations took place on West Florissant Avenue, where police set up a one-mile barricade. Protestors also threw rocks and other projectiles at police, injuring one officer. At first, police released a small amount of tear gas onto the protestors, but eventually police moved away from the protests, according to Missouri State Highway Patrol Captain Ron Johnson.

“We had to evaluate the security of the officers there and also the rioters,” Johnson told the Associated Press. “We just felt it was better to move back.” Johnson said last night’s protests displayed an escalation of intensity and violence and called protestors’ actions “riot-type behavior.”