WASHINGTON — Melania Trump returned to the White House on Saturday from a weeklong hospitalization after kidney treatment, a lengthy stay that raised questions about whether the first lady’s condition may have been more complicated than initially revealed.

“The First Lady returned home to the White House this morning,” Grisham said in a statement emailed Saturday morning. “She is resting comfortably and remains in high spirits. Our office has received thousands of calls and emails wishing Mrs. Trump well, and we thank everyone who has taken the time to reach out.”

READ NEXT: Melania Trump in hospital for treatment of kidney condition

Mrs. Trump had been at Walter Reed National Military Medical Center near Washington since Monday, when she quietly underwent an embolization procedure to treat an unspecified kidney condition the White House described as benign. Word of the hospitalization came as a surprise because there was no indication in numerous public appearances in recent weeks that Mrs. Trump had been ailing.

First ladies are under no obligation to make their medical histories public. A week before undergoing the procedure, a beaming Mrs. Trump presided over a splashy announcement ceremony in the White House Rose Garden to introduce her “Be Best” public awareness campaign to help teach kindness to children. 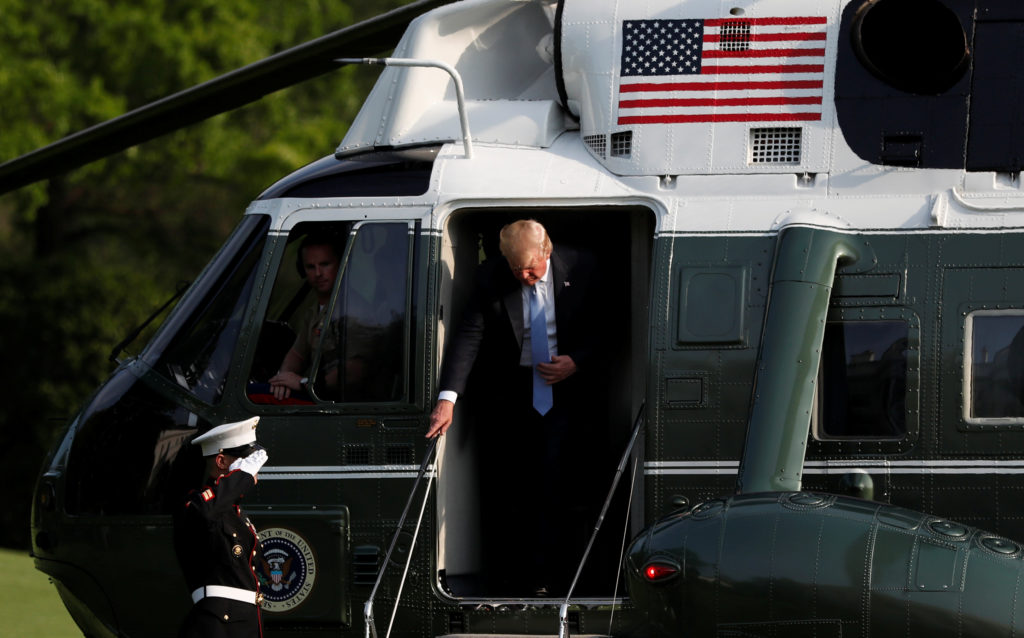 Grisham said Monday that the procedure was “successful,” there were no complications and that Mrs. Trump would probably remain hospitalized for “the duration of the week.”

The president then tweeted Tuesday that his wife would be released in “2 or 3” days, but Thursday and Friday passed without word from the White House on her whereabouts. He had visited her during the first three days of her hospitalization. But he did not make the trip Thursday or Friday, leading some to wonder whether the first lady had been released.

Our great First Lady is doing really well. Will be leaving hospital in 2 or 3 days. Thank you for so much love and support!

The first lady, 48, said Wednesday on Twitter that she was “feeling great” and looking forward to going home, but gave no indication of when that might happen. On Friday, she tweeted about the deadly school shooting at a Houston-area high school but did not update her followers on her medical situation.

A sincere thank you to Walter Reed Medical Unit @WRBethesda & to all who have send good wishes & prayers! I am feeling great & look forward to getting back home @WhiteHouse soon.

Urologists with no personal knowledge of Mrs. Trump’s condition said the most likely explanation for the procedure is a kind of noncancerous kidney tumor called an angiomyolipoma. They’re not common but tend to occur in middle-aged women and can cause problematic bleeding if they become large enough, said Dr. Keith Kowalczyk of MedStar Georgetown University Hospital.

Doctors often treat the condition by cutting off the blood supply so the growth shrinks, added Dr. Lambros Stamatakis of MedStar Washington Hospital Center. Doctors do that with an embolization, meaning a catheter is snaked into the blood vessels of the kidney to find the right one and block it.

Most of the time, these tumors are found when people undergo medical scans for another reason, but sometimes people have pain or other symptoms, Kowalczyk said. Many times, embolization patients go home the same day or the next.

Grisham on Saturday characterized speculation about the first lady as “uninformed.”

“Mrs. Trump has a medical team that is comfortable with her care, which is all that matters,” she said. “Her recovery and privacy are paramount and I will have no further comment beyond this.”

Left: FILE PHOTO: U.S. first lady Melania Trump hosts a roundtable discussion with tech leaders on the effects of the Internet on children, at the White House in Washington, U.S. March 20, 2018. Photo By Jonathan Ernst/Reuters