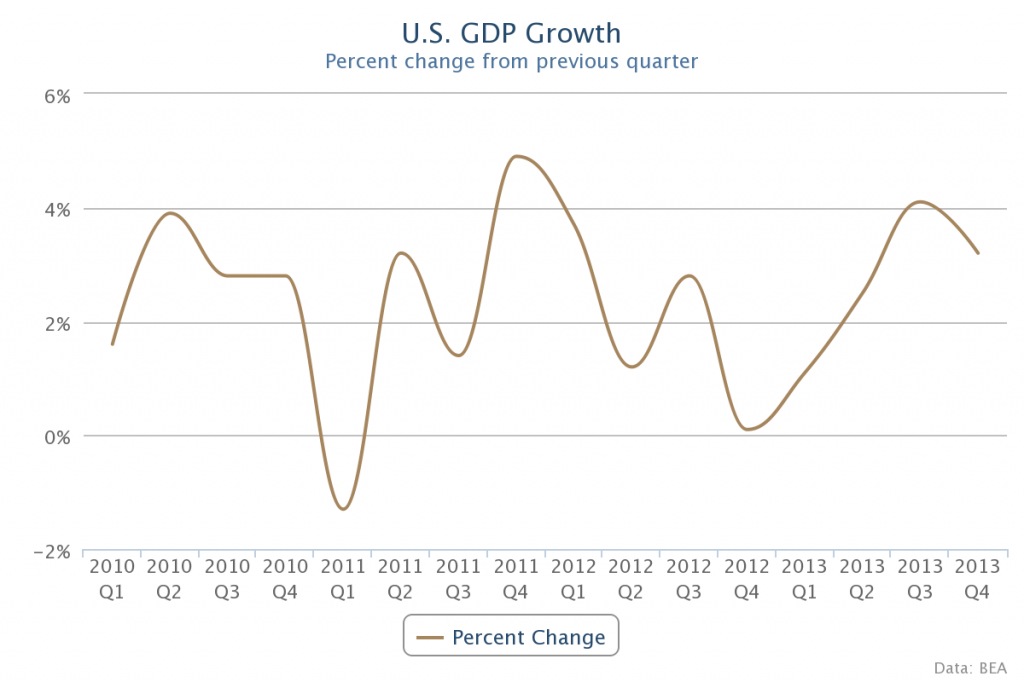 Some of the new financial-health numbers out from the Bureau of Economic Analysis Friday morning are a bit of a yawn. American’s disposable income decreased by $3.8 billion, but while that may sound like quite a bit that amount only accounts for less than 0.1 percent of all disposable income. Meanwhile, the civilian workforce became ever so slightly more expensive for employers during the last quarter of 2013, according the Bureau of Labor Statistics:

Yet this news comes on the heels of the highest consumer spending in three years, and an uptick in personal consumption. Gross domestic product — all the goods and services produced within the United States — increased at a 3.2 percent annual rate during the fourth quarter of fiscal year 2013, according to the Bureau of Economic Analysis. The quarter, which spanned October through December, marks one of the strongest six-month periods of growth in 10 years.

The GDP uptick is being largely attributed to robust spending by consumers and businesses alike. Particularly, a 3.3 percent rise in consumer spending helped bolster growth in the last three months of 2013. This increase is especially important, as consumer spending accounts for roughly 70 percent of U.S. economic growth.

“The economy is in a much better place today,” Moody’s Analytics chief economist Mark Zandi told USA Today. “Most importantly, the collective psyche is much stronger today than at any time since before the Great Recession.”

But Thursday’s report also pointed out that overall, the economy only expanded by 1.9 percent in 2013, compared to 2.8 percent in 2012. Stifled growth may have been due to higher taxes and lower federal spending.

Despite the weaker rate of the growth, 2013 proved that the economy is becoming increasingly resilient. The partial government shutdown and the near-breach of the debt ceiling, among other things, weren’t enough to drastically affect spending. In fact, the government says that shutdown may have only decreased fourth-quarter growth by about 0.3 percent.

Looking to 2014, the economy may see growth in a number of areas, including construction and auto sales and in the jobs sector. But challenges also lie ahead, particularly in light of the Federal Reserve’s announcement that it will continue to pare back its bond-buying program.