Fla. sheriff says only 1 deputy was on scene during shooting

PARKLAND, Fla. — The Florida sheriff whose department responded to this month’s high school massacre defended his leadership Sunday while insisting that only one of his deputies was on the scene as the gunman killed 14 students and three staff members.

Broward County Sheriff Scott Israel told CNN that investigators are looking into claims that three other deputies were on the scene but failed to enter the school when the chance to save lives still existed. To date, the investigation pointed to only one deputy being on campus while the killer was present, he said.

Israel also labeled as “absolutely untrue” reports that the deputies waited outside even though children were inside the building needing urgent medical treatment.

Israel and the sheriff’s office have come under withering scrutiny after last week’s revelation that deputy Scot Peterson did not go in to confront the suspected shooter, 19-year-old Nikolas Cruz, during the Valentine’s Day attack. It is also facing backlash for apparently mishandling some of the 18 tipster calls related to the suspected shooter. The tips were among a series of what authorities now describe as the clearest missed warning signs that Cruz, who had a history of disturbing behavior, posed a serious threat.

Florida Gov. Rick Scott’s office said Sunday that he asked the Florida Department of Law Enforcement Commissioner Rick Swearingen to investigate the law enforcement response to the shooting. The agency confirmed it would start the investigation immediately.

State Rep. Bill Hager, a Republican lawmaker from Boca Raton, is calling on Scott to remove Israel from office because of the missed red flags.

Israel vowed not to resign, saying he has shown “amazing leadership.” He said Hager’s letter “was full of misinformation” and “shameful, politically motivated.”

House Speaker Richard Corcoran stepped up the pressure Sunday, calling on Scott to suspend the sheriff.

“In the years leading up to this unspeakable tragedy, Sheriff Israel, his deputies, and staff ignored repeated warning signs about the violent, erratic, threatening, and antisocial behavior of Nikolas Jacob Cruz,” Corcoran said in a letter signed by dozens of lawmakers. 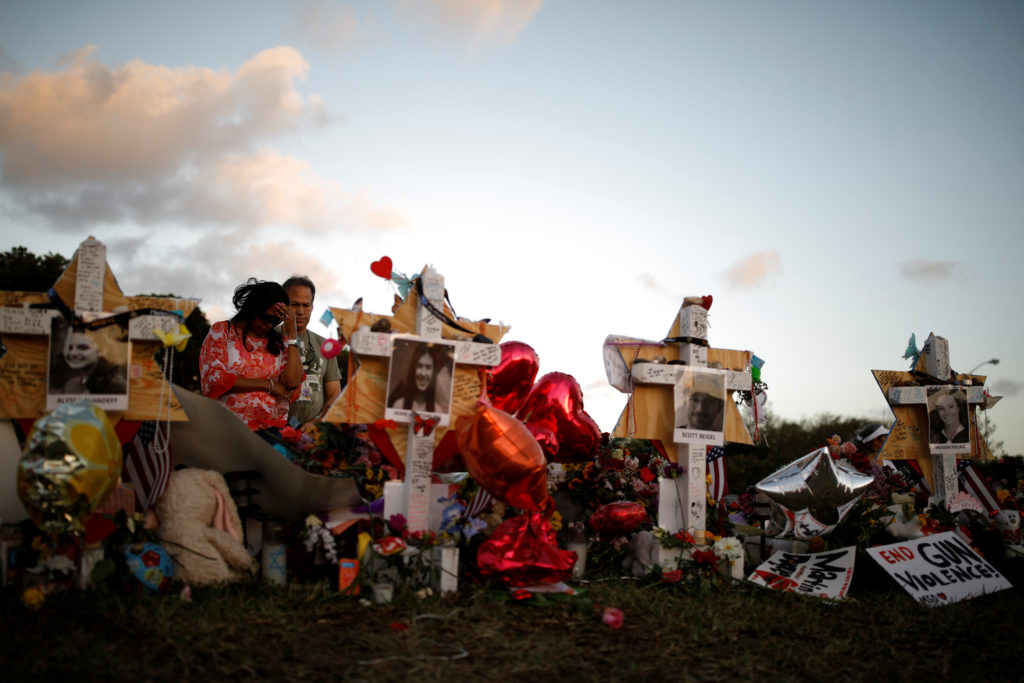 People grieve in front of Stars of David placed in front of the fence of the Marjory Stoneman Douglas High School to commemorate the victims of the mass shooting, in Parkland, Florida, U.S., February 21, 2018. Photo Carlos Garcia Rawlins/Reuters

Israel insisted that lapses were being investigated. He told CNN that a deputy who responded to a Nov. 30 call referring to Cruz as a “school shooter in the making” was being investigated by internal affairs for not filing a report. The sheriff said the employee was placed on restrictive duty.

“There needed to be report. And that’s what we are looking into— that a report needed to be completed, it needed to be forwarded to either Homeland Security or a violent crimes unit,” Israel said.

NRA spokeswoman Dana Loesch told ABC’s “This Week with George Stephanopoulos” that critics shouldn’t blame her organization, gun owners or semiautomatic weapons for the shooting, but Cruz for his own actions and the Broward Sheriff’s Office and the FBI for failing to stop him despite warnings that he was a potential school shooter.

“Can we actually look at what really could have prevented this?” Loesch told Stephanopoulos. “That firearm did not walk itself into the school. …The Broward County Sheriff’s Office allowed that firearm to go into that school.”

The FBI has acknowledged that it failed to investigate the tip about Cruz that the agency received on Jan. 5.

David Hogg, a Stoneman Douglas senior who has become a leader to the student movement, told Stephanopoulos that Loesch’s comments are “disgusting.” He said Loesch’s goal is to “distract” the American public and to benefit the gun manufacturers.

Stoneman Douglas students have been pushing for tougher gun laws. Most want AR-15s banned and the age for buying rifles in Florida raised to 21, as it is for handguns. Many want all semiautomatic rifles banned. Uniformly, they want stronger background checks so people like the 19-year-old shooter, who was known to be mentally unstable and violent, cannot buy guns.

“They act like they don’t own these politicians. They still do. It is a Republican-controlled House, Senate and executive branch. They could get this done. They have gotten gun legislation passed before in favor of gun manufacturers,” he said.

READ NEXT: Congress has ideas on gun violence, but no consensus

The Associated Press obtained a transcript of the phone call, which spanned more than 13 minutes. During the call, the woman described a teenager prone to anger with the “mental capacity of a 12 to 14 year old” that deteriorated after his mother died last year. She pointed the FBI to several Instagram accounts where Cruz had posted photos of sliced-up animals and rifles and ammunition he apparently purchased with money from his mother’s life insurance policy.

“It’s alarming to see these pictures and know what he is capable of doing and what could happen,” the caller said. “He’s thrown out of all these schools because he would pick up a chair and just throw it at somebody, a teacher or a student, because he didn’t like the way they were talking to him.”

Later Sunday, Stoneman Douglas administrators, teachers, parents and students are scheduled to meet at the school to discuss its scheduled reopening. Students return to class on Wednesday.

Kailey Brown, a 15-year-old freshman, said at a rally last week that she will not be scared when she returns. She was in the building where the shooting happened.

“I am going to come back strong with my friends and show that we love each other so much and we are going to get through this,” she said.