The discovery occurred earlier this month in the Florida Keys, where the U.S. Department of Agriculture detected the New World screwworm, a parasite that lives inside open wounds, in a deer. About 30 deer have been found dead or been euthanized in the last two weeks due to screwworm infections. As a result, the county declared an agricultural state of emergency.

“The screwworm is a potentially devastating animal disease that sends shivers down every ranchers spine,” Florida Commissioner of Agriculture Adam Putnam said. “It’s been more than five decades since the screwworm infested Florida, and I’ve grown up hearing the horror stories from the last occurrence.”

New World screwworms are the maggots of blowflies that live inside livestock and people. Warm blooded animals, including humans and their pets, infested with screwworm usually show signs of discomfort and itching. If the infection affects the mouth or lungs, it can be incapacitating. 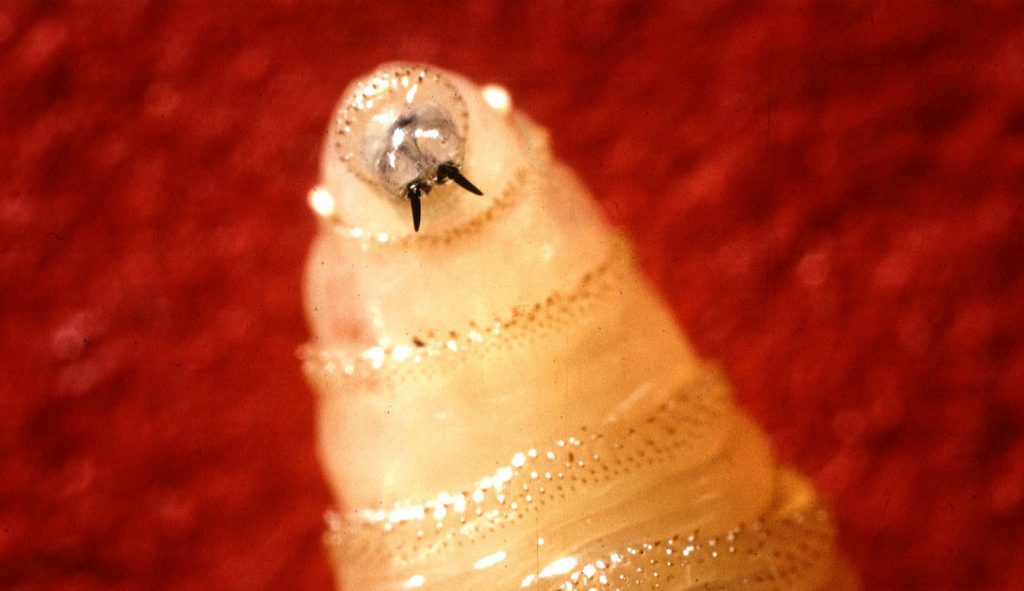 Tusklike mandibles protruding from the screwworm larva’s mouth rasp the flesh of living warm-blooded animals. A wound caused by screwworms may contain hundreds of such maggots. Photo by U.S. Department of Agriculture/via Flickr

No human cases have been confirmed, and the source of Florida’s screwworm outbreak is unknown. All known affected animals have been found on the islands of No Name Key and Big Pine Key. Agriculture officials say if the screwworm is not eradicated quickly, it could infest other parts of the nation.

Health officials urge visitors to the Keys to have their pets checked as a preventative measure. The Florida Department of Agriculture also set up an Animal Health Check Zone to isolate animals entering and leaving the Keys.

“Owners of animals seeking permission to allow their animals to enter or leave the quarantine area must present the animals for inspection at the Department’s Interdiction Station,” Florida State Veterinarian Michael Short said in a statement.

The state of emergency will expire on December 26, unless wildlife officials choose to extend it.

Left: A screwworm is the maggot of Cochliomyia blowflies. Here, a sterile male screwworm fly is marked with a numbered tag to study fly dispersal, behavior, and longevity. Photo by Peggy Greb/U.S. Department of Agriculture