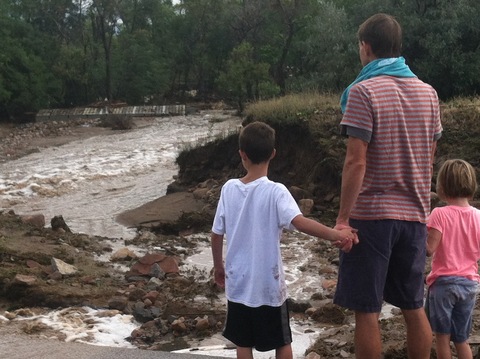 LYONS, Colo. (AP) — The cars that normally clog Main Street in Lyons on the way to Rocky Mountain National Park have been replaced by military supply trucks. Shop owners in Estes Park hurriedly cleared their wares in fear that the Big Thompson River will rise again. A plywood sign encouraged residents mucking out their homes to “Hang in there.”

Days of rain and floods have transformed the outdoorsy mountain communities in Colorado’s Rocky Mountain foothills affectionately known “The Gore-Tex Vortex” from a paradise into a disaster area with little in the way of supplies or services — and more rain falling Sunday. The string of communities from Boulder to Estes Park, the gateway to Rocky Mountain National Park, is a base for backpackers and nature lovers where blue-collar and yuppie sensibilities exist side by side. Now, roadways have crumbled, scenic bridges are destroyed, the site of the bluegrass festival is washed out and most shops are closed.
Chris Rodes, one of Lyons’ newest residents, said the change is so drastic that he is considering moving away just two weeks after settling there.

Estes Park town administrator Frank Lancaster said it could be a month or more before things get back to some semblance of normal, and he advised visitors who would normally flock there during the golden September days to stay away.

The residents who remained or began trickling back — if they were allowed to do so — were left to watch out for one another. Restaurateurs and grocers in Lyons were distributing food to their neighbors as others arrived in groups carrying supplies.

Scott Martin, 25, drove the half-hour from Boulder Saturday to deliver drinking water and gasoline to a friend’s parents. He fled Lyons amid a torrential downpour on Wednesday night after the mountain stream that cuts through town gushed into his basement.

Martin grew up tubing down the river and hiking the mountains, and like many residents, he still jumps in the water after work. Looking into the cottonwood and aspen trees at the outskirts of town, he wondered when he would be able to do those things again.

“Best case, it’s just mud everywhere; in everyone’s yard and all the streets,” he said.

From the mountain communities east to the plains city of Fort Morgan, numerous pockets of individuals remained cut off by the flooding. Sunday’s rain hampered the helicopter searches, and rescuers trekked by ground up dangerous canyon roads to reach some of those homes isolated since Wednesday.

The surging waters have been deadly, with four people confirmed dead and two more missing and presumed dead after their homes were swept away.

Hundreds of people have still not been heard from, but with phone service being restored to some of the areas over the weekend, officials hoped that number would drop as they contacted more stranded people.

In Estes Park, some 20 miles from Lyons, hundreds of homes and cabins were empty. High water still covered several low-lying streets. Where the river had receded, it had left behind up to a foot of mud.

Ironically, the massive Estes Ark — a three-story former toy store designed to look like Noah’s Ark — was high and dry.

“I don’t know if it’s open anymore, but soon it’s going to be our only way out,” joked Carly Blankfein.

Supplies of gas and groceries had been running low until Route 7 was recently reopened. On Sunday, people were lined up at the one gas station where a tanker had arrived.

At the Aspen and Evergreen Gallery along the town’s main street next to the Big Thompson River, owner Tamara Jarolimek was clearing out the shop Sunday in fear that the new wave of rain would cause another surge.

“We only have limited time to get out as much as we can,” she said.

At the town’s historic Stanley Hotel, the inspiration for Stephen King’s “The Shining,” clerk Renee Maher said the hotel was nearly empty. Though it sits on a hill overlooking town, the ground was so saturated that water was seeping in through the foundation, and had caused one suite’s bathtub to pop out “like a keg,” Maher said.

“We’re on food rations, there’s no gas, no toilet paper, no milk,” Maher said. “They got food trucks to Safeway yesterday. Within about an hour, everything was emptied out.”
Despite the mess, some people staying in town turned out for the Stanley’s nightly ghost tours.

“They said they came because they had nothing to do,” Maher said.

In Boulder, often called America’s fittest town, Mayor Matt Appelbaum warned people to stay out of the wide-open spaces that ring the city.

“I know that people are eager to get out there again, but it’s truly unsafe.” he said. “Places that I’ve known and loved for 30 years are gone.”

Boulder remained a refuge for evacuees from the more isolated mountain towns. These refugees filled a church, a YMCA and a high school and crashed on couches around town. Meanwhile, water continued to back up in some parts of town and a water treatment plant remained down Sunday.

But the town was bouncing back. Libraries and recreation centers have reopened. Students are again spilling out of cutesy restaurants on Pearl Street, and classes at the University of Colorado are expected to resume Monday.

Deeper in the mountains, people are wondering whether if the rest of the state will move on without them.

“At least it’s the slow season, so we have some time to rebuild,” Lyons resident Kevin Cray said. “There’s going to be cleanup for a long time. Folks are going to have to come together.”