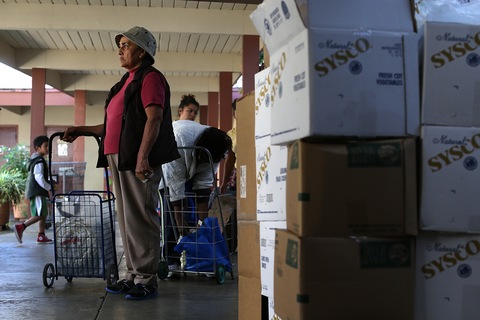 People wait in line to receive free food at a food bank in Richmond, Calif. Food charities are anticipating increased demand for emergency aid after millions of Americans had their food stamp benefits cut. Photo by Justin Sullivan/Getty Images

American food banks that saw demand for emergency meals take off during the recession are working to meet yet another increase for 2014, following cuts to food stamps that took effect Nov. 1, 2013.

The $5 billion cuts in the Supplemental Nutrition Assistance Program will affect 47.7 million people, one out of every seven Americans. A family of four will lose $36 a month in food assistance, according to the Center on Budget and Policy Priorities, dropping from $668 to $632 a month. In New York City, with 63 percent of pantries and kitchens reporting shortages, the cuts will add stress to an already strained system, says Triada Stampas, a spokesperson for Food Bank for New York City. That food bank, the nation’s largest, delivered 72 million meals last year. The organization calculates that across the five boroughs, SNAP cuts will mean that New Yorkers who get assistance will eat a total of 76 million fewer meals acquired with food stamps in the next year.

“We’ve been talking to private donors for months about these cuts,” said Stampas. “But I want to dispel the notion that private charity can make up for the cuts, that’s simply not possible. “

With a 46 percent increase in the number of people seeking meals after the recession hit — from 25 million in 2006 to 37 million 2010 — Feeding America has been struggling to keep up with demand.

“We are very concerned about the impact this cut will have on struggling low-income people and our network food banks,” Aiken wrote in a statement in response to the SNAP cuts. “Unfortunately, our food banks across the nation continue to be stretched thin in their efforts to meet sustained high need in the wake of the recession.”

Not all charities have been able to expand service to catch up to demand. Meals on Wheels anticipates delivering 214 million meals in the 2014 fiscal year, down from the 228 million meals delivered in 2011. As their capacity to serve diminishes due to rising costs and reduced private funding, spokesperson Erika Kelly says the demand is greater than ever, with waiting lists stretching as long as 600 names in cities like Savannah, Ga.

Meals on Wheels, an organization focused on delivering nutritious meals to seniors both at their homes and in senior centers, will see demand for their services rise because 19 percent of the recipients of home-delivered meals are on the SNAP program, according to Kelly.

“That’s why programs like SNAP are critical,” said Kelly “We’re able to get more seniors that can utilize SNAP, which can help us fill in the gap for some of these demands.”

The rise in demand corresponds with growing food insecurity for seniors, which went up 88 percent from 2001 to 2011. In 2011, 8.8 million seniors were faced with the threat of hunger, according to a report by National Foundation to End Senior Hunger.

Jeff Baldwin, a spokesperson for FeedMore, a network of food banks in central Virginia that provides 75,000 meals a day, says his organization needs volunteers to donate time and resources to make up for the loss of meals from the cuts.

“Food banks aren’t set up to be the only provider of food. It’s set up nationally to be an emergency relief program,” said Baldwin.