Editor’s Note: Just how poor are America’s children compared to children around the world?

University of Ottawa professor of economics Miles Corak uses a recent UNICEF report and accompanying background paper on child poverty to draw an important distinction about the way poverty rates are measured. There’s a difference, he says, between who’s poor when only market and private sources of income are considered and who’s poor after counting all taxes, including all federal and state cash and in-kind transfers.

Corak has previously written for Making Sen$e about the Great Gatsby Curve and why America’s children are the silent victims of the Great Recession.

A longer version of this column appears on Corak’s blog. Follow him on Twitter at @MilesCorak. And for more on poverty rates in this country, check out Making Sen$e’s primer, “Who counts as poor in America?”

It is an understatement to say that the welfare reforms of the 1990s were intended to give a little spring to the social safety net.

The intention was much more radical. The reforms involved a major make-over of income support, and turning what was imagined as a net ensnarling many Americans behind a welfare wall, into a springboard that would incentivize work and allow them to ride a wave of prosperity to higher incomes that would lift their children out of poverty.

But this kind of reform is hardly what is needed when times turn bad.

The only virtue of a trampoline when employment falls by more than 8 million, when the unemployment rate more than doubles, and when median incomes drop by over $10,000, is that it catches you on the way down.

The Great Gatsby Curve: Inequality and the End of Upward Mobility

American families needed a safety net during the Great Recession. A recent report on child poverty suggests that is exactly what they got: the rate of child poverty has hardly budged in spite of all the macroeconomic turbulence of the last six years.

The UNICEF report, “Children of the Recession,” is the latest in a series that every two years or so compares the well-being of children across the rich countries, a series that has repeatedly made the claim that child poverty in the U.S. is among the highest, placing American children in the company of, if you find the numbers convincing, Bulgarians and Romanians.

It continues to do so, claiming that one in three American children live in poverty, a slight increase since the recession began, and actually a bit worse than in Romania.

UNICEF defines “poverty” as the degree of inequality in the lower part of the income distribution, more specifically the fraction of children falling below six-tenths of the middle income. This is a prevailing standard in Europe, but an accompanying background paper, that has yet to receive the attention it deserves, offers a helpful perspective by using a definition closer to what is recommended by the U.S. Census Bureau.

America’s Children Are the Silent Victims of the Great Recession

Marianne Bitler, Hilary Hoynes and Elira Kuka, economists at, respectively, UC Irvine, UC Berkeley, and UC Davis, who authored this more detailed assessment for UNICEF, clearly document the failure of the job market to eliminate child poverty. About one-in-six children were poor before the recession when only market and other private sources of income are considered, and this shot up to about one-in-four in 2010.

A child poverty rate of 17 percent in the best of times, to say nothing of one approaching 25 percent during the worst of times, drives home a clear message about the polarization of wage rates, their stagnation and outright declines among the lower skilled, and the limited capacity of families to move up the income ladder, both when jobs are scarce and when they are not. 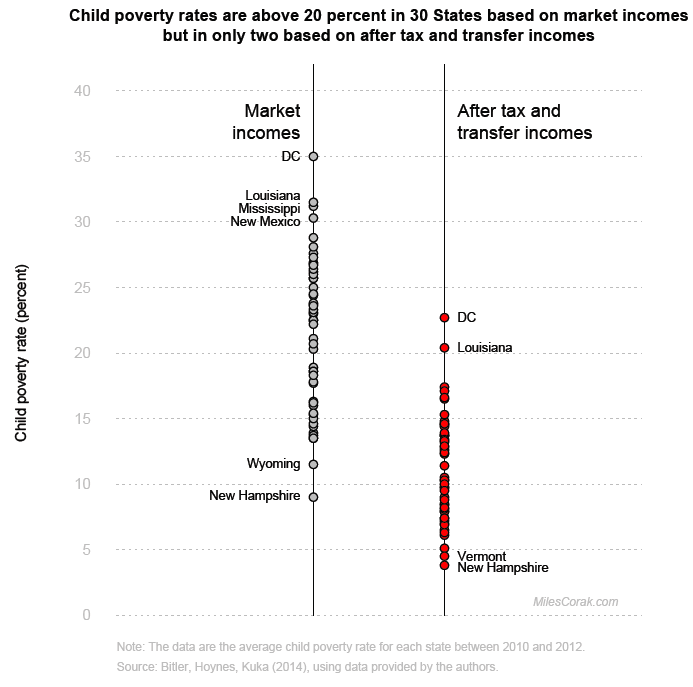 But, when measured after all taxes, and including all federal and state cash and in-kind transfers (with the exception of health insurance transfers), the child poverty rate has not changed at all since 2000, averaging about 12 percent throughout the recession with no major uptick.

The fast food strike: the hard facts behind the Big Mac attack

As the authors explain, Clinton-era welfare reform “led to a decline in cash welfare generosity. At the same time, with the expansion of the EITC [Earned Income Tax Credit], the safety net for low income families with children has been transferred from one providing out-of-work assistance into one supporting in-work assistance.”

The Earned Income Tax Credit may be the country’s biggest anti-poverty program for those with a job, but it doesn’t offer much support for those unable to find work.

In contrast, the very significant increases in spending on the Supplemental Nutrition Assistance Program aided the least advantaged. That spending depended on federal government action, but it also exposed the limited capacity or desire of some states to respond in turn.

Why your baggage handler may be on food stamps 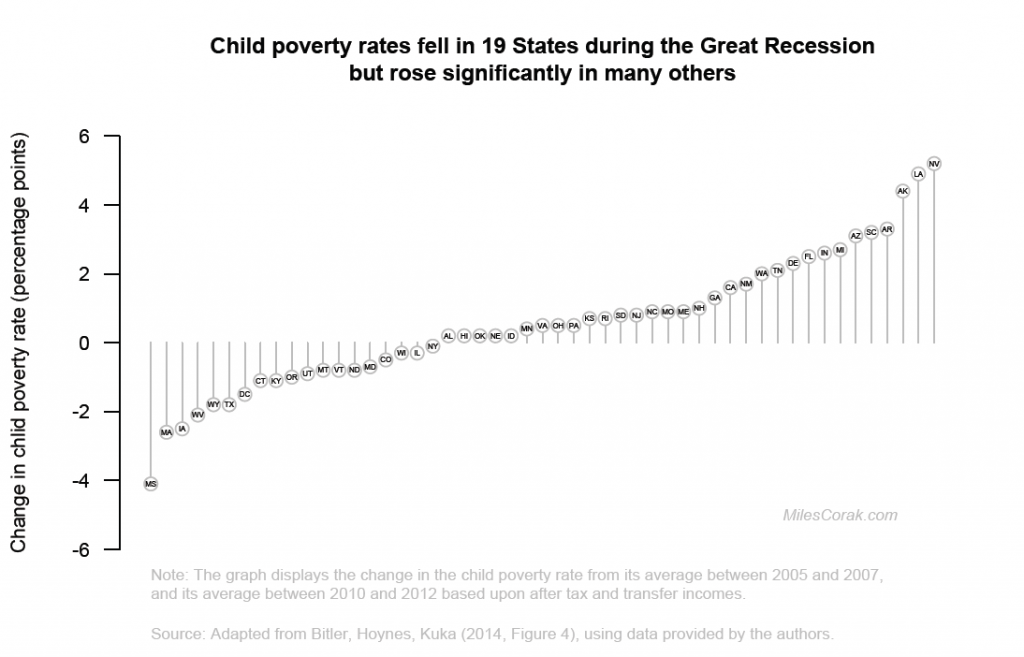 Market income poverty rates that jumped by more than eight percentage points were erased in Hawaii and Idaho, but only partially so in Delaware and North Carolina. And while Nevada saw a 10 percentage point increase in child poverty based on market incomes, that was reduced by about half after government support.

But all of this leaves a good deal unsaid. Income is not the only thing that matters in giving children the support they need to successfully navigate the transitions to adulthood, and the severity and duration of the Great Recession suggest that some kids will certainly be scarred long after the unemployment rate falls to pre-recession levels.

Major reductions in wealth and permanent income from job loss, residential moves as a result of mortgage defaults, and the added stress parents face in having to deal with impeding uncertainty have all taken a toll on the family lives of many kids, whether their household annual income falls above or below the poverty line.

The fact that federal government programs put a floor under family incomes may well be something to be celebrated, but it is not a balm for all of the challenges families and children continue to face, and it is certainly not sustainable in the long run without a robust labor market that benefits the least advantaged in some significant way.

Left: Federal and state cash and in-kind transfers kept the child poverty rate about the same since 2000 and through the Great Recession. Photo by Justin Sullivan/Getty Images.