For farmers, talking about mental health used to be taboo. Now there’s #AgTwitter

Mike Pearson, an Iowa cattle farmer, spends most of his time talking about issues like crop prices and trade policy. He launched AG News Daily, a popular agriculture podcast, in 2016, as a place where the former agriculture and mortgage lender could talk about the business side of farming.

But when it comes to talking about other issues, like depression, which Pearson has struggled with for years, he turns to Twitter — often, #AgTwitter, a Twitter community increasingly popular in recent years among farmers and others connected to the agriculture industry.

A lot of the conversation on #AgTwitter revolves around the more mundane aspects of everyday farm life: people asking for help with a fitting that’s leaking, for example, or crowdsourcing opinions on the best types of track grain carts. But recent downturns in the market, coupled with concerns over President Donald Trump’s trade policies, have prompted more conversations about work-related stress and depression.

Recently, Pearson replied to a farmer who had tweeted about treating depression, sharing the medication he takes himself. To Pearson’s surprise, others chimed in with stories of their own mental health treatment.

“That conversation simply would not have been possible 10 years ago,” Pearson said. “Twitter allows people to reach out in ways that I had never considered before.”

Pearson, who joined Twitter in 2013, first started to see these conversations pick up about two years ago. He said that “from a mental health perspective, the ability to conversate and recognize similarities with other growers” who struggle with depression and anxiety is a major benefit of using the platform.

The concerns voiced on Twitter are born out in studies on mental health in rural communities. While the research isn’t extensive, studies have shown that most rural parts of the country lack access to mental health treatment. A 2018 study by the Department of Health and Human Services reported that 53.34 percent of rural areas were designated as having a shortage of mental health professionals.

Studies have shown that most rural parts of the country lack access to mental health treatment.

Other, related research has focused on suicide rates in rural areas. Reports from the Centers for Disease Control and Prevention have also shown that rural areas had the highest suicide rates of any geographical area of the country from 2001 to 2015, a period when the overall national suicide rate rose steadily. A study published in the Journal of Rural Health last year found that suicide rates among farmers and agriculture workers were more prevalent than homicide rates from 1992 to 2010. The findings also showed that smaller farm operations were particularly at risk; in those with fewer than 11 employees, the odds of suicide were 1.7 higher than homicide.

Mike Rosmann, a psychologist based in Iowa who works with rural communities, said factors such as economic stress and stigmas surrounding treatment put farmers particularly at risk of depression and suicide. “Farmers have little control over some of the most important matters or factors that affect their production, like weather, markets or government policy,” Rosmann said.

But farmers have become better about asking for help, Rosmann said, perhaps because it’s now less taboo to speak about the subject in public forums: “I think it has to do with the media really promoting the availability of support systems and addressing the high rate of suicide among farm people,” he added.

The Department of Agriculture does provide some aid to people in rural communities struggling with mental health. Agriculture Secretary Sonny Perdue said that the department spent $1 billion on health care services in fiscal year 2017, some of which went towards mental health treatment.

The funding was focused on rural places like Ontario, Ohio, where a health care company received a $91.4 million loan to help build a treatment center. The final version of the farm bill House and Senate lawmakers are negotiating this fall will also likely include an increase in funding for mental health services. 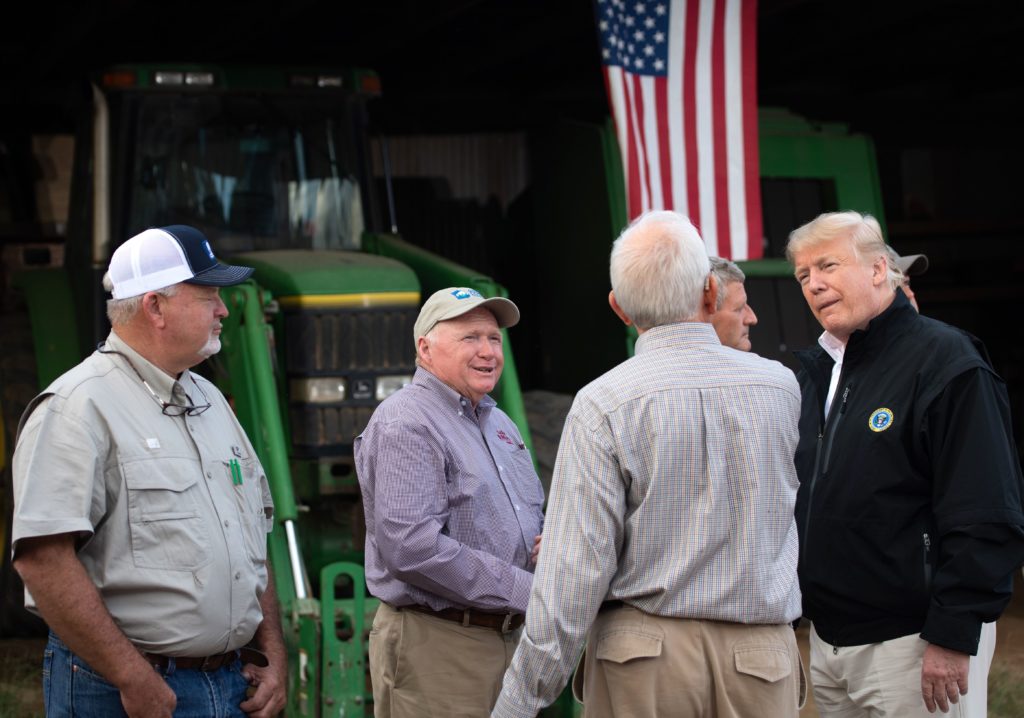 Still, many farmers and agriculture experts said that more help was needed. They pointed to the lack of access in rural areas to all forms of health care, and a general stigma surrounding mental health in particular in farming communities, as key issues.

“In our area, it’s nothing for someone to drive two to three hours for cancer treatment,” said Jami Dellifield, a farmer and consumer sciences educator for the Ohio State University extension in Hardin County, Ohio. “To say that I’m driving that far for a counselor, or for my mental health, has a completely different connotation.”

“You get in that agricultural mindset of, I’m just gonna pull up my bootstraps and go,” Dellifield added. “But sometimes, it’s beyond you.”

It’s no surprise, then, that farmers often take to #AgTwitter to encourage one another to seek help with stress in their day-to-day jobs, or offer tips on ways to cope with depression. Pearson did so recently, telling his Twitter followers to check out a podcast called “The Hilarious World of Depression.”

#agtwitter has had a lot of talk about mental health recently, and I wanted to recommend a podcast that really resonates w/me on depression. It's called "The Hilarious World Of Depression" (seriously) and it's great @THWofD

Uncertainty about the market, spurred by the Trump administration’s recent decisions to place tariffs on major U.S. imports, has compounded many farmers’ anxieties.

Some days, Trump may be boasting about beating China on trade or touting a revamped NAFTA agreement, but some people tweeting with #AgTwitter are casting doubt on the benefits of a trade war.

Cody Swainston, a farmer in Indiana, recently tweeted: “How low do soybean prices have to get for #trumptrain farmers to finally admit that maybe Trump doesn’t understand economics?” Last month TJ Rose, a farmer in Bellefontaine, Ohio, encouraged the president to keep putting pressure on China, but tweeted that he hoped the trade war would subside “before I have to sell these crops.”

The criticism has raised questions about Trump’s popularity among voters from agricultural states that he carried in 2016. On #AgTwitter and in real-life debates in agriculture circles, opinion on the topic is mixed.

Uncertainty about the market, spurred by the Trump administration’s recent decisions to place tariffs on major U.S. imports, has compounded many farmers’ anxieties.

Josh McClure, a grain merchandiser in Chicago, argued that Trump still appeals to most of the farmers who voted for him two years ago. “They are proud of the fact that they can get an unvarnished message from the president without having to go through any gatekeepers,” McClure said in an interview.

Rose, the corn and soybean farmer from Ohio who recently tweeted about trade, said many farmers in his community have already lost $60,000 due to the Trump administration’s tariffs. Nevertheless, Rose said in an interview, “I supported him [in 2016 and] I still support him.”

But others see things somewhat differently. “It’s been a dry year and commodity prices have been awful. The trade thing with NAFTA and China have not helped,” Jodi DeHate, a Michigan farmer and an active voice on #AgTwitter, said, referring to the Trump administration’s renegotiation of the North American Free Trade Agreement. “Everyone’s really worried about what’s going to happen to the local economy.”

Net farm income across the U.S. will reach a projected $65.7 billion this year, a 13 percent drop from last year. A recent study by the Agricultural and Applied Economics Association found that U.S. soybean exports alone could drop by 24 to 34 percent with the tariffs in place.

Given these economic challenges, DeHate said it’s especially important for farmers to take advantage of platforms like Twitter to discuss shared issues. DeHate, who runs a small vegetable farm with her husband, has gone further, attending a meetup in Saskatchewan recently with farmers she met on #AgTwitter. She also recently traveled to Washington, D.C., to meet with lawmakers about the Small Cell Deployment Act, a bill aimed at improving internet connectivity in rural parts of the country.

Farmers like DeHate may still be in the minority, but Pearson, the Ag News Daily host, said that could be changing.

“People in Ag tend to be rather solitary,” Pearson said. “It’s the old Jeffersonian, Yeoman farmer, I’m out here doing my thing — farmers like that.” With Twitter, Pearson said, farmers now have a way to counter those feelings of isolation and battles with mental health issues.

“#AgTwitter doesn’t have the kind of toxic negativity that you see with political Twitter. It’s more of a generalized” conversation, Pearson, added, one that can often give way to important lessons. “Everyday that I’m on there, I learn something fascinating.”

This story has been updated so that all references to Pearson’s podcast read as “AG News Daily.”

Left: Farmers and others in the agriculture industry are increasingly talking about mental health on social media. (File photo by Getty Images)