Changing the Culture of Sexual Assault Against Female Service Members 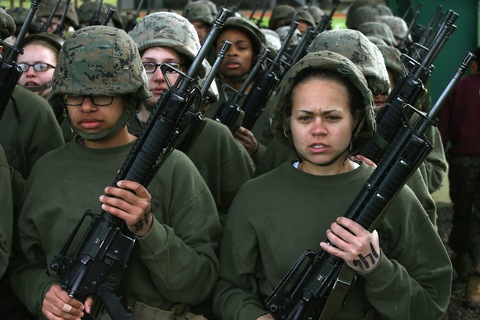 Female Marine recruits stand in formation following hand-to-hand combat training during boot camp at MCRD Parris Island, South Carolina. Even as combat roles begin to open up for female marines, many of them feel marginalized and discriminated against by the military culture. Photo by Scott Olson/Getty Images.

Cecilia Sequeira was a model marine. She got good marks on her evaluations, performed well on her fitness tests and rose in rank.

But as a female marine, she felt categorized as only one of three things.

“They would see you as a bitch, a slut or a dyke,” said Sequeira. “You couldn’t possibly just be a good marine.”

In a workplace where males outnumbered females 50 to one, no matter how good she was at her job, she never quite fit in. And no matter how high she rose in rank — she left the marines in 2005 as a sergeant — not even she could escape sexual harassment.

Sen. Kirsten Gillibrand wants to reverse this trend. The New York Democrat has been gaining bipartisan support for her bill to move the responsibility of prosecuting sex crimes in the military to an independent body, removing it completely from the military chain of command.

The bill moves the authority to prosecute crimes that warrant over a year of punishment, which includes sexual assault crimes, to an independent military court, prosecutors and investigators, leaving more minor crimes, and crimes uniquely military in nature, like going Absent Without Leave, to military leadership.

In mid-June, Gillibrand introduced legislation as an amendment to the Senate Armed Services Committee markup of the National Defense Authorization Act, the bill that funds the Department of Defense for the 2014 fiscal year. But the committee’s chairman Sen. Carl Levin opposed the measure, and it was defeated by the full senate armed service committee. Gillibrand will propose the amendment again when the NDAA is debated on the full senate floor, which will likely be in the next couple of months.

Defense Secretary Chuck Hagel opposes Gillibrand’s bill. But in a speech to West Point’s graduating class in May, Hagel stressed that this is a priority for the Department of Defense.

Sexual assault is not an issue specific to the military, says Rebecca Hannagan, a professor of gender relations and politics at Northern Illinois University, but it happens at a much higher frequency and with more severe consequences. The American Journal of Industry Medicine reports that about one in three servicewoman experience rape, and the Centers for Disease Control reports that about one in five women in America will experience rape.

And unlike civilians, these rape victims are trapped in the hostile environment where not only their success, but also their survival, is dependent on obeying leadership and trusting their fellow service members. “When it happens, it’s not like you can just leave, or get away from the person,” said Hannagan. 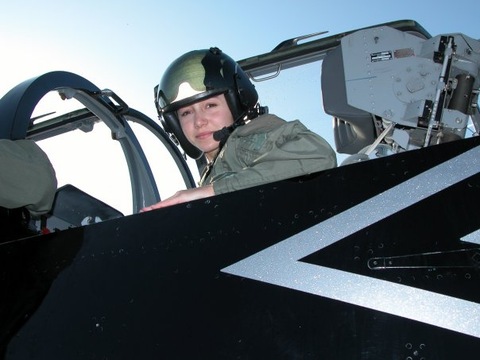 Cecilia Sequeira, a former sergeant in the Marine Corps, hitched a ride with “The Patriots,” a stunt jet team that came to Marine Corps Air Station Miramar to perform an air show. She was an active duty Marine from 2001 to 2005.

Cecilia Sequeira’s experience feeling marginalized and harassed is not unique.

In Hannagan’s research on military group dynamic’s effect on the likelihood of military sexual trauma, she found that many women also felt they were seen as one of these stereotypes.

“Everybody sort of knew that you had to pick which one you had to be or people would pick it for you,” said Hannagan. “It was the experience of many women that no matter how competent they were, they were never going to be one of the guys.”

But beyond policy, military leadership determines the kind of work environment for service members.

A 2003 study on work hazards specific to women in the military concluded that sexually permissive environments, where sexual harassment and pornographic images were pervasive, increased the likelihood of military sexual trauma. The American Journal of Industrial Medicine study concluded that military leadership determines the work environment.

Former Marine Karim Delgado understands how permissive military leadership can lead to a hazardous workplace. He’s seen it first hand while an active duty sergeant in the marines from 2004 to 2008. He described it as an “alpha male” environment where people joked crassly about race, religion, sex and gender.

“We said horrible things, racist things and sexist things. We were poking fun at each other’s weaknesses and insecurities, and people took it in stride,” said Delgado.

Delgado said at one point, he realized the differences between jokes directed at men and women is that former aimed to bring each other together, and the latter aimed to keep people out.

“I never felt threatened (by the jokes) because we were poking fun at the idea of these prejudices. We saw each other first and foremost as family. But when you look to your left and right to see who is sending you to battle, that will never be a woman,” said Delgado.

According to the Department of Defense, women now make up 15 percent of active duty service members. The gender ratio and dynamic varies from service to service and unit to unit, and the opportunities for women are now starting to open up. But not without struggle. Tammy Schultz, a professor at Marine Corps War College, said up until the January decision to allow women to be in combat roles is fully implemented in 2016, the women will hold a minority status in the military, and many of them say they are treated as such.

“They were at a disadvantage in terms of promotion. Your pyramid was much smaller than a guy’s pyramid,” said Schultz. “The most respected part of the military was shut to you by statute.”

Jessica Hinves, an airman first class who was profiled in the documentary “Invisible War’ and on the PBS NewsHour, said that she had no problem with 90 percent of the men. For her, the camaraderie in the Air Force fell into one of two categories. There were the jokes, and there was harassment. Hinves reported that she was raped in January 2009 at Nellis Air Force base.

“Things that were just a joke, I could live with it. It didn’t bother me,” said Hinves. “But when they were directed at me and they made me uncomfortable, I didn’t know what to do. If I would have told, I would have been ostracized. I would have been like a leper in that community.”

Hinves said she kept the discomfort to herself to save her career. And she regrets not speaking up for other women who had endured the same treatment.

Hannagan suggests these sex crimes act as a weapon against servicewomen who threaten classic masculinity. She says that these crimes rate vary in service and in career fields, but they seem to happen most often in military professions where women are still struggling to integrate.

“People that are doing maintenance type work where you have a level of technical expertise, and where it’s traditionally been a male’s job, that’s the place where you’ve seen the MST [Military Sexual Trauma],” said Hannagan.

She qualifies that by saying that military sexual trauma rates are low in fields like infantry and special forces, even though they embody classic masculinity, the job is focused on mission and staying alive.

“This is a problem with the leadership and how they handle sexual harassment and assault,” said Hinves.

She says the leadership must set examples for taking these crimes seriously, and treating servicewomen with respect.

“It’s not sex, it’s not hooking up, it’s not a night of inebriation. This is a play on power and control. And it’s a very demeaning and a wrecking crime,” said Hinves.