Former first lady Barbara Bush, known for her shock of snowy white hair and sharp wit, died Tuesday in Houston, Texas. She was 92.

A statement from the family did not mention a cause of death. A private funeral is planned for Saturday at St. Martin’s Episcopal Church in Houston, where she and her family have been members since the 1950s.

For six decades, the matriarch of one of the country’s most prominent families helped navigate a changing political landscape that spanned the Watergate scandal to the presidency of Donald Trump.

For six decades, the matriarch of one of the country’s most prominent families unfailingly supported her husband, sons, daughters, granddaughters and grandsons as the Bushes navigated a changing political landscape that spanned the Watergate scandal to the presidency of Donald Trump.

Along the way, she called things as she saw them, earning a reputation for a witty sense of humor that would sometimes get her into trouble.

“I tried to behave myself but I’m a little impulsive so occasionally I said things I was sort of sorry I said, but I think I believe them,” Bush said in a PBS interview in 2004.

She was born on June 8, 1925 in New York City to Marvin and Pauline Pierce, the third of four children. Her father was president of the McCall Corporation, which published the women’s magazines Redbook and McCall’s. Her mother, Pauline, was a one-time chairwoman of the Garden Club of America. The family home was in Rye, New York, where Barbara kept busy with swimming, tennis and bike riding.

A Christmas party in 1941 would set her on a new course. That’s when she met George Herbert Walker Bush, who was then a senior at Phillips Academy in Andover, Massachusetts. The two began writing to each other, since Barbara was away at boarding school in Charleston, South Carolina.

George went off to serve as a Navy pilot during World War II, named his bomber plane “Barbara” and kept on writing. They were engaged a year and a half after they met, and Barbara dropped out of Smith College after her freshman year to marry him in January, 1945. From there, the couple moved around, following George’s squadron training. 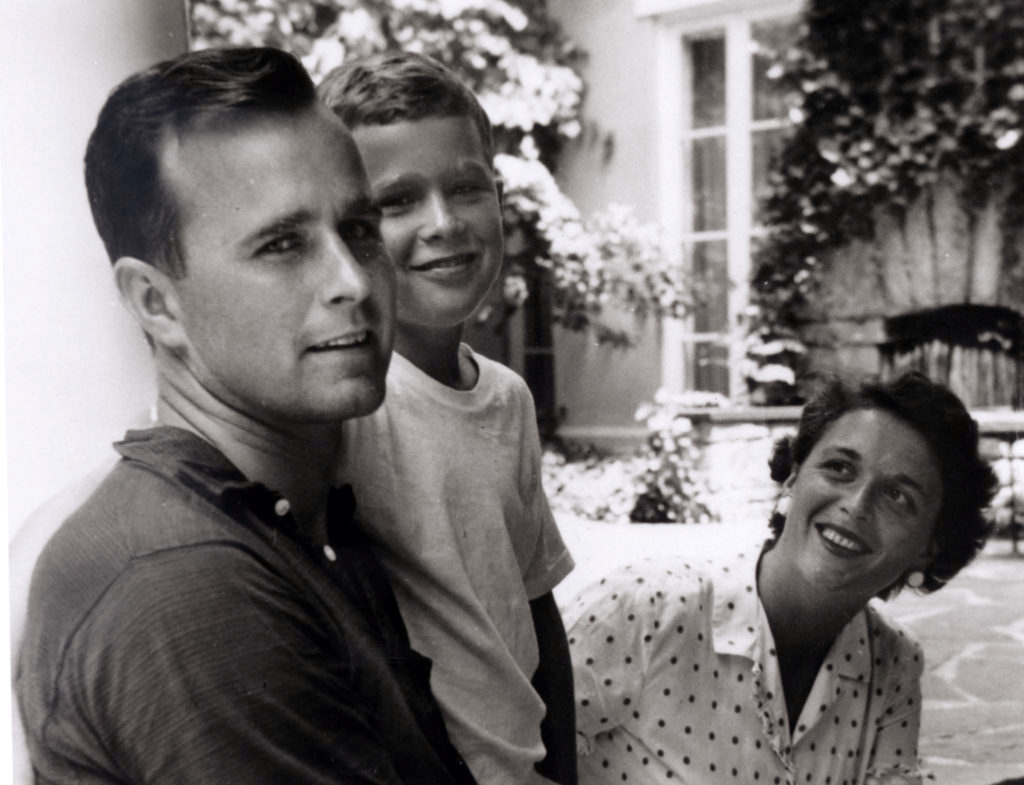 Their first son, the future president George W. Bush, was born in New Haven, Connecticut, in 1946, while the elder George Bush attended Yale University. After graduating, the growing family moved west for opportunities in the oil industry in Texas and California.

Five more children followed: Robin, Jeb, Neil, Marvin and Dorothy. In 1953, their daughter Robin was diagnosed with leukemia at a time when very little was known about the disease. She received what treatment existed at the time at Sloan-Kettering hospital in New York, but died seven months later at the age of 3.

“I hadn’t cried at all when Robin was alive, but after she died, I felt I could cry forever.”

In a 1988 interview with Texas Monthly, Barbara Bush spoke about the time following Robin’s death. “I hadn’t cried at all when Robin was alive, but after she died, I felt I could cry forever,” Bush said. “George had a much harder time when she was sick. He was just killing himself, while I was very strong. That’s the way a good marriage works. Had I cried a lot, he wouldn’t have.” After that, Barbara Bush volunteered her support to cancer research organizations as her way of keeping her daughter’s memory alive.

Soon the family’s life turned to politics. In 1964, George H.W. Bush ran as the Republican candidate for U.S. Senate in Texas. He lost, but two years later was successful in his bid for a seat in the U.S. House of Representatives.

The family headed east and for two years lived in Washington, D.C., followed by a stint in New York, where George Bush served as the U.S. ambassador to the United Nations.

As a reward for his loyalty to the Republican Party, President Gerald Ford in 1974 named George Bush head of the U.S. Liaison Office in Beijing, China. 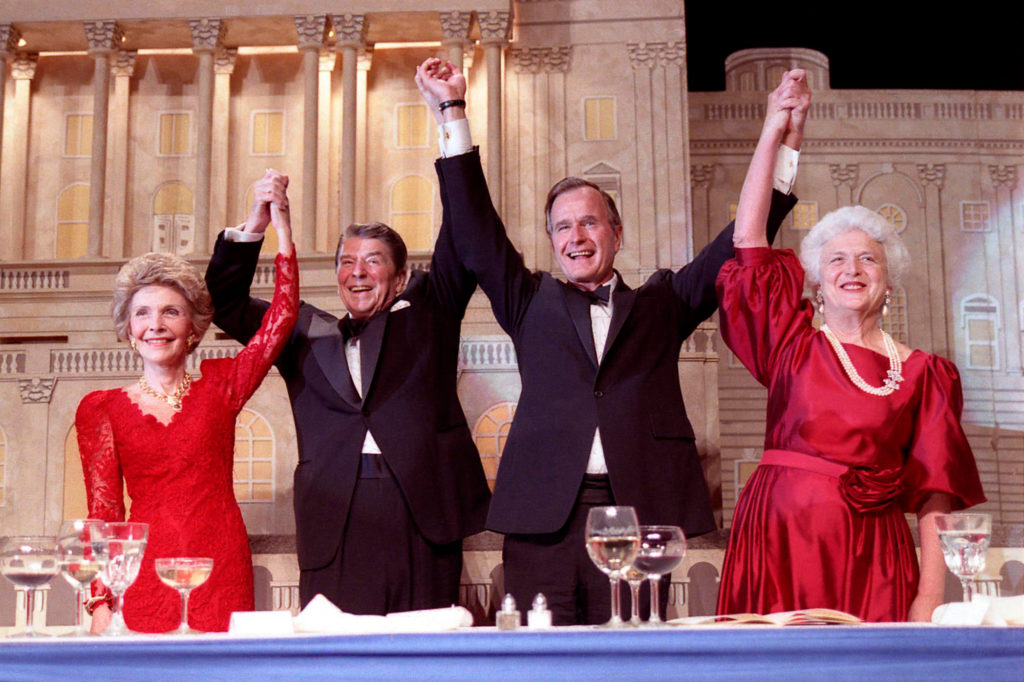 President Ronald Reagan (second from left) and Vice President George H.W. Bush, (second from right) are accompanied by their wives Nancy and Barbara at a dinner in Washington, D.C., on May 11, 1988. Photo courtesy of the George Bush Presidential Library and Museum via Reuters

After the posting, Bush returned to the nation’s capital for a term as the director of the Central Intelligence Agency. He took a first run at the White House in 1980, but lost to the eventual Republican nominee Ronald Reagan. George Bush did, however, join the ticket as Reagan’s running mate. He served as vice president for two terms, from 1981 to 1989, solidifying his place in the highest ranks of the Republican Party and positioning himself for another run at the White House.

“You teach a mother and a child to read and that family will read for 100 years to come.”

During that time, Barbara rarely spoke out on matters of policy or politics, with one notable and much-covered exception. In 1984, she called then-Democratic vice-presidential nominee Geraldine A. Ferraro “that $4-million — I can’t say it, but it rhymes with rich.” She quickly apologized for the gaffe.

It was during her time as second lady that Barbara Bush also began her advocacy work for a number of literacy organizations, both for children and adults. That work would last the rest of her lifetime. She once described it this way: “A man gave me some peonies once and said if you plant them just as we say, dig a deep hole, you fertilize, you spread the roots, put the dirt back on and then they may not bloom the first year but they’ll bloom for the next 100 years. It’s the way I think about literacy. You teach a mother and a child to read and that family will read for 100 years to come.”

Video by the Barbara Bush Foundation for Family Literacy

George H.W. Bush beat his Democratic opponent, Michael Dukakis, in the 1988 presidential election, and was sworn into office as the 41st president of the United States in January of 1989, with Barbara at his side.

As first lady, Bush combined her love of literacy with her love of dogs. She wrote a best-selling children’s book about the family’s English springer spaniel, Millie. Titled “Millie’s Book: As Dictated to Barbara Bush,” the book earned more than $1 million for charity.

Barbara campaigned for — and staunchly defended — her husband during his tough re-election bid in 1992. Bush was praised for his handling of the Gulf War, but heavily criticized by some on the right for failing to keep his promise not to raise taxes. 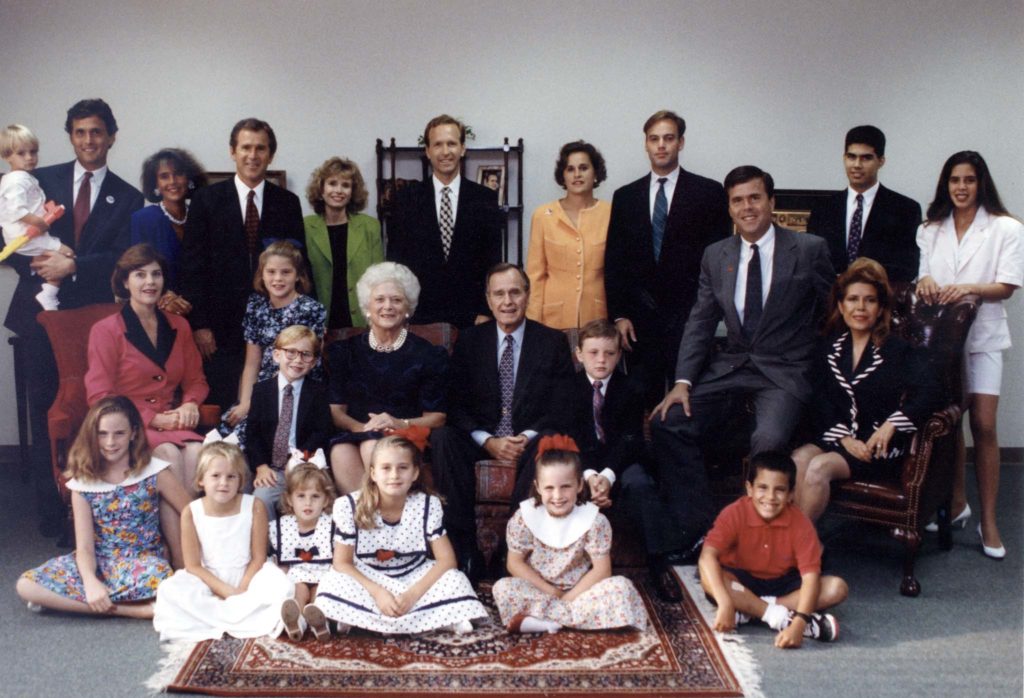 In a PBS NewsHour interview at the Republican National Convention, she said: “What’s the matter with Americans? Don’t Americans know that when you achieve peace it costs money? Peace is costly. We ought to be willing to pay for the fact that we go to bed every single night of our life freer and safer because of George Bush.”

But George H.W. Bush went on to lose to Bill Clinton, who represented a new generation of Democratic leadership and offered a change from the Republican Party’s 12-year reign in the White House. 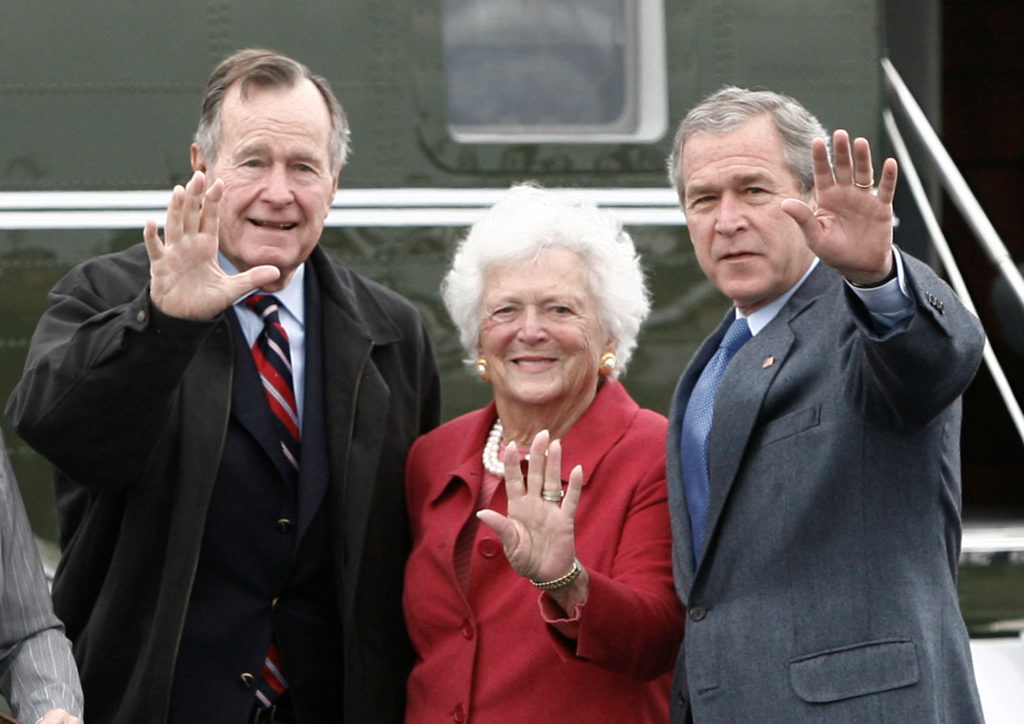 Eight years later, Barbara Bush was back campaigning again, this time for her son, George W. Bush, in his 2000 presidential run. Bush beat Al Gore, Clinton’s vice president, in one of the closest elections in U.S. history.

His election marked the second time in U.S. history that a father-son duo had held the office of president. The other pair was John Adams and John Quincy Adams nearly two centuries earlier. Barbara Bush is one of only two first ladies, along with Abigail Adams, the wife of John Adams, who was also the mother of a president.

George W. Bush’s election further cemented the Bushes as one of the country’s great political families, alongside the Kennedys and Roosevelts.

George W. Bush left office in 2008 with low approval ratings. But by then his father had embraced a new role as an elder statesmen of the party, and both George H.W. Bush and Barbara Bush emerged as popular figures in American political life. 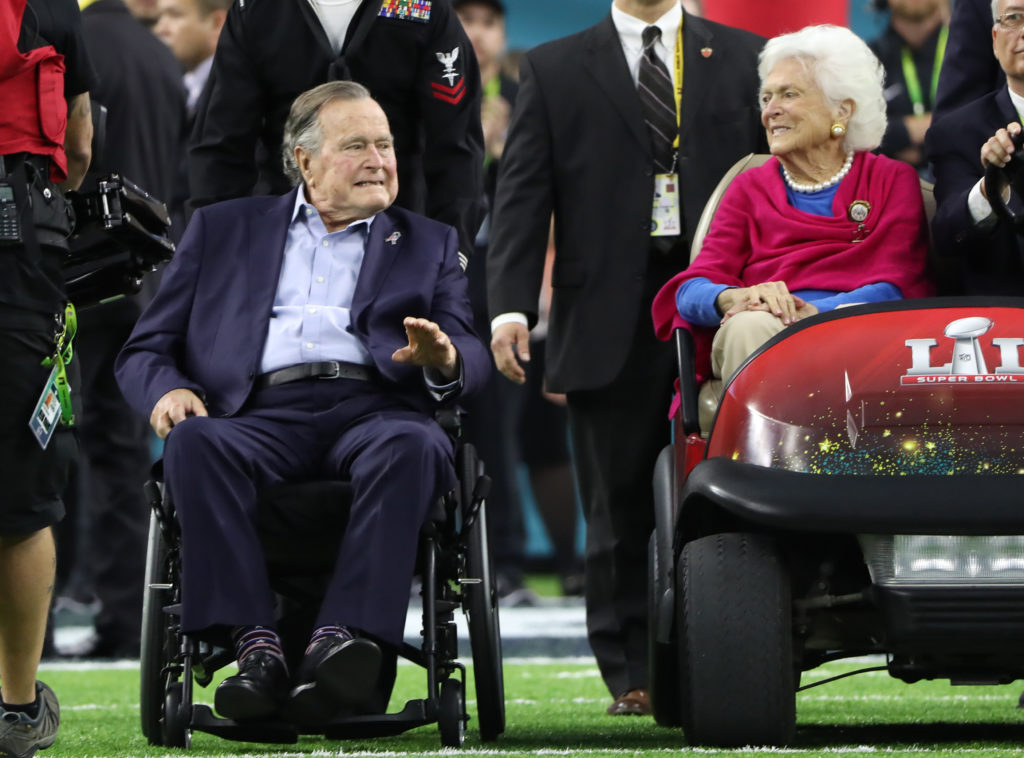 Former U.S. President George H.W. Bush and former first lady Barbara Bush arrive on the field Feb. 5, 2017 to do the coin toss ahead of the start of Super Bowl LI between the New England Patriots and the Atlanta Falcons. REUTERS/Adrees Latif

The elder Bushes were thrust into the national spotlight once again in 2015, when another one of their sons, Jeb Bush, a former Republican governor of Florida, announced he was running for president. After a lifetime in politics, Barbara Bush, then 90, hit the campaign trail again, stumping for Jeb in New Hampshire in what was ultimately a failed bid for the Republican nomination. The party’s ticket was headlined by Donald Trump.

Both Barbara and George H.W. Bush, as well as their son George W. Bush, did not attend the Republican National Convention in 2016, a stunning rejection of the GOP nominee, and a sign that much of the party had changed in the decades since the elder Bush rose to power in post-Watergate Washington.

In what was one of her last public appearances in March, Barbara Bush took the stage with her husband at his presidential library in College Station, Texas, where they spoke with members of the Presidential Leadership Scholars Program. In mid-April, a Bush family spokesman announced Barbara Bush had decided not to receive further medical treatment and would instead return to her Houston home for palliative care.

The former first lady will lie in repose at St. Martin’s Episcopal Church in Houston for members of the public to pay respects. The Saturday service is by invitation only, according to the George Bush Presidential Library Foundation. Current first lady Melania Trump plans to attend.