Frank Deford, who has died at 78, changed the way we see sports

Longtime Sports Illustrated writer and NPR commentator Frank Deford, an esteemed sports journalist known for his colorful commentary, died Monday at his home, his wife told the Washington Post. He was 78.

Fans and colleagues of the Baltimore-born journalist say he transformed the way Americans think about sports, weaving intimate portraits of coaches and athletes and bringing statistics to life with his distinctive style of storytelling.

“He wanted to show a largely non-sports audience that sports were closer to them than they thought,” NPR’s Tom Goldman wrote in a piece about Deford’s retirement earlier this month.

“You’re writing about young, vibrant people; there are wins and losses. In other words, it’s great drama,” Deford told the Atlantic in 2012.

Frank Deford was one of a kind — a legendary storyteller and prolific writer. He loved his work https://t.co/LOzkISkWSo pic.twitter.com/CQbkS6ERFi

After graduating from Princeton University, Deford started his career at Sports Illustrated in 1962, earning the nickname “Frank De-Freud” for the way he was able to so deeply dive into his interviewee’s psyche, he told Goldman earlier this month.

In 1979, he was approached by a sports producer at NPR’s Morning Edition to start a weekly sports radio spot. Deford told Goldman he was “something of a ham.” So while he thought of himself as a writer, he said, “it wasn’t as if you had to drag the words out of my vocal chords” for radio.

In 1981, Deford was “something of a ham” in this Miller Lite commercial with former baseball player Marv Throneberry and Oakland A’s manager Billy Martin

Deford thought he’d last a few months, he recalled in that interview. But from 1980 until the beginning of May 2017, Deford came on the air every Wednesday, filing more than 1,600 commentaries that included Shakespearian takes on the Superbowl and closer looks at controversial issues like academic fraud in collegiate athletics and challenges faced by gay male athletes.

“When Frank came on, being outrageous, it was very much what we wanted in our commentators,” former Morning Edition producer Ketzel Levine told NPR. “He just kind of took it in a whole different direction that no one had really taken it before.”

In 1989, he became editor-in-chief of “The National,” a daily sports newspaper that went out of print 18 months later. Deford continued to contribute to Sports Illustrated, as well as magazines such as Vanity Fair and Newsweek. But his work spanned genres — he was a regular commentator on CNN, and, since 1995, contributed to HBO’s “Real Sports with Bryant Gumbel.”

Very few can honestly wear the "legend" tag. Frank Deford is one. https://t.co/m6uTbdH65H

He appeared several times on PBS NewsHour. In 1998, he described first baseman Mark McGwire as “precious” after the MLB star set a new home-run record. He criticized the Olympics’ lack of diversity, calling the Winter Games “almost all white athletes being watching by almost all white people.” In 2006, he participated in a debate on whether the U.S. would warm to soccer — a sport he famously loathed.

“Someone had to stand up to the yackety-yak soccer cult,” he wrote in his farewell from NPR earlier this month, referring to the heat he’d taken for his treatment of the sport over the years.

“[Deford] wanted to show a largely non-sports audience that sports were closer to them than they thought.”

He was also an author of 18 books. While his fiction sometimes focused on sports, he also wrote stories closer to the heart. He chronicled the life and death of his daughter in “Alex: The Life of a Child,” a memoir that shared her struggle with cystic fibrosis; it was made into a movie starring Craig Nelson and Bonnie Bedelia. After Alex died in 1980, Deford became president of the Cystic Fibrosis Foundation, a position he held until 1999. He remained president emeritus until his death. 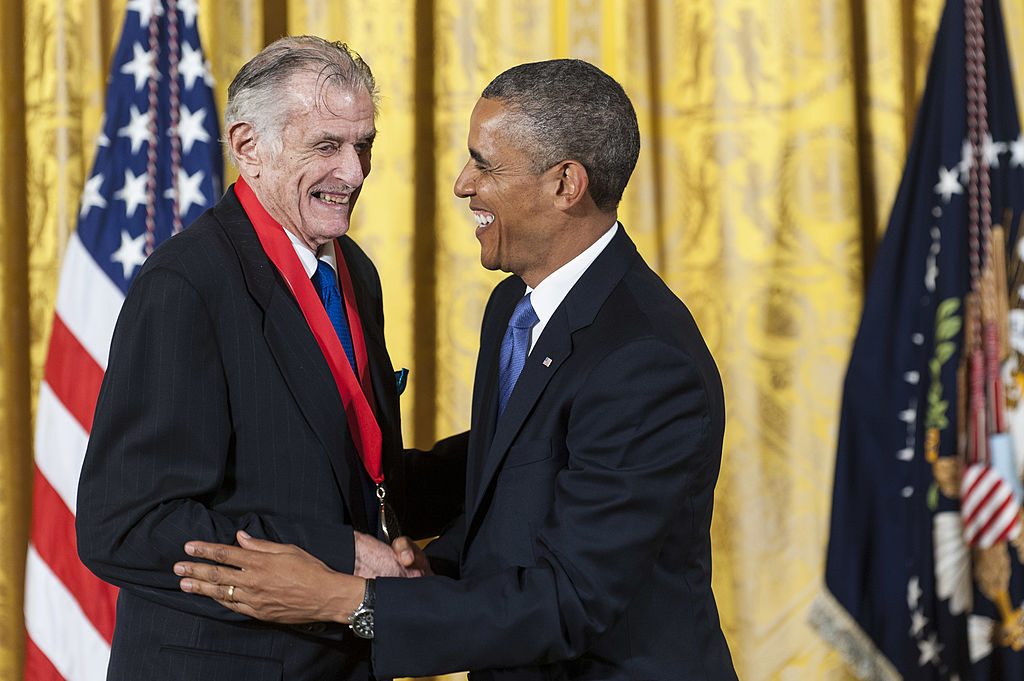 President Barack Obama presents a 2012 National Humanities Medal to writer Frank Deford during a 2013 ceremony in the East Room of the White House in Washington, D.C. Photo by Pete Marovich/Getty Images.

Deford was a six-time winner of the U.S. Sportswriter of the Year award and twice earned the honor of Washington Journalism Review’s magazine writer of the year. In 2013, President Barack Obama gave him the National Humanities Medal; he also earned a spot in the National Association of Sportscasters and Sportswriters Hall of Fame.

In 2013, he became the first sports journalist to receive the W.M. Kiplinger Award for Distinguished Contributions to Journalism — the National Press Foundation’s highest honor.

In a 2008 interview with Deadspin, when ask if he’d felt pressure to adapt to the changing media market, he said “you have to do what the market requires of you … You either keep swimming, or you sink.”

“I have survived so long because I’ve been blessed with talented and gracious colleagues, and with a top brass who let me choose my topics every week and then allowed me to express opinions that were not always popular,” he said in his final piece — an ode to Ringling Brothers and Barnum and Bailey’s final performances — May 5.

“And perhaps just as important, I’ve been blessed with you, with a broad and intelligent audience — even if large portions thereof haven’t necessarily given a hoot about sports … NPR allowed me to treat sports seriously, as another branch on the tree of culture.”

See more memories of Deford in the Twitter moment below.