As more details emerge about Friday’s Connecticut school shooting, thousands of Americans found comfort in the following touching image and quote from the late Fred Rogers: 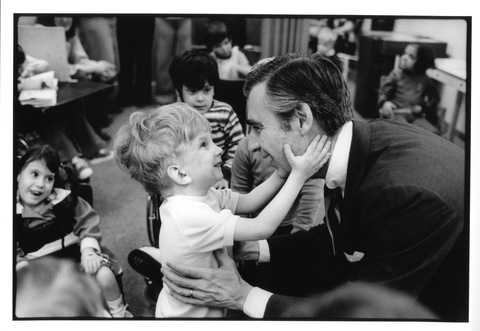 “When I was a boy and I would see scary things in the news, my mother would say to me, ‘Look for the helpers. You will always find people who are helping.’ To this day, especially in times of ‘disaster,’ I remember my mother’s words, and I am always comforted by realizing that there are still so many helpers — so many caring people in this world.”

On Friday, 170 Million for Public Broadcasting posted the image and quote on their Facebook page. Since then, the post has been seen by hundreds of thousands of people and shared more than 90,000 times on Facebook.

The quote was taken from a timely video in which Rogers advises parents on how to help their children during times of tragedy. You can watch that original video and see more photos and videos of Rogers here on the PBS Parents page.

Photographer Jim Judkis captured the photo in 1978 at The Children’s Institute in Pittsburgh, then known as the Memorial Home for Crippled Children. On Tuesday’s NewsHour, Judkis’s daughter Maura Judkis talks about the virality of her father’s photo.