What happens in a mudslide? A geologist answers

ARLINGTON, Wash. — Authorities have confirmed that the landslide on the Stillaguamish River has killed several people and destroyed homes.

EarthFix’s Ashley Ahearn turned to Dave Montgomery to find out what caused the slide. Montgomery is a geologist at the University of Washington.

AHEARN: Dave what happened on the Stillaguamish?

MONTGOMERY: Literally an entire hillside gave way. The hill slope itself was fairly weak glacial material and the river was cutting into the toe at the base of it. If you look at the Google Earth image from before the slide you’ll notice that if you imagined yourself in a canoe going down the river on the right hand bank, you would have been forced against that bank. And it was eating into the toe of what then became the landslide. So you have a situation with the river undermining a relatively unstable slope, and you also have one of the wettest Marches in history.

It’s a recipe for causing a slide. But turns out there was a slide there beforehand as well because on the same Google Earth images you can see the trace of the edge of a landslide scar that predates the current one. So the slope was already unstable and it reactivated in a much more dramatic and violent fashion than it seems to have done in the past. 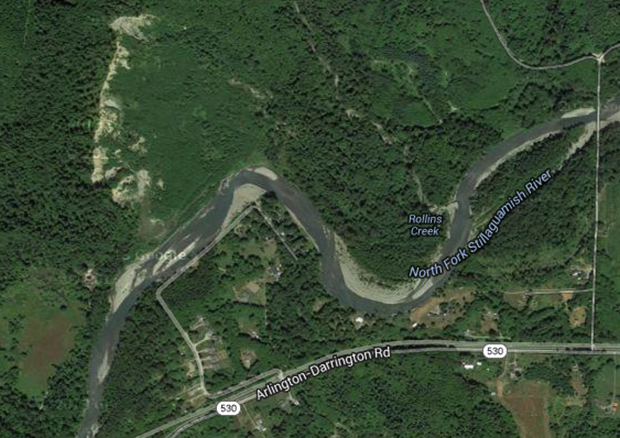 An image from Google Earth, taken before the current slide, shows the scars from a previous slide that took place at the same spot in 2006.

AHEARN: What other causes might be at play here? How about logging?

MONTGOMERY: Well it looks like the slope had been logged sometime in the not too distant past. The old slide — it looks like there’s younger forest growing on top of that bit but there’s still a lot of argument about the way in which forest practices might affect the deep-seated slides. So that question I’m sure will be asked, and I’m sure it’s a pertinent question, but I don’t think the answer’s as obvious as some might think.

AHEARN: Precipitation patterns are changing in this region — we’re getting more rain instead of snow in the wintertime. How do you think that contributes to a slide like the one on the Stillaguamish or the potential for more landslides in the future?

MONTGOMERY: Well, I can’t really say one way or the other how that might have contributed to the one on the Stillaguamish. We’ve had a very wet March and that was definitely a contributing factor. Why we had that wet a March, well that gets into all the problems of climate versus weather. In terms of how changing patterns of rainfall ought to affect land sliding, if we get more intense rainfall in the future we should have more landslides. If we get more soaking rainfall and get more rainfall total, we should have more landslides. The character of the rainfall that we get, whether it’s more high intensity rain or more of the long soak would actually influence the type and style of landslides that we might expect to get but the short answer is, you know, if we get more rainfall we ought to expect to see more landslides and this region already is landslide-prone.

MONTGOMERY: But if the climate changes in a way that we get a lot more rainfall you would expect to see a lot more landslides. It’s the same with hurricanes in the South; if the climate is changing we might expect to see more of them, but can you blame any one of them on climate change? That’s a case that most scientists might not make because it’s the wrong question to ask.

MONTGOMERY: The right question to ask, particularly in terms of this landslide on the Stilly, is to what degree do we want to investigate the hazards that are out there in the world around us and communicate that to everybody in society so we can all make informed decisions about where we live, the risk we may be running, how our infrastructure is a raid on the landscape. And this place is a place that looks like it had slid before, so it was an identifiable hazard. But did the people living downhill and on the other side of the river, were they aware of it? And if not, that’s kind of a societal failing of communication. And so, there’s an information and education component that I think we could actually learn a lesson from this. It’s sadly too late for the people that live there, but even there, the question would be, if you had this risk of maybe someday this hill will come down, how do you weigh that against living in a beautiful spot in the bend of a river?

Dave Montgomery is a geologist at the University of Washington. His latest book is “The Rocks Don’t Lie.”

Left: In this handout from the Washington State Department of Transportation, a mudslide on Saturday buried a mile of State Route 530, demolished 30 homes and killed at least eight people in a rural community near Oso, Wash. Photo by WSDOT