Getting Around Gadhafi: Rethinking Revolution Coverage From Libya 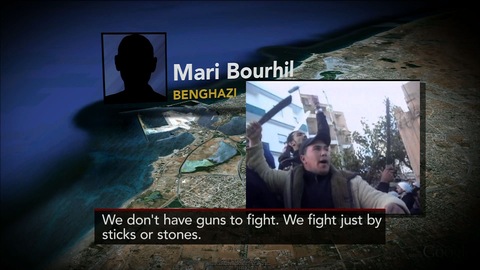 One of our segments on Friday’s PBS NewsHour was not like the other ones, in that it came together in a slightly different manner than what has been standard operating procedure here. While we can count on our partners at ITN to deliver excellent video from the scenes of where their reporters are, we turned to social media in order to gain access to primary sources on the ground in Tripoli, on what could have been one of the darker days of their revolution.

After our chat with Andy Carvin of NPR last week, his Twitter stream was the first stop. From there, we began direct messaging potential sources until eventually some began writing back, despite their sporadic phone service and nearly nonexistent Internet connections.

There were already excellent resources available online from the curation of social media around Libya on the Storyful page to the transcription project happening at Alive In Libya to the interactive twitter monitoring map at the Guardian to the feb17voices project on Audioboo. This group is actively making phone calls to get the sounds and sights of Libya distributed to the world. (They are the same folks who were behind the Jan25voices project on Egypt’s uprising. I personally owe them a debt of thanks for helping us find one of our guests.)

Twitter responses eventually led to all three of the phone calls we used small snippets of in our broadcast piece tonight. We published longer excerpts of the conversations in a blog post we were updating throughout the day. We used Skype to record our conversation with Libya_United instead of tying up the phone that he needed to keep track of the situation around him. His thoughts on the information war at work is worth a listen.

There was as much, if not more that we had to leave on the cutting-room floor. We noticed the mashup Google Map that Twitter user Arasmus had been creating but couldn’t verify any of the source information independently, same with the source video that the folks at Feb17voices had posted to Posterous page which Al Jazeera aired. There was also ample video on this Facebook page but we were lacking context and verification before adding any of it to the broadcast. We used TweetDeck to translate several messages from Arabic in case we could use something as part of a Google Earth graphic we built for the broadcast, but we didn’t end up doing so.

There are a dozen other things we hope to learn about using the new tools as we make our way through a changing landscape for storytellers. The PBS NewsHour is eager to keep experimenting and learning. If you have suggestions, please leave them in the comment section or reach out to us in any other way.