Getting closer to Robert Capa on his centennial 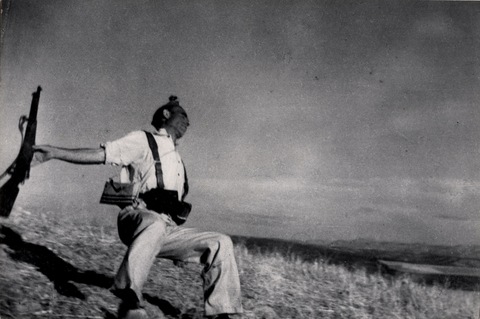 War photographer Robert Capa would be 100 years old Tuesday, and marking his birthday, the International Center of Photography, which his brother Cornell helped found, has released the first-known recording of Capa’s voice.

Significantly, in this recording of a 1947 interview on the morning NBC radio show “Hi! Jinx.,” Capa explains how he took his famous “Falling Soldier” photograph during the Spanish Civil War. Many have alleged that the photo was staged.

But Capa reveals that he placed the camera over his head to take the photo — never actually viewing what he was capturing. “That was probably the best picture I ever took, and I never saw the picture in the frame because the camera was far above my head.”

Capa, whose first language was Hungarian, was being interviewed about his book, “Slightly Out of Focus,” an autobiographical novel. Capa went on to help found Magnum Photos and died in 1954 covering the French Indochina War. Photographers and photo students alike have him to thank for encouraging them to get closer. “If your photographs aren’t good enough, you’re not close enough,” Capa famously said. In advance of the opening of the ICP exhibit “Capa in Color,” Magnum will be releasing photos from other notable photographers that respond to Capa’s images. The public is invited to participate by tagging their own photos with the hashtag #GetCloser100.