Getting lucky: Why the economy has grown faster under Democratic presidents

2016 is shaping up to be another presidential election about the economy. Democrats are previewing their populist message heading into this fall’s midterms, while Republicans are increasingly talking about economic immobility, campaigning against an Obama economy that they say hasn’t worked for them or their constituents.

Republicans, like any politicians whose party is out of power, argue that the economy will improve under their watch. But if voters looked at history, that’d be a hard story to sell, according to a new study from the strictly non-partisan National Bureau for Economic Research.

For the past 64 years, since Harry Truman was first elected to the White House, Democrat presidents have presided over stronger economies than their GOP counterparts — by almost any measure of economic health.

It’s not just GDP, which Making Sen$e has shown is not always the most reliable of economic indicators. Under Democratic presidents, per capita GDP has been higher; job creation has been stronger; decreases in unemployment have been greater; the S&P 500 stock index has been higher; corporate profits have been bigger; and real wages and labor productivity have increased.

During the past 16 presidential terms, Republican presidents have presided over 41 quarters classified by the National Bureau of Economic Research as recessions. Democrats? Only eight.

If businesses and Wall Street, particularly, prosper under Democratic administrations, why has the GOP traditionally won their support? (Compare the top bundlers for Mitt Romney and Obama for a 2012 refresher.) Ignorance of this Democratic growth trend is one answer, according to the lead author of the provocative new study, just out this week. The “What’s the Matter with Kansas” syndrome — usually applied to blue collar conservatives voting on social values — is another.

Yes, a Democrat sparked this research. And not just any Democrat. Alan Blinder served on the Council of Economic Advisers under President Bill Clinton, who then appointed him vice chair of the Fed. Blinder also advised the presidential campaigns of Al Gore and John Kerry. But the data are unimpeachable, said Blinder, who first noticed this trend — what he calls the economy’s “overperformance” under Democrats and its underperformance under Republicans — eight or 10 years ago. (“Academics move slowly,” Blinder said by way of apology.) 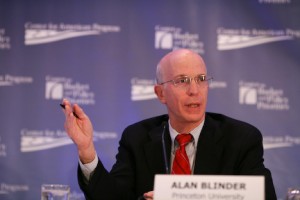 Photo of Blinder by Flickr user Center for American Progress.

Blinder has served on the Princeton economics faculty since 1971, long before his political appointments. His co-author, fellow Princeton professor Mark Watson, Blinder said, identifies with neither political party and brought the statistical acumen needed to assess whether this Democratic overperformance was statistically significant, and if possible, what explains it.

Their findings were so significant, Blinder and Watson write, that they “strain credulity.” That’s pretty strong language for academic economists, a group not known for overstatement. The data? From presidents Truman through Obama, average annualized GDP growth has been 3.3 percent, but Blinder and Watson find a Democrat–Republican performance gap of 1.8 percentage points. Given the average, that’s “just enormous,” Blinder said. (Because of the lagging nature of economic conditions, the economists take care to attribute the first quarter of each president’s term to the previous president.)

But that average growth has been so much higher under Democratic presidents was surprising for another key reason that still baffles Blinder: Constitutionally, the American president just doesn’t have that much control over the economy. “No one knows this better than Barack Obama,” he said, noting that Congress has blocked the president’s efforts to stimulate the economy.

The top four presidential terms for economic growth are Truman’s first elected term, John Kennedy-Lyndon Johnson, Johnson’s elected term and Clinton’s second. As to whether confounding variables, besides party, affected presidential economic success, the authors tested presidents’ prior public service, either in Congress or governors’ mansions, but found no correlation. They did find that economic growth has been higher under younger and taller presidents, but not in a way that’s statistically significant.

Statistical analysis showed that partisan control of 1600 Pennsylvania Avenue explained the performance gap in GDP; Blinder’s long-noted casual observation was correct, and when they saw the data, Blinder said, other economists stopped chalking up the partisan variance to mere coin tossing.

The bigger, more troubling question, which Blinder and Watson try to address in this paper, is why?

The obvious explanation for partisan-variant performance, Blinder said, would be monetary and especially fiscal policy, since the latter is explicitly political. But the partisan difference there was small and not necessarily in Democrats’ favor, with some Republican policies stabilizing the economy more. That brought them no closer to an answer.

Next, the authors considered variables that might not be policy-related, or at least not directly. They moved from looking at “good policy” to “good luck” variables, although Blinder admitted the line between them is fuzzy. For that, they turned to history. The most salient variable they found was oil shocks.

Everyone knows, Blinder said, that when oil prices go up, it’s bad for the American economy. Oil prices have gone up more under GOP presidents. That could be just bad timing for those chief executives. But it could be linked to policy — more likely foreign policy — as when George W. Bush’s invasion of Iraq provoked what Blinder called “long-lasting and severe” oil shocks.

Even earlier, the economic growth in Richard Nixon’s second term came to a halt with OPEC I in 1973; the oil shock contributed to slower growth under Nixon-Gerald Ford, compared to Kennedy-Johnson, the authors write. Oil shocks also fed Jimmy Carter’s inflationary woes in the late 1970s, although his administration still saw higher real GDP growth than under Ford.

Productivity shocks are the second biggest explanation for the partisan gap, said Blinder; productivity contributes more to growth under Democrats than Republicans. Once again, though, some of that is just luck; the Clinton administration, for example, coincided with the commercialization of the Internet.

The third factor is foreign economic growth. When Europe grew faster, for example, so did the United States. It just so happened that Democrats occupied the White House during more favorable international economic periods.

The final factor is what Blinder called self-fulfilling prophecy. That is, if Americans know the economy grows faster under Democrats, they might buy and produce more products to make that happen. Of course, Blinder said, that idea “is slightly puzzling since 10 minutes ago, I was talking about people not knowing this phenomenon” — higher growth under Democrats — even exists.

Here’s where more luck, in the research department anyway, is needed. These “luck” factors account for only about half the 1.8 percentage point observed gap; the remaining explanation, Blinder and Watson write unequivocally, is a mystery.

Blinder’s hopeful that he — or someone else — thinks of another measurable variable that explains the gap. Clues from the international community might not be much help. As the authors point out, only Canada, and no European parliamentary democracy, exhibits similar partisan performance gaps as the U.S.

For now, Blinder’s out of ideas, comforted by the idea that his paper might be one small step toward popularizing the disconnect between economic interests and voting behavior. If you have any hypotheses of your own, you might let us know.

Left: The average rate of economic growth has been faster under Democratic presidents than under Republicans. Photo by GEORGE BRIDGES/AFP/Getty Images