WASHINGTON (AP) — The worst of the online glitches, crashes and delays may be over for the problem-plagued government health care website, the Department of Health and Human Services said Sunday. 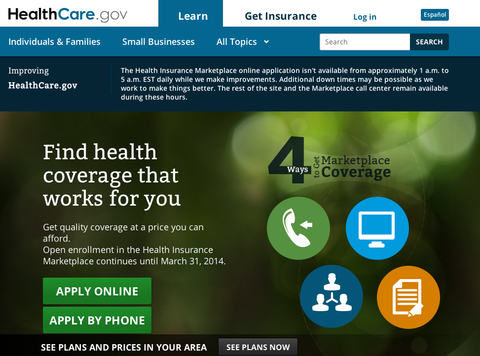 But that doesn’t mean HealthCare.gov is ready for a clean bill of health.

Officials acknowledged more work remains on the website that included hundreds of software bugs, inadequate equipment and inefficient management for its national debut two months ago. Federal workers and private contractors have undertaken an intense reworking of the system, but the White House’s chief troubleshooter cautioned some users could still encounter trouble.

“The bottom line — HealthCare.gov on Dec. 1 is night and day from where it was on Oct. 1,” Jeff Zients told reporters.

More than 50,000 people can log on to the website at one time and more than 800,000 people will be able to shop for insurance coverage each day, the government estimated in a report released Sunday. If true, it’s a dramatic improvement from the system’s first weeks, when frustrated buyers watched their computer screen freeze, the website crash and error messages multiply.

The figures — which could not be independently verified — suggest millions of Americans could turn to their laptops to shop for and buy insurance policies by the Dec. 23 deadline.

“There’s not really any way to verify from the outside that the vast majority of people who want to enroll can now do so, but we’ll find out at least anecdotally over the coming days if the system can handle the traffic and provide a smooth experience for people trying to sign up,” said Larry Levitt, a senior adviser at the Kaiser Family Foundation.

But, he added, HealthCare.gov is clearly working better than when it first went online. Its challenge now is to convince users who were frustrated during their first visit to give it another chance.

Politically, a fixed website could also offer a fresh start for President Barack Obama and his fellow Democrats after a wave of bad publicity surrounding the president’s chief domestic achievement.

“This website is technology. It’s going to get better. It’s already better today,” said Rep. Keith Ellison, a Minnesota Democrat who is a co-chairman of the liberal Congressional Progressive Caucus. “And we’re only going to be working out more kinks as we go forward.”

HealthCare.gov was envisioned as the principal place for people in 36 states to buy insurance under Obama’s health care law. But its first few weeks were an embarrassment for the administration and its allies.

Obama set Saturday as the deadline to fix several significant problems and the administration organized a conference call with reporters Sunday morning to boast that 400 technical problems had been resolved. Officials, however, declined to say how many items remain on the to-do list.

Even with the repairs in place, the site still won’t be able to do everything the administration wants, and companion sites for small businesses and Spanish speakers have been delayed. Questions remain about the stability of the site and the quality of the data it delivers to insurers.

“The security of this site and the private information does not meet even the minimal standards of the private sector, and that concerns me,” said Rep. Mike Rogers, the Michigan Republican who leads the House intelligence panel. “I don’t care if you’re for it or against it, Republican or Democrat, we should not tolerate the sheer level of incompetence securing this site.”

Obama promised a few weeks ago that HealthCare.gov “will work much better on Nov. 30, Dec. 1, than it worked certainly on Oct. 1.” But, in trying to lower expectations, he said he could not guarantee that “100 percent of the people 100 percent of the time going on this website will have a perfectly seamless, smooth experience.”

Obama rightly predicted errors would remain. The department reported the website was up and running 95 percent of the time last week — meaning a 1-in-20 chance remains of encountering a broken website. The government also estimated that pages crashed at a rate less than once every 100 clicks.

“Yes, there are problems,” said Rep. Chris Van Hollen of Maryland, the top Democrat on the House Budget Committee. “There’s no denying that. Let’s work to fix them.”

The nation’s largest health insurer trade group said significant problems remain and could be a barrier for consumers signing up for coverage effective Jan. 1.

“HealthCare.gov and the overall enrollment process continue to improve, but there are significant issues that still need to be addressed,” said Karen Ignagni, president and CEO of America’s Health Insurance Plans.

Republicans, betting frustration about the health care law is their best bet to make gains in 2014’s congressional and gubernatorial elections, continued their criticism of the system.

Democrats, sensing their potential vulnerability, sought to blame Republicans for not offering ideas on how to improve the website.

“Yes, we have to fix it. We should be working together to fix it,” said Van Hollen, a former chairman of the committee tasked to elect more Democrats to the U.S. House.

The first big test of the repaired website probably won’t come for a few more weeks, when an enrollment surge is expected as consumers rush to meet a Dec. 23 deadline so their coverage can kick in on the first of the year.

Avoiding a break in coverage is particularly important for millions of people whose current individual policies were canceled because they don’t meet the standards of the health care law, as well as for a group of about 100,000 in an expiring federal program for high-risk patients.

Ellison spoke to ABC’s “This Week.” Rogers and Van Hollen were interviewed on NBC’s “Meet the Press.” Corker joined CBS’ “Face the Nation.”

Leah Clapman is the Managing Editor of Education. In 2009, she created Student Reporting Labs, a video journalism training initiative in over 150 schools and 46 states that translates NewsHour values of excellence, responsibility and trust into an innovative project-based learning program. She founded NewsHour Extra, which provides lesson plans and PBS Learning Media curricula for teachers, and helped launch and manage “Making the Grade,” the NewsHour’s weekly focus on education issues, policy and practice, and “Rethinking College,” the NewsHour’s annual series on change and innovation in higher ed.