AUSTIN, Texas — Stores in Texas can begin selling merchandise with curbside service, and hospitals can resume nonessential surgeries. In Florida, people are returning to beaches and parks. And protesters are clamoring for more.

Governors eager to rescue their economies and feeling heat from demonstrators and President Donald Trump are moving to ease restrictions meant to control the spread of the coronavirus, even as new hot spots emerge and experts warn that moving too fast could prove disastrous.

Protests against stay-at-home orders organized by small-government groups and Trump supporters were planned for Saturday in several cities after the president urged supporters to “liberate” three states led by Democratic governors.

But protests were planned in Republican-led states, too, including at the the Texas Capitol and in front of the Indiana governor’s home. Republican Texas Gov. Greg Abbott has already said that restrictions will begin easing next week, while Indiana Gov. Eric Holcomb — who signed an agreement with six other Midwestern states to coordinate reopening — said he would extend his stay-at-home order until May 1.

Rhode Island, sandwiched between the hot spots of Massachusetts and New York, has seen a steady daily increase in the number of infections and deaths, with nursing home residents accounting for more than 90 of the state’s 118 deaths. The state’s death rate of around 10 people per 100,000 population is among the highest per capita in the nation, according to data compiled by the COVID Tracking Project.

Massachusetts had its highest number of deaths in a single day on Friday with 159. Republican Gov. Charlie Baker said it would be premature for states to begin lifting restrictions when deaths are still climbing. Citing the advice of health experts, he said states should look for infection rates and hospitalizations to be on the decline for about two weeks before acting.

Trump, whose administration waited months to bolster stockpiles of key medical supplies and equipment, appeared to back protesters taking to the streets in several U.S. states to vent their anger with the restrictions. 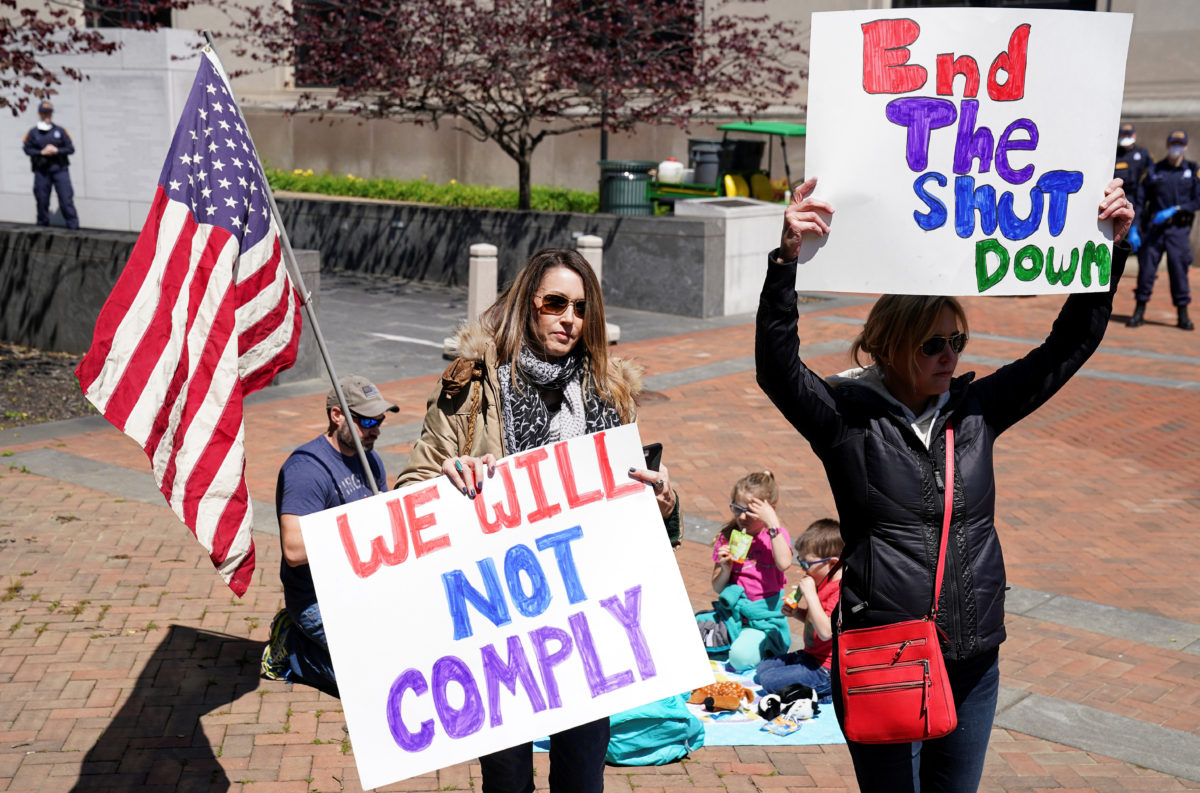 Demonstrators hold signs as they gather in opposition to Virginia’s stay-at-home order and business closures in the wake of the coronavirus disease (COVID-19) outbreak, during a small protest against the lockdown measures in Richmond, Virginia, U.S., April 16, 2020. Photo by Kevin Lamarque/Reuters.

“LIBERATE MINNESOTA!” “LIBERATE MICHIGAN!” “LIBERATE VIRGINIA, ” Trump said in a tweet-storm in which he also lashed out at New York Gov. Andrew Cuomo, a Democrat, for criticizing the federal response. Cuomo “should spend more time ‘doing’ and less time ‘complaining,’” the president said.

A few hundred demonstrators cheered and waved signs Saturday outside the Statehouse in New Hampshire, which has had nearly 1,300 cases of the virus and more than three dozens deaths through Friday.

“Even if the virus were 10 times as dangerous as it is, I still wouldn’t stay inside my home. I’d rather take the risk and be a free person,” said one of the protesters, talk show host Ian Freeman.

Trump is pushing to relax the U.S. lockdown by May 1, a plan that hinges partly on more testing.

Public health officials said the ability to test enough people and trace contacts of those who are infected is crucial before easing up on restrictions, and that infections could surge anew unless people continue to take precautions.

Some Asian nations that until recently appeared to have the outbreak under control, including Singapore and Japan, reported a fresh increase in cases Saturday.

Japan’s total case number rose above 10,000 on Saturday. Prime Minister Shinzo Abe has voiced concern that people are not observing social distancing and announced a 100,000-yen ($930) cash handout to each resident as an incentive to stay home.

Singapore reported a sharp, one-day spike of 942 infections, the highest in Southeast Asia, mostly among foreign workers staying in crowded dormitories. That brought the total to almost 6,000 in the tiny city-state of 6 million.

The issue of when — and how — to ease the restrictions designed to control the pandemic are vexing governments around the world after weeks of mandatory lockdowns that have brought widespread economic hardship.

In a joint statement Saturday, foreign ministers from 13 countries, including Canada, Brazil, Italy and Germany, called for global cooperation to lessen the economic impact of the pandemic.

“It is vital that we work together to save lives and livelihoods,” they said.

The statement was also backed by Britain, France Indonesia, Mexico, Morocco, Peru, South Korea, Singapore and Turkey. It said the countries were committed to “coordinate on public health, travel, trade, economic and financial measures in order to minimize disruptions and recover stronger.”

Those efforts include maintaining “air, land and marine transportation links” to ensure the continued flow of goods including medical equipment and aid, and the return home of travelers, they said after a virtual meeting late Friday.

There have been tentative signs that measures to curb the outbreak are working, with the rate of new infections slowing across Europe.

France and Spain started dismantling some field hospitals, while in Germany the number of active cases has slowly declined over the past week as people recover.

France’s national health agency said Saturday that the number of virus patients in intensive care dropped for the 10th day straight, and the number of overall virus hospitalizations has fallen for three consecutive days. The country has seen almost 20,000 virus deaths.

The agency urged the French public to stick to the country’s strict confinement measures, which have been extended until at least May 11: “Together, we will vanquish the pandemic. Don’t relax our efforts at the moment when confinement is bearing fruit.”

Spain’s children have been confined to their homes for five weeks, prompting some parents to ask that they be to allowed to at least take a daily walk. The government says it is studying how to cautiously roll back lockdown measures, but that it is too soon to let kids out since they are a major source of transmission even if they rarely fall ill from the virus.

Fernando Simón, a leading Spanish health official, said Saturday: “For children to go outside, we need to see a sufficiently small number of new cases to ensure that the epidemic won’t explode again and so that we won’t be putting at risk our patients and our hospitals. … We are close, but we need to go day to day.”

Most governments and public health officials remain cautious about relaxing the shutdowns, despite the mounting economic toll.

“It’s wrong, sensationally wrong, to communicate that there is a kind of conflict with health and safety on one side and economic resumption,” said Domenico Arcuri, Italy’s extraordinary commissioner for the coronavirus emergency.

“Without health, the (economic) revival will disappear in the batting of an eyelash,” Arcuri told reporters Saturday.

The Italian government’s decree, shutting down nonessential industries and businesses, runs through May 3. Health experts are advising that any easing must be gradual in the country that’s seen the most deaths so far in Europe, with more than 23,000 fatalities and nearly 176,000 known cases.

Iran, hard hit by the virus and international sanctions, allowed some businesses in the capital and nearby towns to re-open Saturday after weeks of lockdown. Gyms, restaurants, shopping malls and Tehran’s grand bazaar will remain closed.

In Africa, one of the world’s poorest regions, the pandemic is only just getting underway. The continent has now recorded more than 1,000 coronavirus deaths, among them the Nigerian president’s chief of staff, and more than 20,000 cases.

While most of those sickened by the virus recover, the outbreak has killed at least 155,000 people worldwide, according to a Johns Hopkins University tally based on figures supplied by government health authorities around the globe.

The number all but certainly underestimates the actual toll. Authorities said that almost everywhere, thousands have died with COVID-19 symptoms — many in nursing homes — without being tested for the virus, and have thus gone uncounted.

Jordans reported from Berlin. Associated Press journalists from around the world contributed to this report.

Left: Protesters against the state's extended stay-at-home order to help slow the spread of the coronavirus disease (COVID-19) demonstrate at the Capitol building in Austin, Texas, U.S., April 18, 2020. Photo by Callaghan O'Hare/Reuters.