Residents of Ferguson, Missouri, have been on edge for months as jurors deliberated the facts behind Michael Brown’s death at the hands of Ferguson police officer Darren Wilson.

Wilson shot and killed the unarmed Brown, 18, on Aug. 9. Police say Wilson, who is white, struggled with Brown over his service weapon before firing the fatal shots. Others, including Brown’s family and some witnesses, say Brown was running away, or surrendering with his hands up, at the time of his death.

We are profoundly disappointed that the killer of our child will not face the consequence of his actions.

While we understand that many others share our pain, we ask that you channel your frustration in ways that will make a positive change. We need to work together to fix the system that allowed this to happen.

Join with us in our campaign to ensure that every police officer working the streets in this country wears a body camera.

We respectfully ask that you please keep your protests peaceful. Answering violence with violence is not the appropriate reaction.

Lawyers for Wilson asked for calm and also thanked supporters:

McCulloch spoke for several minutes before announcing the decision, cataloging the state’s evidence presented during the three-month process.

“Physical evidence does not change because of public pressure or personal agenda,” he said.

In the days following Brown’s death, protesters took to the Ferguson streets for marches that were often peaceful, but sometimes turned violent. Law enforcement alleged that some protesters were rioting and looting, while activists claimed police used excessive force.

Speculation swirled throughout the days leading up to the decision; information leaked in dribs and drabs from the courthouse’s closed doors as activists and ordinary citizens alike tried to predict, and prepare for, any verdict. 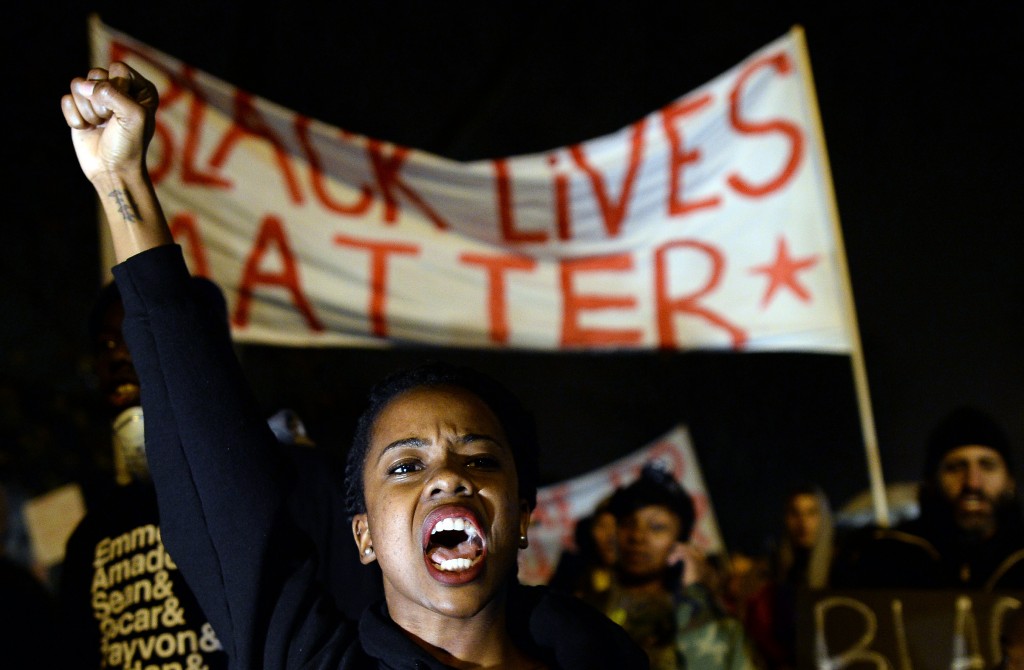 Demonstrators chanted slogans as they marched through the streets of St. Louis on Sunday in anticipation of a decision from the grand jury in the shooting of teenager Michael Brown by Ferguson police officer Darren Wilson. Photo by Jewel Samad/AFP/Getty Images

Earlier this month, Gov. Jay Nixon announced a multi-agency contingency plan for the moments and days immediately following the decision. Saying he expected peaceful protests, he nonetheless made clear the state was prepared to respond to violence.

Last week Nixon declared an official state of emergency, which will allow him to activate the National Guard.

“My hope and expectation is that peace will prevail,” Nixon said. “But I have a responsibility to plan for any contingency that might arise.”

Protesters marched peacefully through several neighborhoods across St. Louis on Sunday night. But those who are marching aren’t only there to speak out about Michael Brown. Many said they were marching for all victims of police shootings.

But he has also expanded that demand for peace to include law enforcement. Some have criticized police officers’ response to August’s first wave of unrest, when they used tear gas and rubber bullets to disperse crowds.

While Brown’s death initially incited anger about police brutality, subsequent responses to protesters have expanded the national debate about race and police procedure.

But he also encouraged protesters to behave peacefully. “History has also shown us that the most successful and enduring movements for change are those that adhere to nonaggression and nonviolence,” he said.

The Justice Department, which Holder oversees, is conducting an ongoing investigation into allegations of discriminatory practices within the Ferguson police department.

Brown’s parents testified before a U.N. committee on torture on Nov. 12, as part of a coalition speaking out against racial profiling and police brutality. In a written report from that session, the delegation called for Wilson’s arrest, and urged the Justice Department to investigate police harassment of minority communities.

In a video released Thursday by the group STL Forward, Brown’s father echoed that call, but also called upon protesters to respect the grand jury’s decision.

“I thank for you raising your voice to end racial profiling and police intimidation, but hurting others or destroying property is not the answer,” Brown Sr. said. “No matter what the grand jury decides, I do not want my son’s death to be in vain. I want it to lead to incredible change, positive change, change that makes the St. Louis region better for everyone.”

Since Aug. 20, the 12-person St. Louis County grand jury has been meeting in secret to hear evidence in the case. Nine votes were required to send Wilson to a public trial.

Paul Butler, a scholar of criminal justice and race relations law at the Georgetown University Law Center, said the community’s distrust of McCulloch would color any response to the grand jury’s decision.

“The problem is that the community has no confidence in its prosecutor, or in the integrity of the process,” Butler said. “If another prosecutor had examined the case or presented evidence to the grand jury, a decision not to go forward would have more credibility.”

The St. Louis Post-Dispatch reported that protesters called on Gov. Nixon to appoint a special prosecutor for the case, a request the governor denied.

But, he added, “Whatever the grand jury decides in Missouri will not bring Michael back.”