Here’s the dirt on low-cost, less-water gardening in a drought

It’s the first day of spring, and our thoughts have turned to gardening, despite the snow, rain and bitter cold we haven’t quite escaped here in the mid-Atlantic.

With many areas in the southwest facing a severe water shortage, gardening might not top everyone’s priority list. Just yesterday, for example, more than 37 million residents in California were asked to restrict their water use due to a four-year historic drought. And it’s not just California. Wide swaths of the western and and southwestern United States are experiencing some degree of drought.

Her solution? Teach people how to grow gardens that use limited resources and ultimately “translate food into money.”

How to build a wicking bed

A wicking bed is a type of garden that thrives in urban environments. It can be built atop trash, and is designed to use minimal water. 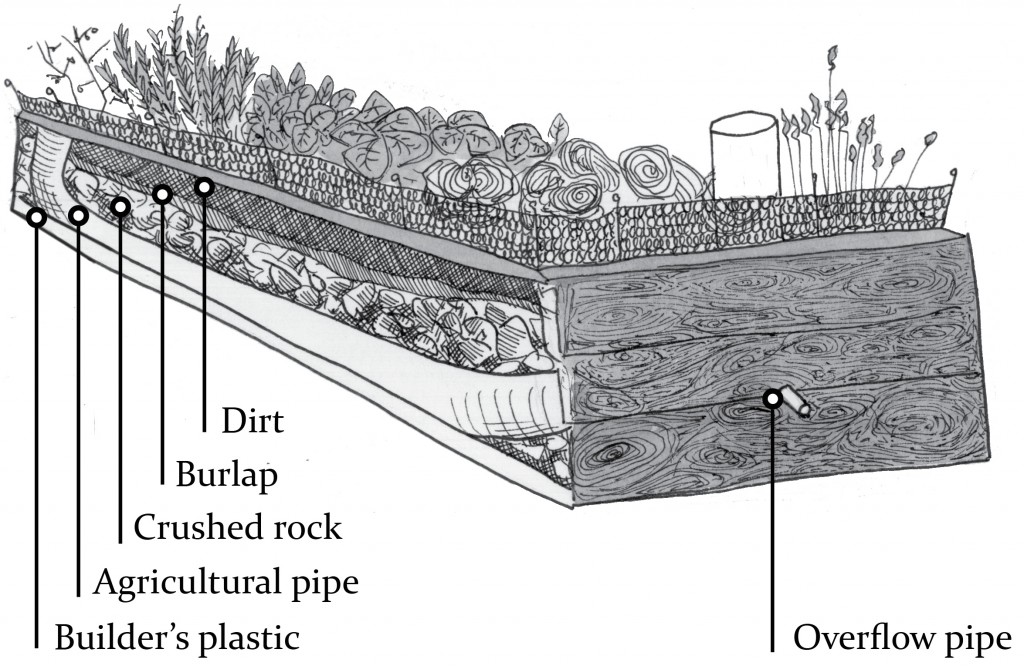 1. Line the bottom of a pallet box with a sheet of builder’s plastic.
2. Lay a piece of agricultural pipe, the length of the box, on top of the plastic. Attach a standing PVC pipe to one end of the pipe. You’ll pour water into the opening of the PVC every two weeks, essentially using 75 percent less water than a typical water hose method.
3. Cut a small drainage hole along one of the sides of the box. Insert small overflow pipe.
4. Fill the box about two-thirds of the way with crushed rock.
5. Lay down a piece of burlap on top of crushed items.
6. Cover the burlap with two feet of dirt.
7. Plant seeds, watch them grow.

How to build a keyhole garden

Keyhole gardening was developed in Africa where soil is often poor quality. The garden is relatively simple to build, and nourishes an ample harvest with little waste. 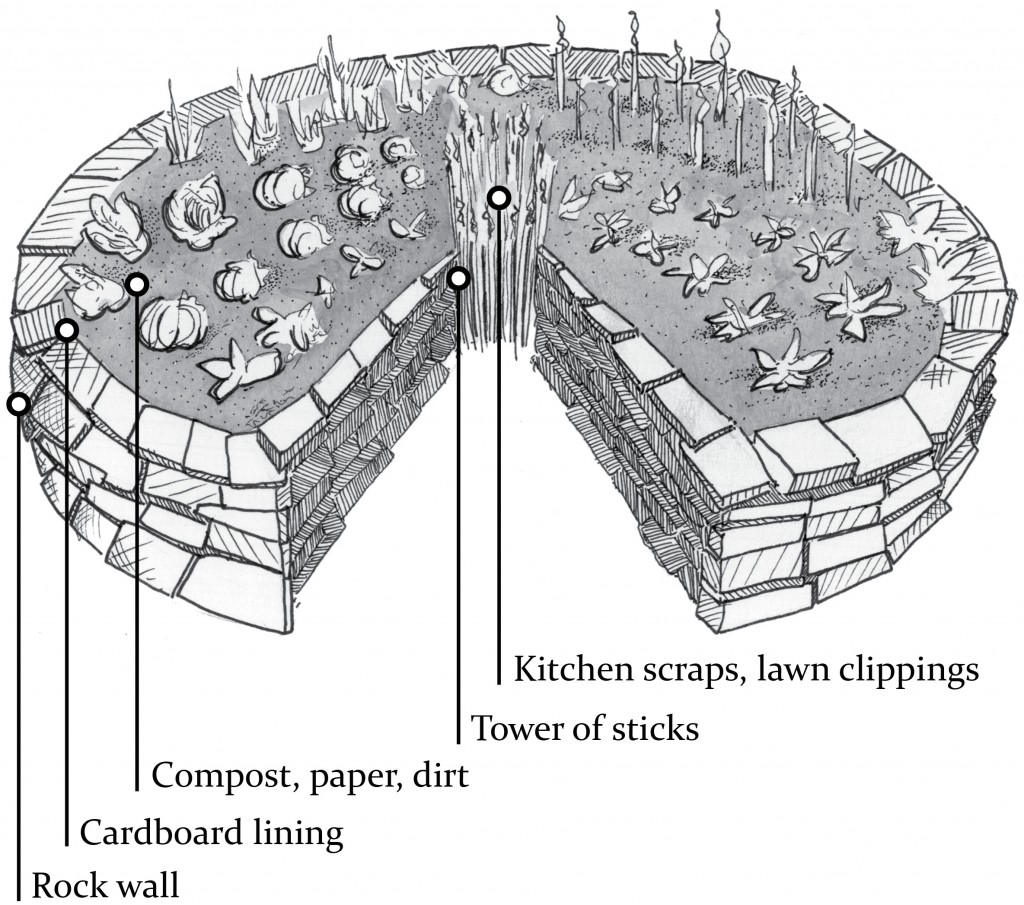 1. Build a rock wall circle about six-feet in diameter and three feet tall, creating a notch to access the center.
2. Using sticks or metal wire, create a tower in the center of the circle.
3. Line the inside of the circle wall with cardboard.
4. Fill the section surrounding the tower with compost, paper, and two inches of dirt.
5. Fill the tower with kitchen scraps (fruits, vegetables).
6. Water the tower and surrounding area sparingly.
7. Continue to fill the center tower with kitchen scraps, lawn clippings, etc.
8. Eventually, the nutrients from the compost will filtrate into the dirt, breaking down papers and turning the dirt into high quality. The seeds from scraps will spread and grow.

How to build a basic garden

Danny Swan, founder of Grow Ohio Valley, says that growing a garden can be as simple as “laying newspaper on the ground.”

“We’re standing on top of grass that looks like anyone’s backyard,” he says, pointing to the acre of vegetable-rich land around him. 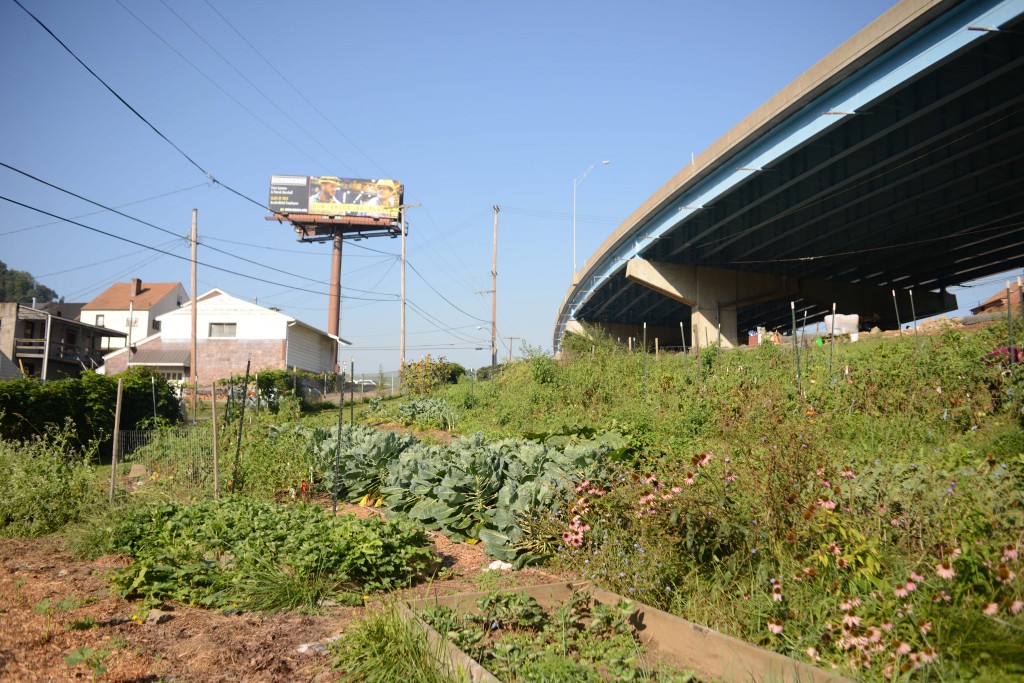 1. Lay newspapers and cardboard over existing grass, covering the area completely. This step will kill the grass by depriving it of sunlight.
2. Throw down mulch — grass clippings, leaves, woodchips — on top of the covered area to keep newspaper and cardboard from blowing away.
3. Wait about a month for grass to fully die and for dirt to absorb paper. What you’re left with is mulch and dirt, rich in nutrients. That means your plants will grow faster.
4. Using your hands, dig a hole into the dirt, plant seeds and wait for crops to grow.

Swan says that growing a garden can be empowering. But if the end result seems like a daunting task, he recommends growing what you eat to make it feel worth your while:

“The idea that I could plant a plant in April, come back in September, and make salsa out of it? What’s cooler than that?”

Left: Will you be gardening this spring? Photo by Ariel Min.