How a hashtag turned into an international adjunct movement

Adjunct faculty across the country Wednesday went off syllabus. They staged teach-ins and demonstrations to raise awareness about what it means to be an adjunct professor in America.

Adjuncts make up half of all college and university professors, but they earn an average of only $2,000 to $3,000 per course. Mary-Faith Cerasoli, an adjunct professor of English and Italian, made $22,000 last year, with no health insurance. She taught a full course load, but made too much to qualify for public assistance. Unable to afford her own place to live, she was homeless when Making Sen$e spoke with her last year.

Just to get a full course load, many adjuncts have to teach on multiple campuses, miles apart. Like academic nomads, their cars are their offices, and their backpacks are their filing cabinets.

Feb. 25 was originally conceived on social media as National Adjunct Walkout Day, but it grew as a grassroots effort that took on many different forms in different places. Teach-ins, rallies and talks were much more common than walkouts, given contract and union agreements that made walking out risky for many adjuncts.

At least 25 chapters of the American Association of University Professors participated, as well as many other union-affiliated and independent adjunct groups. Organizers are still tallying exactly how many campuses saw some sort of action, but the map below from National Adjunct’s Tumblr gives an idea of its breadth. 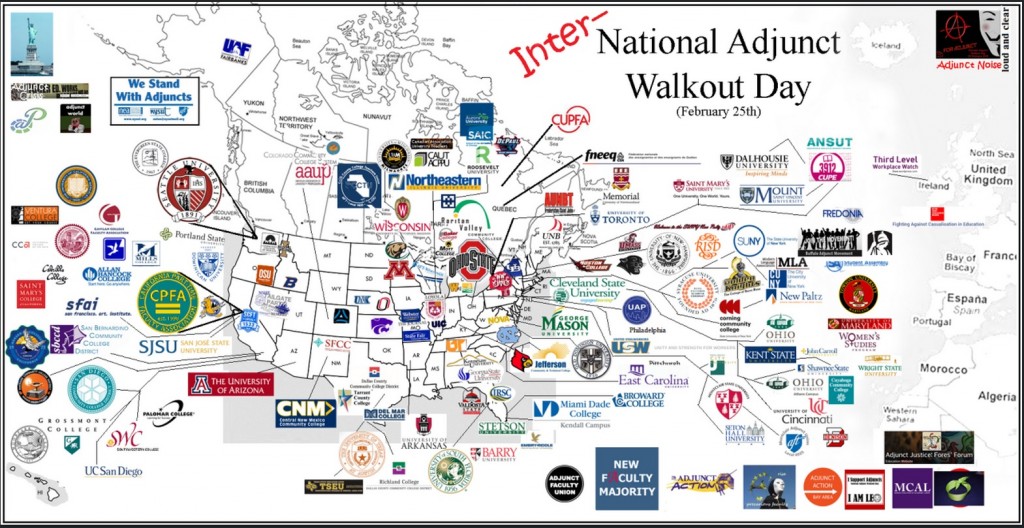 The largest actions were on the West Coast, according to Inside Higher Ed.

Students organized and led San Francisco Art Institute’s walkout, which was planned for lunchtime, said adjunct English and critical studies professor Jessica Beard. Because SFAI’s adjunct union is still at the bargaining table with the administration, they didn’t want to disrupt the schoolday or put pressure on anyone to abandon classes, she said. Winning people over to their cause, Beard explained, was much more important.

The SFAI administration responded skeptically in a public statement. “The SFAI Administration would be surprised if our own adjuncts were participating, as SFAI faculty are represented by SEIU and we are currently in contract negotiations, which they have agreed we are conducting in good faith.”

The argument that students are the ones most affected by the increasing reliance on underpaid adjuncts is central to the adjunct movement, as former adjunct Joe Fruscione has explained in detail on Making Sen$e.

“As a student, it’s difficult to form a relationship with your professor when neither of you know if your professor will even be employed next semester,” SFAI student organizer Ross McKinney told Inside Higher Education.

There’s plenty of focus on the economic injustice of adjuncting, said Beard, but relatively little attention is paid to the commitment to students that adjuncts want to — but often cannot — provide, given that they’re only on campus for short stints. The struggle, Beard said, “is about loving what we do and investing in the students, and not having that reciprocated by the institution.”

When a college contracts ‘adjunctivitis,’ it’s the students who lose

At Mills College, the adjuncts’ nine-month-old union opened up their monthly meeting to the public as a teach-in and community forum. About 40 people — from tenure-track faculty, undergraduate and graduate students and other activists from the Fight for 15 campaign and Strike the Debt — showed up. There was no walkout because of ongoing union bargaining, said Mills adjunct professor of English David Buuck.

The alliance between fast-food workers and Ph.D. adjuncts was especially powerful, said Miranda Merklein, an adjunct organizer with New Faculty Majority, who attended various campus actions in the San Francisco Bay area. Buuck agreed. The purpose of Mills’ activities, he added, was to create a larger conversation about what it means to be a so-called “precarious worker” in higher education specifically, and in America more generally.

Discontent among adjuncts has been brewing for decades, but the death of Duquesne adjunct Margaret Mary Vojtko, chronicled in a Pittsburgh-Post Gazette op-ed in September 2013, was a rallying cry for the community, said adjunct organizer Robert Baum.

What parents need to know about college faculty

“When I read ‘Death of an Adjunct,’ that was the moment. I was fully activated,” echoed Merklein.

Across the country, adjunct faculty have started forming unions to represent themselves. Adjunct Action is the higher education campaign of the Service Employees International Union, and some campuses have started their own chapters, like Georgetown’s SEIU. SEIU Local 1021 represents five schools in the San Francisco Bay Area, including those that staged activities Wednesday.

There are also non-profit organizing groups, like the New Faculty Majority, which connect adjuncts with unions in their areas if they want to organize. NFM members have briefed Congressional staffers about the struggles of so-called contingent faculty. The recently founded non-profit PrecariCorps, which provides emotional and financial support to adjuncts, began accepting donations on Wednesday to coincide with the walkout day.

This latest movement emerged somewhat mysteriously on Twitter last October, said Baum. “I was afraid it was just a bot or an avatar,” he said. No one knew who was behind the hashtag or what would come of it. 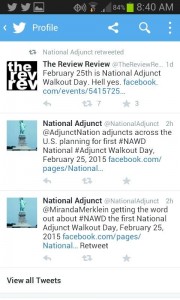 The precursor to Wednesday’s actions actually started much earlier than last fall, Merklein said, with a different hashtag calling for an #AdjunctGeneralStrike at the end of 2013. But organizers quickly realized that publicizing that kind of action on the Internet could deflate their efforts and put their jobs at risk. Activists then kept their discussions to private chat rooms instead.

When one adjunct from San Jose State University tweeted #NationalAdjunctWalkOutDay last fall, now also known as #NAWD, the movement took off organically. But while it gained momentum on social media, no one knew what exactly would happen on Wednesday. “Up until a week ago, we thought maybe it would just be a digital revolution,” Baum said.

“I think yesterday showed everyone,” Merklein told Making Sen$e on Thursday. “We do have the power, we always did.”

Left: Students, adjunct faculty and community members marched through the campus of the San Francisco Art Institute on National Adjunct Walkout Day on Feb. 25. Photo by Jennifer I. Smith-Camejo/SEIU Local 1021, used by permission for Making Sen$e.