Why hate crimes are so difficult to convict

On June 17, 2015, just after 8 p.m., 21-year-old Dylann Roof walked into a bible study session at the historically black Emanuel African Methodist Episcopal Church in Charleston, South Carolina with a .45-caliber Glock pistol and seven extra loaded magazines. He sat in the prayer meeting for nearly an hour before opening fire on the worshippers, murdering nine people, including the pastor.

A website discovered shortly after the shooting and registered under Roof’s name showed him posing with the confederate flag, embracing Nazi symbols and included a manifesto that supported segregation and criticized black people as inferior.

“You need to prove not just the incident, but the state of mind of the defendant — that what they intended was hate-motivated.”

On Dec. 15, Roof was found guilty on 33 counts of federal hate crimes. He now faces the death penalty. The sentencing portion of his trial resumed this week. Prosecutors convicted Roof on the hate crimes charges by pointing to a documented history of racial bias both from character witnesses and internet activity. In this case, the strength of circumstantial evidence played a major role in Roof’s conviction.

A hate crime is defined by the FBI as a “criminal offense against a person or property motivated in whole or in part by an offender’s bias against a race, religion, disability, sexual orientation, ethnicity, gender, or gender identity.”

But prosecuting these criminal incidents is often a complicated and arduous process. No national agency tracks conviction rate data nationwide, said Michael Lieberman, who directs the Anti-Defamation League’s Civil Rights Policy Planning Center: “No one does it, and we would really like it if they would.”

However, a handful of states do monitor how often prosecutors secure convictions in hate crimes cases, Lieberman said. California, he said, is one of them.

In California, there were 837 hate crime incidents in 2015, up 10 percent from the previous year, according to a report from the California Department of Justice. California prosecuted 189 hate crime cases in 2015 (these crimes were not necessarily committed that year). When California issued its 2015 hate crime report, the state confirmed that of those 138 cases with final court rulings, less than half — 59 cases — resulted in hate crime convictions. 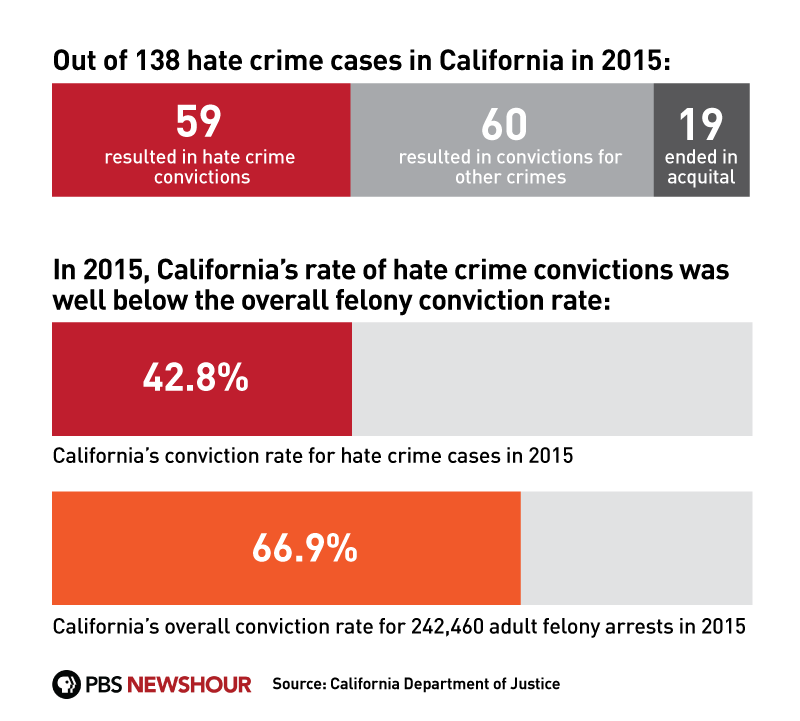 According to the Anti-Defamation League, 45 states and the District of Columbia have passed hate crime laws, but they vary widely in how a hate crime is defined and prosecuted. Congress attempted to bolster the nation’s existing federal hate crime laws by passing the Shepard Byrd Hate Crimes Prevention Act in 2009. The legislation is named after two hate crimes victims, Matthew Shepard, a 21-year-old college student from Wyoming and James Byrd Jr., a 49-year-old African-American man from Texas. Both men were killed in 1998 following brutal attacks — Shepard was targeted for his sexual orientation and Byrd was murdered by white supremacists.

A November FBI report concluded there were more than 5,800 hateful incidents involving 7,100 victims in 2015 alone. Police departments voluntarily submit these reports through the FBI’s Uniform Crime Reporting Program database. Despite measures to streamline hate crimes prosecutions, these reports likely still don’t present the full picture of how widespread hate is in the United States.

When hateful incidents erupt, law enforcement response is critical in determining how safe a community feels, but police must first realize what they are up against, Lieberman said: “The most important thing is training police departments to identify, report and respond to a hate crime.”

“If the cop says, ‘These are just kids. Nothing to do here. Move along,’ then that’s terrible,” Lieberman said. “We need police to say, ‘This is wrong.’”

Left: A newspaper left as a sign of support is pictured at a makeshift memorial at Emanuel African Methodist Episcopal Church in Charleston. Dylann Roof, a 21-year-old with a criminal record, faces sentencing after he was convicted of killing nine people at a Bible-study meeting in the historic African-American church in Charleston, South Carolina, in an attack U.S. officialsinvestigated as a hate crime. REUTERS/Carlo Allegri