Having a ball: The history behind American New Year’s Eve celebrations

Every year as the clock nears midnight on Dec. 31, the eyes of the world turn to the dazzling lights and bustling energy of Times Square. But why do Americans drop a ball on New Year’s Eve? It started off as a solution to light up the New York sky without the hazard of fireworks.

In cities around the world, from Sydney to Amsterdam, the first seconds of the new year are marked by fireworks. But dropping a ball on New Year’s Eve is a wholly American tradition to count down the last fleeting moments.

The first ball dropped at midnight on New Year’s Eve remains the most famous: the one on top of One Times Square in New York City.

With the creation of standard time, time balls were invented so that sailors could adjust their chronometers, or timepieces, while at sea. With a telescope, they would scope the harbor and watch for a time ball to drop at a specific time, usually noon or 1 p.m. The first time ball was installed in 1829 in Portsmouth, England. The U.S. Naval Observatory followed suit and began dropping a time ball in 1845 in Washington’s Foggy Bottom neighborhood. Soon many port towns and cities adopted the practice. 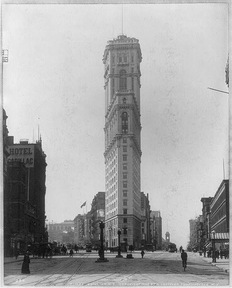 The New York Times building in midtown Manhattan was completed in 1904. Photo by A. Loeffler, Tompkinsville, N.Y./Library of Congress

It was one of these time balls that became the inspiration for Walter Palmer, The New York Times’ chief electrician, who reimagined the maritime timekeeping ritual as a unique finale to the city’s end-of-the-year party.

In 1904, New York City’s New Year’s Eve celebrations moved up to the New York Times building at 46th St and Broadway. Crowds had previously gathered at Trinity Church in downtown Manhattan, near Wall Street, to hear the bells ring at midnight. In lieu of chimes, The New York Times company produced a midnight fireworks spectacle to lure more New Yorkers north. That proved effective but also disastrous when hot ashes, the remnants of the fireworks, rained down onto the streets.

When the New York Police Department banned fireworks, New York Times publisher and owner Adolph Ochs approached Palmer to find a new light display. He sought to combine the time ball tradition with electricity for an unforgettable welcome to 1908.

Upon Palmer’s design, Ochs commissioned the Artkraft Strauss sign company to create a 700-pound ball made of iron and wood with 100 25-watt light bulbs attached to its surface. At midnight, the ball descended down the repurposed mainmast of the battleship USS New Mexico, with a system of pulleys.

The ball was redesigned as new technology and materials became available, Jeffrey Straus noted. As president of Countdown Entertainment and executive producer for New Year’s Eve celebrations in Times Square, Straus organizes television and Web broadcasts of the Times Square. Over the decades, aluminum has replaced iron and halogen lamps and then light-emitting diodes, or LEDs, replaced incandescent bulbs. Some balls have had rhinestones, strobe lights or rotating pyramid mirrors. Computer controls were added in 1995.

What distinguishes the current ball from earlier predecessors is the multitude of lights and crystals. At 11,875 pounds and 12 feet in diameter, the Big Ball has 2,688 Waterford Crystals that refracts the light of 32,256 Philips LEDs.

The crystals have all been replaced with a new design this year, a pattern called “The Gift of Imagination.” Though few see the ball up close, the crystals are carefully crafted with a special meaning for each new year.

The inspiration for the latest design is a reinterpretation of New Year’s resolutions, according to Regan Iglesia, vice president at Waterford Crystal.

“We thought it would be really hard to interpret how to lose weight, or spend less,” Iglesia said. But along with pragmatic resolutions, there are also emotional resolutions that many wish for at the start of the a new year. “We thought it was appropriate to start with the year of imagination.” 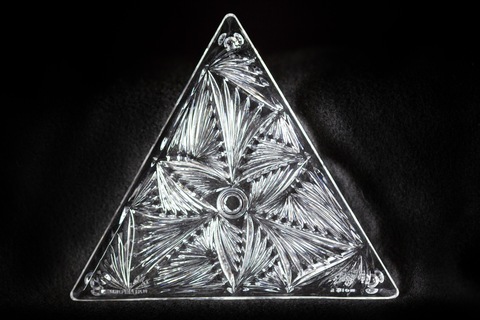 “The Gift of Imagination” was the last design created by master craftsman Jim O’Leary. O’Leary had worked for Waterford Crystal for decades. He passed away on June 8 from cancer at the age of 69. 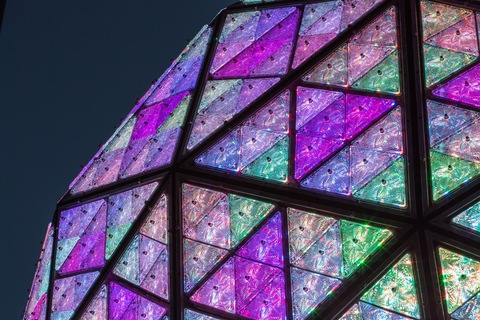 When lit up, the LEDs and crystals can create over 16 million different color combinations. Photo courtesy of Countdown Entertainment, LLC

Technology may have changed since that first drop, but the resulting spectacle has not. At 11:59 p.m. on Dec. 31, the Times Square Ball will start to descend 70 feet. As it comes halfway below the numerals of the New Year, the ball will go dark, the numbers will light up and the year 2014 will dawn in New York.

“I love that last 60 seconds, when everyone just stops and counts together,” said Straus. “It’s a magic moment.”

“I can’t think of any other event or celebration where you have 100 million Americans doing the same thing at the same time together. Wherever you are — out at a party, out with your friends, if you are home with your family — when that ball starts to drop, we all stop and count down those final seconds of the year. It really brings us all together.” 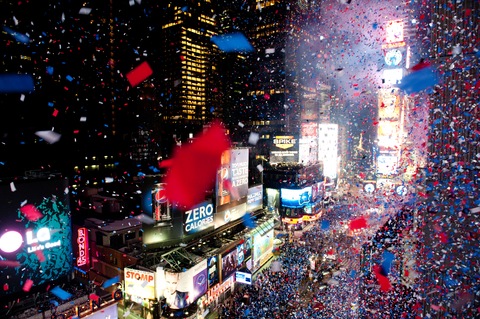