Everything you were embarrassed to ask about Lent and Ash Wednesday

So much of religion centers on food.

The faithful, it seems, are constantly feasting or fasting. Indulging or holding back. In Christianity, this feasting-fasting cycle is never more apparent than during the Easter season, which kicks off with Mardi Gras (feasting!), followed by Lent (fasting!), which finally — and mercifully — culminates in Easter (feasting again!)

Poor bastards. What happened to everything in moderation?

Celebrates: The first day of Lent.

What is Lent? The 40-day “fasting” period leading up to Easter. (Observers are afforded six built-in “breaks” — every Sunday during Lent, which means Lent begins 46 days before Easter.)

Star of the Show: Jesus

Back Story: According to the Gospels, Jesus spent 40 days wandering the desert, and fasting, before beginning his ministry, which led up to his death. Ash represents the idea that people came from ash, and to ash they will return — a reminder of Christians’ mortality. Also, ash is symbolic of penance, contrition and a desire to “burn away” sins. In the early days of the church, only Christians who had committed “grave sins” were marked with ash (Think the “Scarlet Letter A”) and prohibited from reentering the church until they had recited the Seven Penitential Psalms and performed 40 days of “penance and absolution.” Now, of course, Christians partake voluntarily.

Ash Wednesday: Observers attend worship services, where a priest or minister combines ashes with water or a little oil, dips his or her thumb into the mixture, and uses it to make the sign of the cross on parishioner’s foreheads. 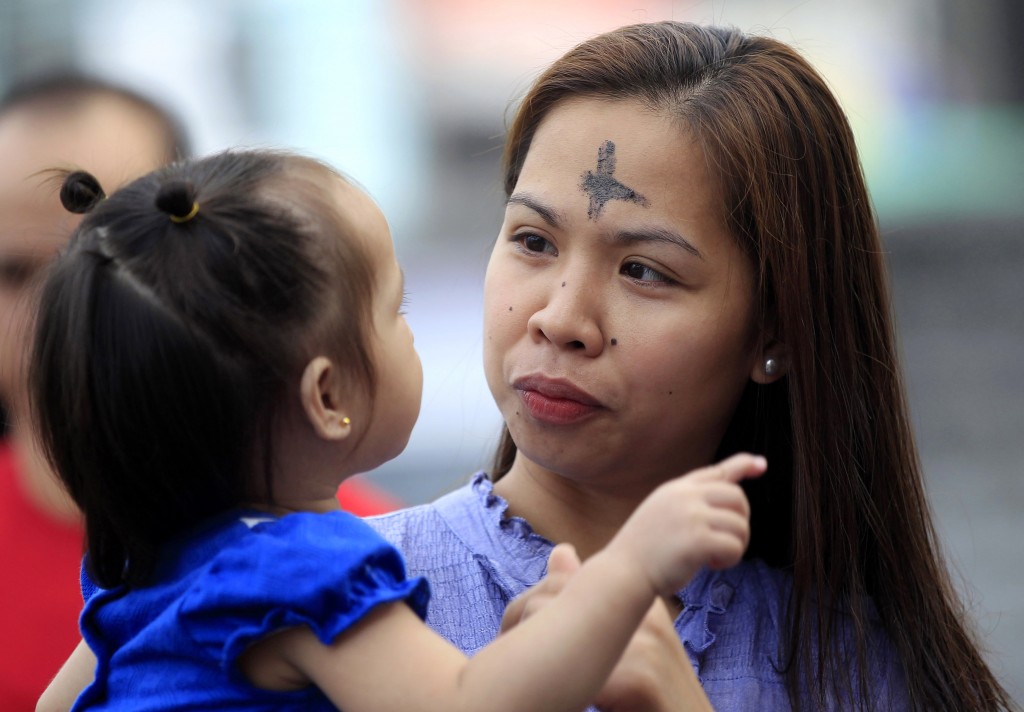 A child looks at her mother after a Catholic nun marked a cross using ash on her forehead during Ash Wednesday at a Catholic church in Manila on February 18, 2015. Ash Wednesday marks the start of Lent. Photo by Romeo Ranoco/Reuters

The Food and Fun: There isn’t much of either, frankly — unless you include Fat Tuesday — which serves as Christians’ last hurray before Lent. Traditionally, Christians are meant to “give up” something they enjoy and instead give to charity. For example, one might give up watching TV and instead donate that time to volunteer work. Or a person might give up Dr. Pepper and use the money saved to buy toys for poor children. That sort of thing. It’s actually a really beautiful idea — taking away something we love and, in a sense, giving it away to someone else. Selflessness at its best.

Conveying meaning to kids: Maybe show a picture of a person with an ashen cross on his head. Explain that, on Ash Wednesday, lots of Christians go to church to receive this symbol. People who receive the cross, you can say, are showing their devotion to God and their desire to turn away from sin (bad acts), so that they will be invited into heaven when they die. Then you can explain the three aspects of Lent and introduce the idea of giving up something you love and giving to someone in need. If your child is interested in giving Lent a whirl, maybe brainstorm some ideas and embark on the experiment together.

You can find the lowdown on other religious holidays at Natural Wonderers’ Holiday Cheat Sheet for Nonreligious Parents.

Left: A priest from a Catholic church, Vicar Sandor Sebok, marks the forehead of a young boy at a church in the town of Fot, Hungary in February 2012, during Ash Wednesday celebrations. Photo by Attila Kisbenedek/AFP/Getty Images)