PARADISE, Calif. — A fast-moving wildfire that ravaged a Northern California town Thursday sent residents racing to escape on roads that turned into tunnels of fire as thick smoke darkened the daytime sky, wiping out what a Cal Fire official said was a couple of thousand structures.

“We were surrounded by fire, we were driving through fire on each side of the road,” said police officer Mark Bass, who lives in the hard-hit town of Paradise and works in neighboring Chico. He evacuated his family and then returned to the fire to help rescue several disabled residents, including a man trying to carry his bedridden wife to safety. “It was just a wall of fire on each side of us, and we could hardly see the road in front of us.”

Harrowing tales of escape and heroic rescues emerged from Paradise, where the entire community of 27,000 was ordered to evacuate. Witnesses reported seeing homes, supermarkets, businesses, restaurants, schools and a retirement home up in flames.

“Pretty much the community of Paradise is destroyed, it’s that kind of devastation,” said Cal Fire Capt. Scott McLean late Thursday. He estimated that a couple of thousand structures were destroyed in the town about 180 miles (290 kilometers) northeast of San Francisco. 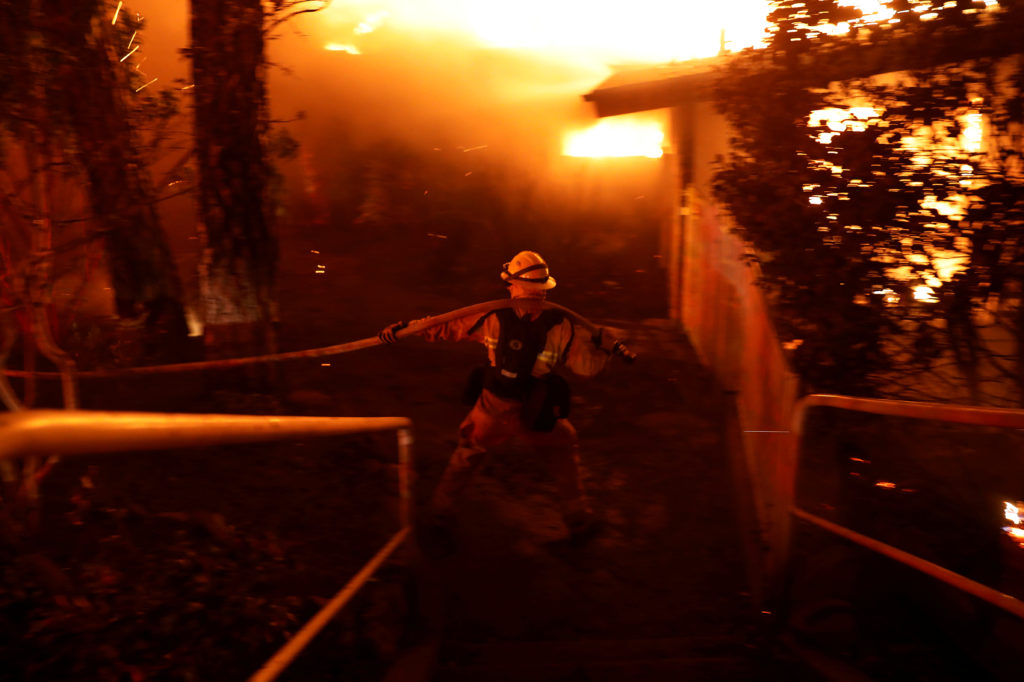 A firefighter drags a hose as he battles the Camp Fire in Paradise, California, U.S. November 8, 2018. Photo by REUTERS/Stephen Lam

The fire in Paradise was reported shortly after daybreak in a rural area. By nightfall, it had consumed more than 28 square miles (73 square kilometers) and firefighters had no containment on the blaze, McLean said.

In the midst of the chaos, officials said they could not provide figures on the number of wounded, but County Cal Fire Chief Darren Read said at a news conference that at least two firefighters and multiple residents were injured.

“It’s a very dangerous and very serious situation,” Butte County Sheriff Kory Honea said. “We’re working very hard to get people out. The message I want to get out is: If you can evacuate, you need to evacuate.” Several evacuation centers were set up in nearby towns.

Residents described fleeing their homes and then getting stuck on gridlocked roads as flames approached, sparking explosions and toppling utility poles.

“Things started exploding,” said resident Gina Oviedo. “People started getting out of their vehicles and running.”

Many abandoned their cars on the side of the road, fleeing on foot. Cars and trucks, some with trailers attached, were left on the roadside as evacuees ran for their lives, said Bass, the police officer. “They were abandoned because traffic was so bad, backed up for hours.” 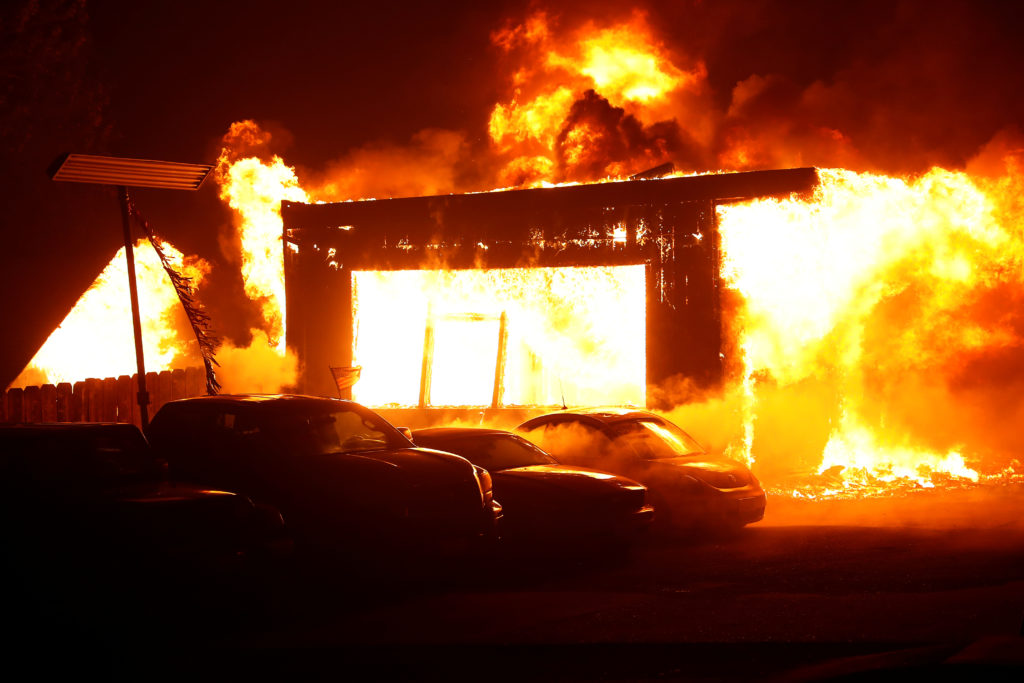 An used car dealership is seen engulfed in flames during the Camp Fire in Paradise, California, U.S. November 8, 2018. Photo by REUTERS/Stephen Lam

Thick gray smoke and ash filled the sky above Paradise and could be seen from miles away.

“It was absolutely dark,” said resident Mike Molloy, who said he made a split decision based on the wind to leave Thursday morning, packing only the minimum and joining a sea of other vehicles.

At the hospital in Paradise, more than 60 patients were evacuated to other facilities. Some buildings caught fire and were damaged but the main facility, Adventist Health Feather River Hospital, was not, spokeswoman Jill Kinney said.

Some of the patients were initially turned around during their evacuation because of gridlocked traffic and later airlifted to other hospitals, along with some staff, Kinney said.

Concerned friends and family posted frantic messages on Twitter and other sites saying they were looking for loved ones, particularly seniors who lived at retirement homes or alone. 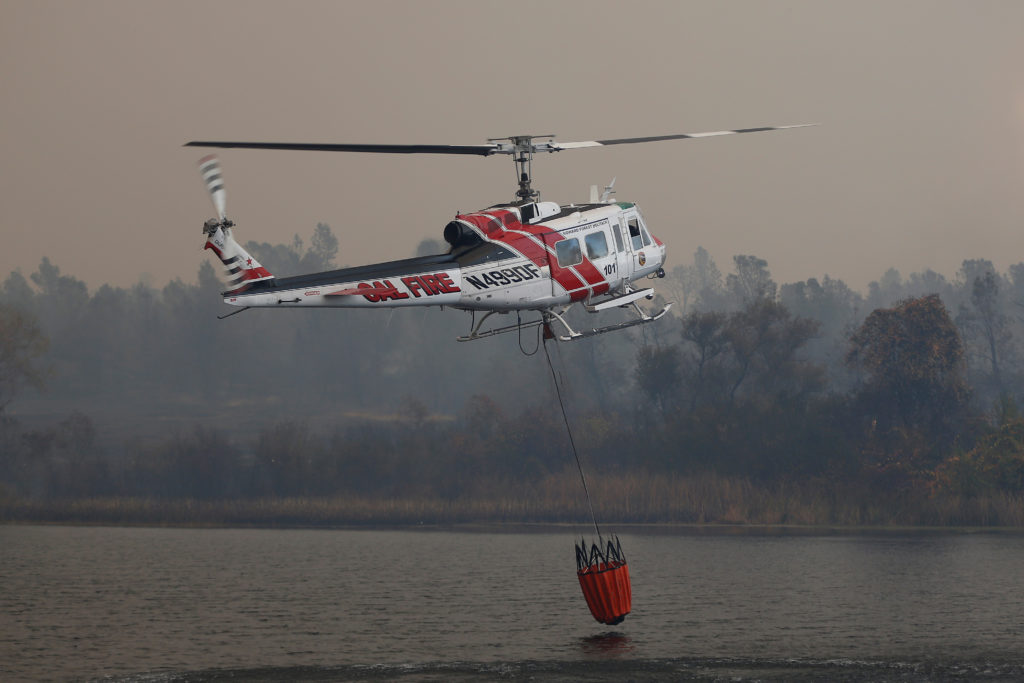 A Cal Fire helicopter picks up water from a reservoir while battling the Camp Fire in Paradise, California, U.S. November 8, 2018. Photo by REUTERS/Stephen Lam

“Most of them were immobile with walkers, or spouses that were bed-ridden, so we were trying to get additional units to come and try and help us, just taking as many as we could,” he said, describing the community as having “a lot of elderly, a lot of immobile people, some low-income with no vehicles.”

Kelly Lee called shelters looking for her husband’s 93-year-old grandmother, Dorothy Herrera, who was last heard from on Thursday morning. Herrera, who lives in Paradise with her 88-year-old husband Lou Herrera, left a frantic voicemail at around 9:30 a.m. saying they needed to get out.

“We never heard from them again,” Lee said. “We’re worried sick. … They do have a car, but they both are older and can be confused at times.”

The fire in Southern California was being whipped up Thursday evening by powerful winds that pushed it through canyons and to the edge of Camarillo Springs and Cal State Channel Islands, both of which were evacuated, The Los Angeles Times reported. The blaze broke out in the Hill Canyon area and in just 12 minutes jumped the 101 Freeway. By Thursday evening, it had scorched up to 7,000 acres and sent residents of more than 1,200 homes fleeing.

Fire officials said they expected it to burn all the way to the ocean. Television reports showed several homes on fire in the Oak Park community. Authorities shut down the 101 Freeway in both directions at Camarillo Springs Road.