ST. LOUIS – Storms in St. Louis this week dumped 25 percent of the city’s annual rainfall onto streets in the course of 12 hours, the most to hit the area in more than a century.

One person is dead and hundreds are displaced after the rain events this week. According to the National Weather Service, St. Louis saw a little more than 9 inches of rain Monday night into Tuesday, the highest 24 hour rainfall on record, beating the last record set in 1915 when remnants of the Galveston Hurricane brought down 7 inches.

In neighborhoods, residents reported destroyed cars and other property, harrowing boat rescues and other intense scenes. On Tuesday, the city’s fire department made 70 rescues in the city, St. Louis City Fire Chief Dennis Jenkerson said. Across the region, hundreds more were rescued. The fatality came after a person became stuck in a car submerged under water; the death is being investigated.

Mayor Tishaura Jones declared the city in a state of emergency Tuesday, which she said will help the city get the resources it needs to recover. She and a number of public safety leaders went out in St. Louis’ Ellendale neighborhood on Wednesday to assess the damage.

The number of injuries remained low, but the property damage across the area was significant, Jenkerson said.

“It’s just the amount of material things that these people have lost within their homes,” he added.

Flooding in the Midwest has gotten progressively worse in recent years due to climate change, said Michael Wysession, a professor of geophysics in the department of earth and planetary sciences at Washington University. It has forced cities to respond to more of these incidents and think about how to support infrastructure, historic neighborhoods and new growth accordingly.

“Change in temperature drives all the other systems, it drives ocean currents, it drives air jet stream patterns and it drives not only the amounts of rain and snow that fall but the patterns in how they fall,” he said.

“The average rainfall for July and August combined in St Louis is 7.5 inches of rain and we got that in six hours. That’s just going to happen much more frequently,” he told the NewsHour. 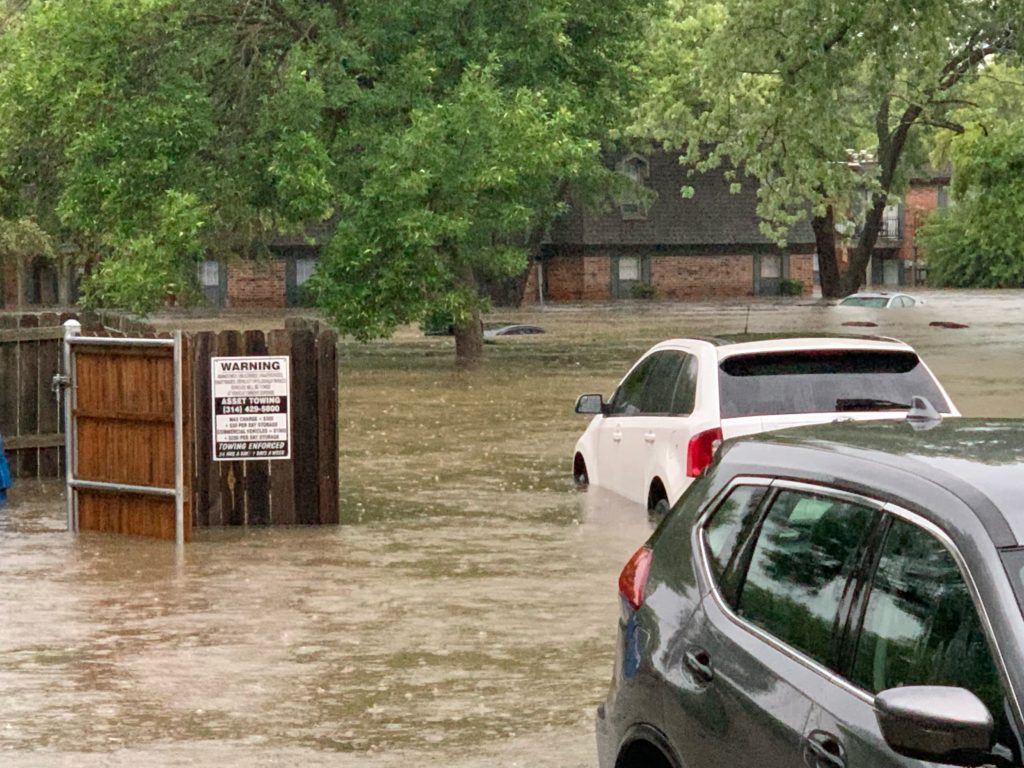 People in the St. Louis area woke up to their cars underwater after record breaking rain hit the region. Photo by Kyler Smith.

The St. Louis area has experienced major flooding in recent decades, notably the Great Flood of 1993, which according to the National Weather Service is considered “the most costly and devastating flood to ravage the U.S. in modern history.” At the time “the Mississippi River at St. Louis crested at 49.58 feet, the highest stage ever recorded.”

Sean Hadley, manager of public affairs for the Metropolitan St. Louis Sewer District, said while the St. Louis region does experience flooding given its proximity to the Mississippi River, Tuesday’s flash flood was different.

“What we’re seeing is not in one specific area, it’s actually all the way throughout the entire St. Louis region through St. Louis and St. Louis County,” he said.

Low water levels in the Mississippi River levels helped in some areas. However, flooding in Missouri’s River Des Peres, which feeds into the Mississippi, also ended up overflowing, which caused a lot of the issues in the area, Hadley added.

Jenkerson said in a Tuesday news conference that water was so high in some areas that people couldn’t see where the sewer opened up, causing them to get stuck. Emergency crews also had to maneuver carefully through water covering downed power lines.

Resident Kyler Smith said she would describe the flooding as a tragedy.

“People were not able to escape,” said Smith, who had to be rescued from her apartment with her 10-month-old and a 4-year-old children.

Smith noticed rainfall at 2 a.m. on Tuesday from her apartment in north St. Louis County. She started weighing her options: to wait out the rain or try to get out before the water got too high. Her apartment complex has flooded in the past, she says, but compared to previous years, Monday’s rain led to “a devastation.”

“I saw police officers and firefighters on top of cars trying to get little babies, taking babies from their parents and carrying bags and things,” she said. “That was really traumatic.”

When water started seeping into her apartment, Smith called for help. At about 9 a.m. she said officials with the Hazelwood Fire Department came to rescue her and her two children by boat.

“They said that they hadn’t seen anything like this in the 20 years that some of them have been there,” Smith said.

Though she and her children are now safe with a relative, their family car, an SUV, is “unrecoverable” after being submerged in water for several hours. As of now they have no idea if anything in their apartment is salvageable.

“I was not able to recover any of what was in my apartment other than like a duffel bag that I packed for me and my children. It includes some wipes, some Pampers and formula,” she said.

Hermitage Ave., a residential area in the Ellendale area of St. Louis, was also hit hard. At one point, almost every car on the street was nearly under water. After the water receded, each house had a watermark — a reminder of how high floods the water was hours earlier — and entire yards remained underwater. 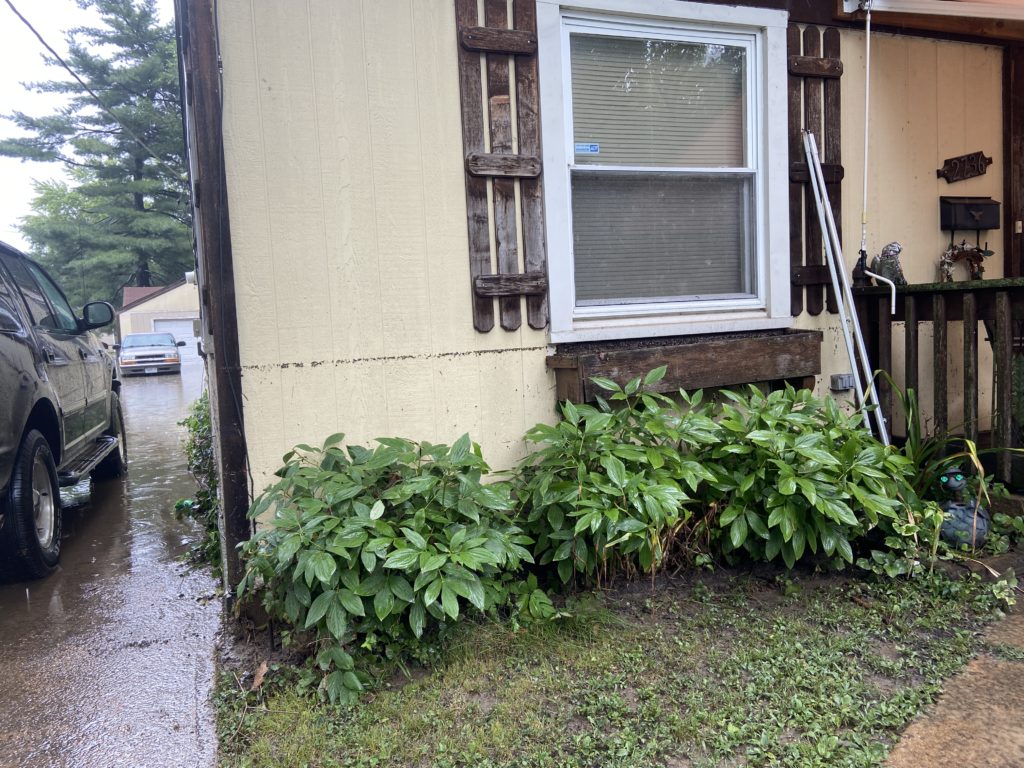 Hours after the water receded some homes had watermarks on the sides showing how high the water was able to go. Photo by Gabrielle Hays/PBS NewsHour

Hadley said the department had about 250 calls by noon Tuesday, but was running at capacity. He expects they will exceed 1,000 calls by the end of the week.

He said the department had to move its crews from the southern region of the city to north County, where Smith and her children were rescued.

“Our call center is inundated so we’re trying to move crews around to get to the hotspot areas,” Hadley said.

Wysession, who has been a professor for 31 years, said though many think of flooding as something that happens mostly in coastal areas, that is a misconception. Urban areas must also think about their infrastructure in relation to flooding and other water threats.

“We need to redesign our streets and parking lots and other paved areas, which in an urban area like St. Louis is quite substantial, in ways that capture that water and don’t lose it right away back to the ocean,” he said.

Part of that consideration, he said, has to include the communities often affected by these disastrous weather events.

“I think it’s really important for any sort of state or city municipality to look at this also as an issue of economic, racial and ethnic equity,” Wysession said.

In the short-term, people like Smith are left with uncertainties about what the future will bring.