Your holiday cheat sheet to Easter

I once read a story written by Jim Morrison, who teaches World Religion at a Minnesota high school and has a blog called Teach Not Preach. (Great title, right?) In the story, Morrison recalled that, nearly 20 years ago, a student of his — whose name he’ll never forget because it was Angel — approached him after class. She was a junior at the time and glanced around the room sheepishly as she said: “I have a question.”

“Is Jesus dead?” she asked.

Morrison answered the question with a straight face and played it off warmly, but, inside, he was dumbfounded. “How odd it was that a kid her age, living in Minnesota, would not know if Jesus was alive,” he wrote. Still, he was glad she asked.

“Obviously, we should not fault Angel for being ignorant,” Morrison wrote. “Her parents, friends and elementary school teachers taught her nothing about religion. The fault lies with the American educational system and its almost total reluctance to teach about religion.”

The moral of the story? Jesus is dead. He died 2,000 years ago. It’s why we have Easter. And if our kids don’t hear it from us, they might never hear it at all. So let’s do this thing, people!

Celebrates: The resurrection of Jesus

Date: The first Sunday after the full moon following the vernal equinox. In 2015, Easter falls on April 5.

Star of the Show: Jesus

Back Story: During his lifetime, Jesus of Nazareth never called himself the Messiah or Christ, at least not publicly. But by the time he and his disciples made their way to Jerusalem for Passover in the year 33 AD (or thereabouts), many people believed he was both. As legend has it: Jesus caused a ruckus at the temple in Jerusalem by overturning the tables of some dishonest merchants there — an event that likely raised the hackles of Roman leaders that may already have felt threatened by Jesus’ growing religious (and political?) popularity. After hosting his Last Supper (famously depicted by Leonardo da Vinci), Jesus was betrayed by one of his disciples, Judas, and condemned to die. He was crucified on a wooden cross (which is now the symbol of Christianity) beneath a crown of thorns. His famous last words: “My God, why have you forsaken me?” On the third day after his crucifixion, according to the Gospels, Jesus rose from the dead and ascended to heaven. Christians believe Jesus’ death brought forgiveness of sins and reconciliation between God and humanity.

Easter is a Week-Long Affair: The week preceding Easter is called Holy Week, which begins with Palm Sunday (marking the day Jesus arrived in Jerusalem). It also includes Maundy Thursday, which commemorates the Last Supper with Jesus’ disciples, Good Friday, honoring the decidedly not good day of Jesus’ crucifixion, and Holy Saturday, which focuses on the transition between the crucifixion and resurrection. Then there’s the happiest day of the year: Easter. In a sense, says my Catholic-raised friend, Tim, every Sunday of the year is meant to be a mini-celebration of Easter.

The Food: Some of what Christians eat on Easter harkens back to the Passover Seder: Hard-boiled eggs and lamb, among them. Ham is also an Easter staple, along with chocolate and sweets. 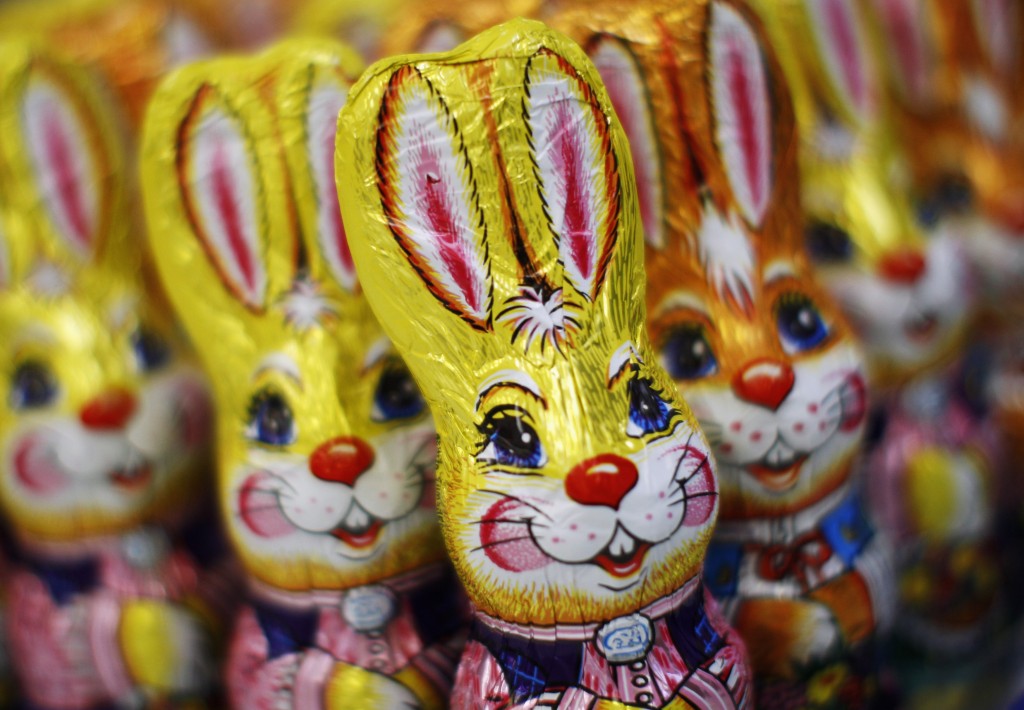 Although Easter is the most sacred of Christian holidays, there’s a whimsical side, too, celebrated with chocolate bunnies. Photo by Lisi Niesner/Reuters

The Fun: In addition to dressing in their “Sunday best” for Easter church services, Christians give to charity, share feasts with family and give Easter baskets full of chocolates, jelly beans and other goodies to children. Much like the Hindu celebration of Holi, Easter conveniently falls at the beginning of spring — so lots of the activities are symbolic of fertility and new life. Eggs, which also are said to represent the empty tomb of Jesus, are central to Easter, with celebrants hard-boiling them, painting them and hiding them. The Easter Bunny, although secular, also has become an Easter mainstay — the equivalent of Santa Claus to Christmas.

Conveying Meaning to Kids: Ironically, secular parents often have an easier time explaining Easter (without religion) than many Christian parents do (with it). The Passion is just such a darn mystery. Why did Jesus have to suffer? Why didn’t God intervene? How, exactly, did Jesus’ death bring about forgiveness of human sins? And if Jesus rose from the dead, why can’t we? Secular parents are lucky they don’t have to try to make sense of all this. Still, it’s important to let kids know this story is the single most important one in all of Christianity. If your kid knows this one, the rest is icing.

Editor’s note: Wendy Thomas Russell’s book, “Relax, It’s Just God: How and Why to Talk to Your Kids About Religion When You’re Not Religious,” came out this week.

Left: Members of the brotherhood of Santa Lucia participate in the Via Crucis which commemorates the crucifixion of Jesus Christ, as part of Holy Week celebrations in the town of Izalco, El Salvador. Christians celebrate Holy Week the week before Easter Sunday. Photo by Jose Cabezas/Reuters