Mary-Faith Cerasoli is an adjunct professor of Spanish and Italian. She has a master’s degree from Middlebury College. She’s also homeless.

The 53-year-old staged a one-woman protest Friday afternoon in front of the New York State Department of Education to bring attention to what she calls the “abusive job” of being an adjunct professor.

As the Making Sen$e series “Adjunctivitis” chronicled, adjuncts, who make up half of all college and university faculties, often drive hundreds of miles a week in between teaching gigs for an average pay of $2,000 to $3,000 per course. Medical insurance and benefits are luxuries unavailable to most of them.

That’s a problem for Cerasoli. She suffers from what she says is a life-threatening thyroid disease that has dug her financial hole ever deeper, adding unpaid medical bills to her student loans.

“The colleges are very disorganized and they are always demanding more,” Cerasoli told PBS NewsHour during her Friday demonstration. “I almost died last semester because I was working six days a week, and with all the traveling and putting out fires, I would forget to take my medication.”

Before taxes, her annual salary is $22,000, but because she teaches what’s considered a full course load, she’s been told she’s ineligible for public assistance. Since she can’t afford a place to live, she’s lived off the generosity of others, crashing in friends’ basements and driving an old Pontiac a car dealer gave her to commute to the Bronx and Manhattan campuses of Mercy and Nassau Community Colleges.

Cerasoli wasn’t always an adjunct. She taught Advanced Placement language courses in New York City high schools for 10 years. But when a student accidentally hit her in the eye in the shuffle of a chaotic classroom, causing a detached retina, her eye doctor told her to find a different career. That was 2006. Before starting as an adjunct in 2010, she bounced on and off unemployment, sold Acuras for a car dealer and jewelry on Madison Avenue. “Teachers,” she said chuckling, “are great sellers because we know how to talk.”

How does she feel about her work? “Adjuncting is the bridge to nowhere,” she said. “I would never recommend becoming a professor to my students.”

The New York State Department of Education wasn’t aware on Friday afternoon that Cerasoli was protesting outside their headquarters. Spokesman Dennis Tompkins said the guards typically alert him if anyone is protesting and he hadn’t seen Cerasoli on his trips in-and-out of the building.

The driving rain forced Cerasoli off the steps several times, but she says no one from the Department of Education approached her. She chose their headquarters, which also house the state’s office of higher education, as the backdrop for her protest because, she said, “it’s just so colossal… It represents a large, stark institution.”

Beyond the building’s looming columns and Albany’s Friday drizzle, Cerasoli’s protest sparked a weekend Twitter movement among adjuncts around the country, with many more emailing photos of themselves to adjunct union organizers. Some of their photos are below.

For more from Arik Greenberg, read the testimonial he wrote for Making Sen$e about being an adjunct: “How One Professor’s American Dream Turned Into the American Nightmare.” 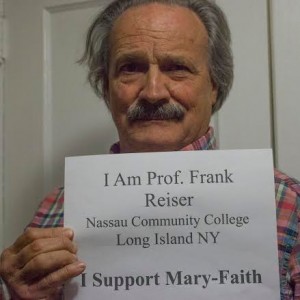 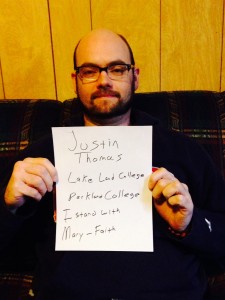 @DrArik @MMstrikesback Mary Faith is an adjunct who has been denied medicaid, and a livable wage. Stand with her. pic.twitter.com/ioNtTsZhms 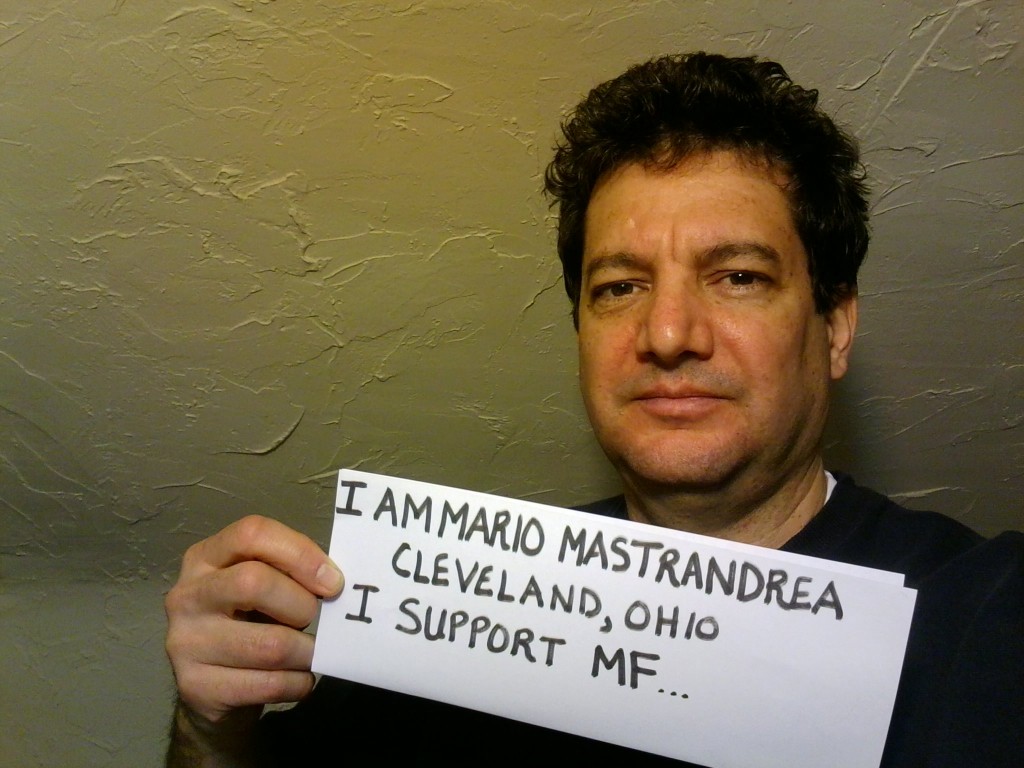 Watch Paul Solman’s story about the plight of underpaid adjuncts below:

Lee Koromvokis contributed to this report.

Left: Mary-Faith Cerasoli protests the conditions of adjunct professors outside the New York State Department of Education in Albany on Friday, March 28. Photo by Lee Koromvokis.