PORTLAND, Ore. — Top leaders in the U.S. House said Sunday they were “alarmed” by the Trump administration’s tactics against protesters in Portland, Oregon, and other cities, including Washington, D.C., and called on federal inspectors general investigate.

The Democratic lawmakers are seeking an investigation “into the use of federal law enforcement agencies by the Attorney General and the Acting Secretary of Homeland Security to suppress First Amendment-protected activities in Washington, D.C., Portland, and other communities across the United States.”

The mayor of Oregon’s largest city said Sunday the presence of federal agents is exacerbating tensions in Portland, which has seen nearly two months of nightly protests since the killing of George Floyd in Minneapolis.

Speaking on CNN’s ‘State of the Union,’ Democratic Mayor Ted Wheeler said federal officers “are not wanted here. We haven’t asked them here. In fact, we want them to leave.”

President Donald Trump has decried the demonstrations, and Homeland Security Secretary Chad Wolf blasted the protesters as “lawless anarchists” in a visit to the city on Thursday.

“We are trying to help Portland, not hurt it,” Trump tweeted Sunday. “Their leadership has, for months, lost control of the anarchists and agitators. They are missing in action. We must protect Federal property, AND OUR PEOPLE. These were not merely protesters, these are the real deal!”

The fire at the Portland Police Association building was put out a short time later, Portland police said on Twitter. The department declared the gathering a riot, and began working to clear the downtown area.

“As the crowd was dispersed, several people in the crowd were arrested and officers were able to extinguish the fire. Portland Police did not use any CS gas,” the bureau said in a statement early Sunday. 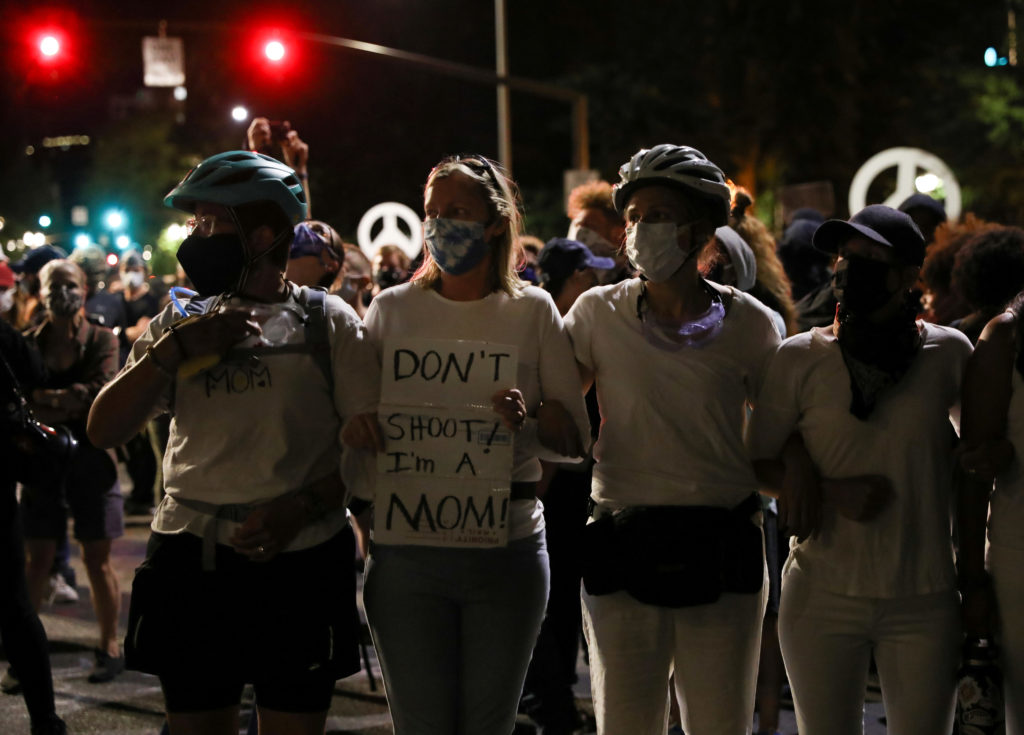 Mothers stand in front of protesters and participate in a demonstration outside the Justice Center during a protest against racial inequality in Portland, Oregon, U.S., July 18, 2020. Picture taken July 18, 2020. Photo by Caitlin Ochs/Reuters.

Tear gas was deployed, according to pictures and video from the scene, but it was not necessarily CS gas. Fencing that had been placed around the federal courthouse had also been removed by protesters and made into barricades, police tweeted.

Police said protesters had gathered Saturday evening at the Portland Police Bureau’s North Precinct, vandalizing patrol vehicles and taunting officers as they reported for work. Later, as police dispersed a group that had gathered near North Interstate Avenue, people threw rocks and paint-filled balloons at officers. Some were injured, the statement said.

Before the aggressive language and action from federal officials, the unrest had frustrated Wheeler and other local authorities, who had said a small cadre of violent activists were drowning out the message of peaceful protesters in the city. But Wheeler said the federal presence in the city is now exacerbating a tense situation.

“What we’re seeing is a blatant abuse of police tactics by the federal government, Wheeler said Sunday.

Oregon Attorney General Ellen Rosenblum sued Homeland Security and the Marshals Service in federal court late Friday. The complaint said unidentified federal agents have grabbed people off Portland’s streets “without warning or explanation, without a warrant, and without providing any way to determine who is directing this action.”

The action by Portland’s police was condemned by Jo Ann Hardesty, a prominent member of the City Council. Hardesty said Saturday that local police “joined in the aggressive clampdown of peaceful protest.”

Hardesty also slammed Wheeler, telling the mayor he needed to better control local law enforcement. Hardesty, who oversees the city’s fire department and other first-responder agencies, said in an open letter to Wheeler if “you can’t control the police, give me the Portland Police Bureau.”