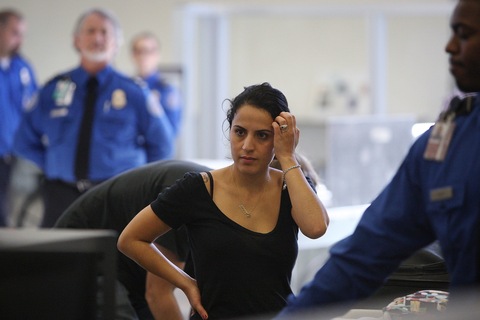 When Denver International Airport opened in 1995, the city was particularly proud of the main terminal building. They spent a lot of money to make it unique. There’s a soaring fiberglass fabric roof that looks a little like a circus big top. The airport authority prefers to say it resembles the peaks of the Rocky Mountains that provide a background if you look at the structure from the east. That tent covers a vast, open space and allows natural light to illuminate the wide-open spaces below.

At least it used to be wide-open.

Two security checkpoints for passengers have always been located in the terminal. But since the 9/11 attacks, the checkpoints have gradually expanded to take up more two-thirds of the floor space on Level 5. It’s a graphic reminder of how much aviation security has changed since terrorists hijacked four aircraft that day. At least DIA (DEN in aviation shorthand) had room for the X-ray machines, metal detectors, explosive detectors and now the new millimeter-wave body scanners. Lots of other airports have had to shoehorn that equipment into ticket counter areas or jam it into corridors.

I’m old enough to remember when boarding an airplane was simple: One walked through an exterior door and took a short hike across the ramp before clambering up a mobile stairway. The first security screening stations went up in in response to aircraft being hijacked to Cuba in the late 1960s. In the early 1970s, airlines were given the task of providing security, and they elected to pay private security companies to run the checkpoints. The overall system was supervised by the Federal Aviation Administration.

After 9/11, Washington federalized airport security by creating the Transportation Security Administration. It was the largest federal startup since World War II. The agency quickly hired more than 60,000 people to screen passengers and their baggage at 450 U.S. airports. At first, TSA checkpoints looked a lot like their private predecessors. But that started to change in 2001. Passengers were required to remove their shoes for X-ray scanning after Richard Reid tried to detonate explosives hidden in his shoes.

In 2006, a foiled plot to smuggle liquid explosives onto 10 aircraft bound for North America from the United Kingdom led to a requirement for passengers to limit the amount of liquids they could bring aboard in carry-on bags. In the latest would-be incident in 2009, the so-called “Underwear Bomber” tried to detonate explosives hidden in his underwear, prompting the TSA to speed up deployment of body-scanning machines that are supposed to detect things hidden beneath clothing.

For many travelers today, just getting to the plane can be a major hassle. For some, it has been a nightmare. A Marine Corps veteran tried to board a plane at Midway airport in Chicago last year, only to find that he was on the FBI no-fly list. A Colorado woman was arrested and held in jail overnight because she says she has an uncontrollable aversion to being touched by strangers. A college student from Philadelphia was handcuffed and detained for more than four hours because he was studying Arabic and was carrying homemade flash cards.

You can meet these individuals, and hear what the TSA had to say about aviation security, in the NewsHour story that producer Carol McKinley, photographer Brian Gill and I have prepared for the 10th anniversary of the 9/11 attacks.