How Americans are stepping up during the shutdown

People across the country have stepped up to help as the partial government shutdown approaches the one-month mark.

And help is needed. Many of the 800,000 furloughed employees are struggling to pay mortgages, access medical and child care, and put food on the table as their savings dwindle.

Within weeks of the shutdown, the number of furloughed federal workers seeking unemployment benefits doubled. And although President Donald Trump signed legislation to provide back pay to workers after the shutdown ends, the financial and emotional tolls on workers could linger.

While they may not completely relieve the burdens and stresses put upon workers during the current political standoff, here are four ways volunteers have offered assistance.

In early January, a group of administrators from American University’s School of Public Affairs saw an opportunity to help furloughed employees gain professional enrichment while their normal jobs lay idle. The administrators organized “Classes Without Quizzes,” a free, day-long workshop that provided skills and management training for government workers.

University faculty and staff designed the mini courses, which covered skills like making a podcast and understanding emotional intelligence in the workplace, to be applicable for any job at any level.

Vicky Wilkins, dean of American University’s public affairs school and one of the event’s organizers, initially prepared for a day full of anxious furloughed workers, but found that the 450 participants were able to commiserate and network with other government employees.

Paul Bamonte, a branch chief in the Department of Homeland Security, and an alumnus of the university, said he’s been networking daily with other attendees he would have otherwise never met. He found that he shares similar problems with employees from different agencies, and they discuss solutions over coffee.

This type of morale boost was especially important to Wilkins, who worries that the lengthy shutdown and subsequent insecurity over federal jobs will turn people away from working in the public sector.

Wilkins said the school hopes to extend these development programs for government workers to three times per year, and she hopes that the idea will spread to other universities around the country. Similarly, Fairfax County public schools in Virginia recently held a job fair for furloughed workers looking to find positions as substitute teachers.

Charities are reaching out to workers in need

As workers dig deeper into savings to pay for bills and basic necessities, charities have started to offer supplementary outreach programs. Food bank Bread for the City, which normally caters to low-income residents in D.C., has extended its services to meet the needs of furloughed employees across the District, Virginia and Maryland.

Starting this week, Bread for the City provides furloughed employees with five days’ worth of food once a month. The organization normally serves about 310 people per day, but within the first two days of extending service to furloughed workers, the number spiked to 530. Bread for the City has doubled its food orders to match demand.

“This is the first time in history that [the shutdown’s] been this long,” said food, clothing and facilities director Melissa Frazier, who also worked at Bread for the City during the government shutdown in 2013. “We’re coming together and trying to build our community for everyone that’s involved.” 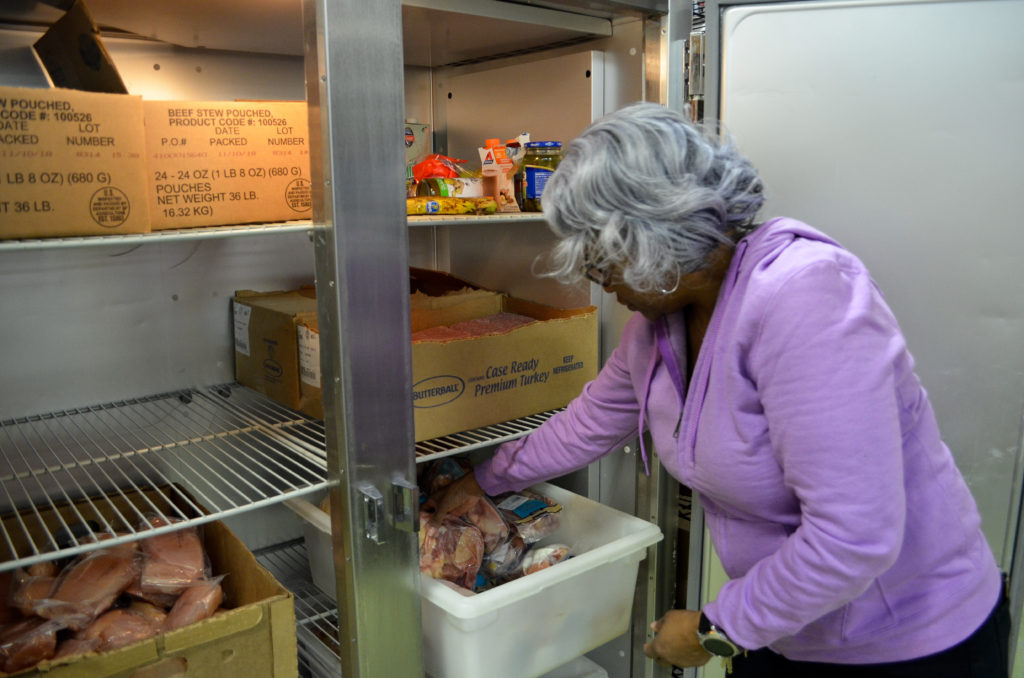 Frazier opens one of the food bank’s refrigerators to retrieve packages of chicken and turkey. Recipients can choose between a variety of different cuts of poultry for their monthly food bag. Photo by Jamie Leventhal

One federal employee in line at the food bank — Tyisha Owens — said it’s been difficult to pay for basic needs, like child care for her two children. Owens, a supervisor at the Department of Homeland Security, has been trying to make ends meet after being denied unemployment benefits. She’s been picking up part-time jobs, working as a food delivery driver, student teacher and transcriber. Owen has been seeking donation programs for furloughed workers, but she said just accessing these resources takes a toll on her already tight budget.

“Yes, there are resources available, but on my commute I have to get gas,” Owens said. “Paying for gas is a primary need now, so I can find a resource I don’t have to pay for, like food.”

After volunteers verified her federal ID, Owens received an oversized grocery bag filled with canned string beans, peanut butter, tomato sauce, and a whole chicken. As she left the food bank, Owens passed by a queue of fellow federal workers that wrapped down the hallway.

Organizers said the food bank will continue to provide for both furloughed federal workers as long as needed.

National Parks are staying open — with some special help

The ripple effects of the partial government shutdown have reached far beyond the nation’s capital to America’s national parks and monuments — from the swamps of Florida’s Everglades to the Pacific waters of Hawaii’s World War II memorials. The gates may be open at these parks, but their functioning is reliant on donations of time and money from individuals and collaborations between nonprofits, state governments and private industry.

Peter Campbell, a retired school principal from Maine, normally leads Everglades visitors on moonlit tours of the park. Now he’s instead scrubbing the bathrooms of the visitor center and taking out the trash. He’s being paid a nominal amount by the nonprofit Florida National Parks Association, which is also footing the bill in Everglades National Park for an array of items the parks can’t pay for during the shutdown. That includes electricity in its visitor centers, to soap and toilet paper. Jim Sutton, the executive director of the nonprofit, said the association is spending $100 a day on toilet paper alone. Sutton says finding volunteers hasn’t been hard. “I actually have three people answering emails” from potential volunteers, Sutton said, “and we’re trying to tell everybody ‘yes’.” 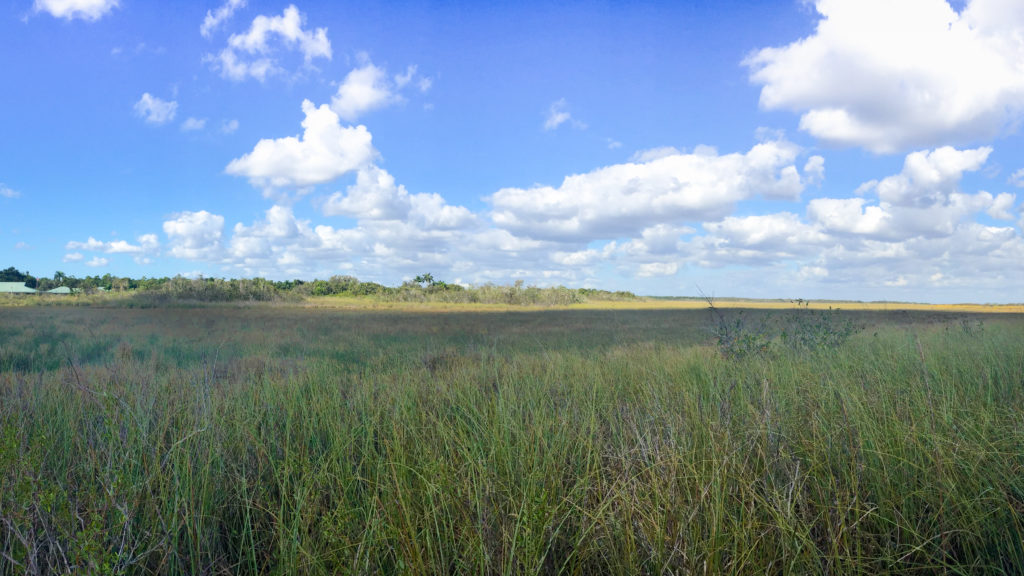 “About a million people visit Everglades National Park in a normal year. Revenue estimates from bookstores inside the park indicate that since the shutdown began, visitor numbers are down 7 percent.” Photo by Lorna Baldwin

In Hawaii, the USS Arizona Memorial is one of the state’s biggest tourist attractions, with 1.8 million visitors a year. The only reason it’s been able to stay open so far is because of the work of nonprofit associations like the Pacific Historic Parks. At the beginning of the shutdown in December, it partnered with three other nonprofits and the state of Hawaii to keep the World War II Valor in the Pacific National Monument open to the visiting public. “On the USS Arizona there are bodies, there are soldiers who have died,” said Aileen Utterdyke, the president and CEO of the organization. “It needs to stay open for veterans, for the soldiers who died out there. It’s like closing the gates on Arlington. You can’t do that.”

The cost isn’t inconsequential. On the high end, Utterdyke says her organization is spending $18,000 a day and at the lower end, $7,000 a day. Under normal circumstances, those funds would be used for outreach and education efforts, not cleaning supplies and trash pickup. Utterdyke said it “takes continuous pounding the pavement, continually asking for support and donations.” Efforts have paid off. Hawaii Tourism, a contingent of airlines, hotels and tour companies, has pledged donations totalling $200,000 to keep the site open through the end of January.

Federal employees are keeping busy by helping others

A few federal workers in North Carolina — eager to get back to work — started organizing daily volunteer events for their similarly restless companions. Every day, a group of volunteers chips in at a different charity organization in the Research Triangle Park area.

“It’s frustrating not to be able to work, but we are all trying to stay as positive as we can, and the volunteering helps us do that,” said Alison Davis, furloughed employee with the Environmental Protection Agency who’s helping to organize volunteers.

Workers have channeled their energies into volunteering at different tasks, like folding baby wipes at the Diaper Bank of North Carolina and cleaning playrooms in the local Ronald McDonald House. During the events, furloughed employees can meet up with co-workers, make new contacts and share money-saving tips.

Davis said one volunteer branched off and gathered another group to return to a food bank they had worked at the week before. One volunteer was trained at a nursing home so she could return. Davis said she and her group of volunteers bagged potatoes for two hours, or enough to provide for more than 8,000 meals. She lives 10 minutes away from the local food bank in Raleigh, North Carolina, and now plans to continue volunteering after the shutdown ends.

Left: Olivia Anderson of Arlington, Virginia, joins volunteers, many of whom are furloughed workers, to clean up trash on the National Mall in response to the partial government shutdown in Washington on Jan. 4, 2019. Photo by REUTERS/Kevin Lamarque