When President Bill Clinton signed the 1993 bill that became known as “Don’t Ask, Don’t Tell,” rehashing the military’s World War II-era ban on gay and lesbian service members, it was still abstract for Bridget Altenburg, who was then in her junior year at West Point. She was not yet serving in the military, nor had she come out as gay.

But once she did, at age 24 while stationed in Germany, the law had real-life implications. Feeling the relief of self-acceptance, Altenburg came out to some supportive friends in her unit. But then someone reacted negatively.

“I immediately thought, ‘Oh, my God, what if she turns me in and that’s the end of my career?” she said.

“The burden of ‘Don’t Ask, ‘Don’t Tell’ was much more dramatic than the burden of being gay.”

Clinton had made a campaign pledge to lift the ban, but once in office faced opposition from senior military and congressional leaders, including Georgia Sen. Sam Nunn, the Democratic chair of the Senate Armed Services Committee at the time (he later changed his view).

The compromise was the Don’t Ask, Don’t Tell (DADT) policy, which said gay service members were not required to disclose their sexual orientation, but could still be discharged if they were discovered to be gay. For the next 17 years, many gay and lesbian service members described living and serving in limbo, knowing there was no longer a ban on them per se, but that their careers would still be at risk if they were found out. That began to change on Dec. 22, 2010 — 10 years ago today — when President Barack Obama signed into law the repeal of DADT.

But long before that, the law meant that Altenburg could not fully be herself, even as everyone seemed to know – and be fine with – her truth. She had a girlfriend, whose name was on care packages filled with candy, which Altenburg would share with her fellow troops. Years later, one of the sergeants acknowledged that they assumed the two were a couple.

“She was like, ‘Yeah, we knew. We didn’t care. We just liked the care packages!’” Altenburg said.

Despite those assumptions, Altenburg couldn’t fully be herself. She didn’t come out to soldiers who were under her command because she didn’t want them to feel conflicted about reporting her. “The burden of ‘Don’t Ask, Don’t Tell’ was much more dramatic than the burden of being gay,” Altenburg said. She declined to extend her military service past her first five-year commitment.

“A lot of the reason that I got out was looking down the road and seeing that I was always going to have to hide this part of myself,” she said.

Investigated for being oneself

Sixteen years later, Jennifer Dane knew that she was going to have to hide a part of herself. When she joined the Air Force in 2009 she signed a waiver that said she would be discharged for “engaging or attempting to engage in a homosexual act,” “stating that he or she is a homosexual or bisexual,” or “marrying to attempting to marry an individual of the same sex.”

Serving in the Air Force was her dream, and she was preparing to stay closeted in order to live it. “I knew that I had a bigger calling,” she said.

But a year later, she was sexually assaulted — an incident that led her to fear that she would be outed. 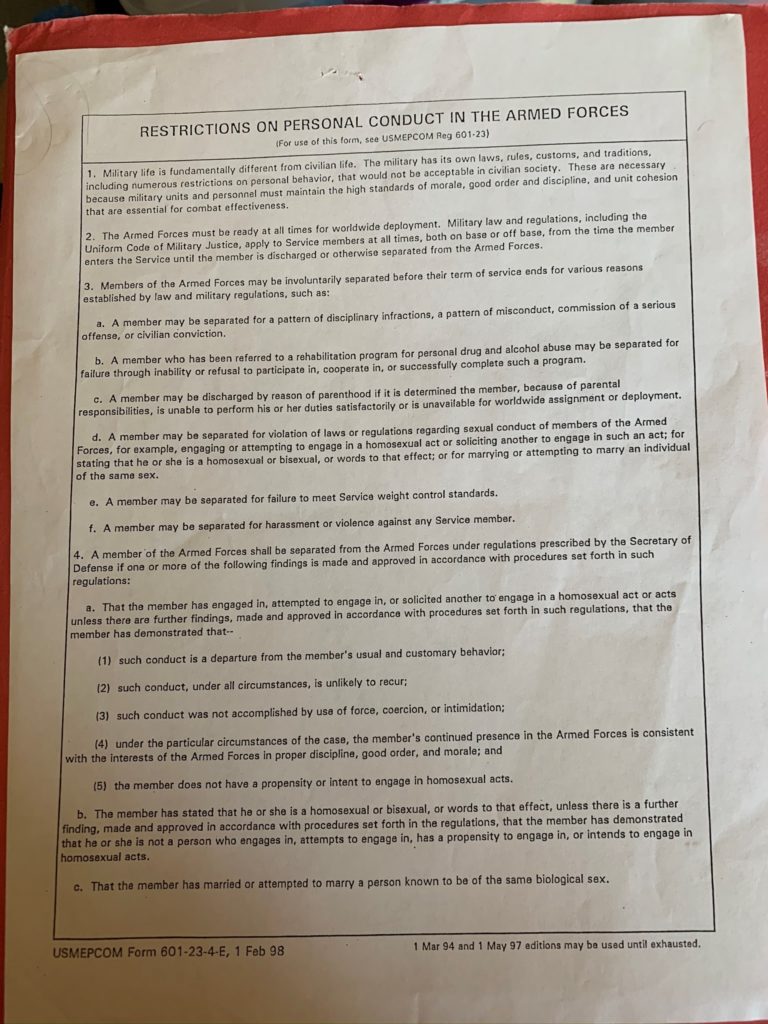 In the investigation and trial that followed the assault, Dane said lawyers for the Air Force, who were mounting a defense of the alleged assailant, asked her during a pre-trial meeting if she was gay. They were trying, Dane said she learned, to prove that Dane had a girlfriend, in order to argue that she had alleged the encounter was an assault to avoid getting caught cheating.

During the meeting, Dane said she told the defense lawyers she couldn’t share that information because of DADT, and would have to retain her own counsel to ensure she wouldn’t be incriminated.

When the trial began in November 2010, Dane believed she would be asked under oath if she were gay.

“The more traumatic incident [than the assault] was actually being investigated for simply being myself,” she said.

For Dane, the threat of unwillingly outing herself, which would lead to her dismissal, was too close a call. The case against her assailant was dismissed that month, and she did not have to testify.

Just a month later, Obama signed the policy’s repeal. It took effect in September 2011, which was when Dane came out.

“After that, my experience for the most part was positive,” she said, noting that others may have had a more negative experience than her.

She served another five years, and then became an advocate for LGBTQ+ service members, and is now the interim director of the Modern Military Association of America, a nonprofit organization. Among its priorities: repealing the Trump administration’s reinstatement of the ban on transgender service members and helping service members upgrade their discharge papers if they cite “homosexual conduct” as a reason for departure.

According to the American Psychoanalytic Association, an estimated 100,000 service members were discharged with statuses of “other than honorable,” “dishonorable” or “general” before DADT, which limited their access to benefits, health care and burial rights in a VA cemetery. Following DADT, service members who left because they were gay were discharged honorably, but with a description reading, “Homosexual Conduct,” “Homosexual Act” or “Homosexual Marriage.”

“Our goal is to restore dignity, to honor those folks that were discriminated against,” Dane said.

‘More important than your reelection’

When he served in the Army, former Pennsylvania Rep. Patrick Murphy saw the subtle, agonizing ways his gay peers had to hide parts of themselves. They’d shy away from questions like what they were doing that weekend, or whether they were dating anyone.

“When you ask them to lie about who they are, it goes against the very core of their personal integrity. And it’s not what our military is about,” Murphy said.

When Murphy became the first Iraq veteran elected to Congress in 2007, he made the repeal of DADT a personal mission, taking over a repeal bill when its primary co-sponsor left Capitol Hill. Murphy lobbied his colleagues personally, shaping his argument to match the person’s priorities. He said he got the vote of one holdout senior Democrat on the House Financial Services Committee by waiting until he saw the lawmaker sitting with former Rep. Barney Frank, D-Mass., the committee’s powerful chairman who was also openly gay. 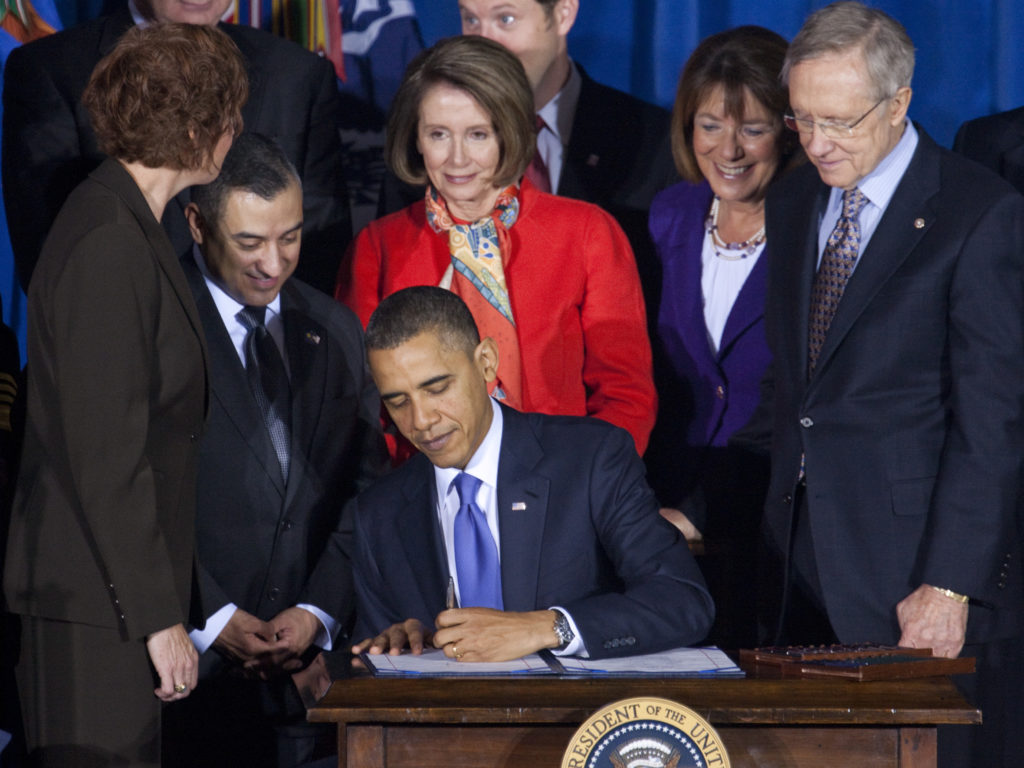 “I sat next to [the congressman] and talked to him one-on-one and made it a little uncomfortable about why he should do it,” Murphy said.

In May 2010, the House of Representatives passed the repeal bill, 229 to 186, with 220 Democrats and nine Republicans in favor, and 160 Republicans and 26 Democrats opposed. The Senate passed the bill on Dec. 18.

Murphy, who later went on to serve as secretary of the Army under Obama, said he received death threats for his work on the DADT repeal. He also lost his reelection bid in Pennsylvania’s historically Republican 8th district that year, a month before the bill became law. But he says any political hits he took because of the DADT repeal were worth it.

“Judgment Day is more important than your reelection,” he said.

Retired Army Col. Mike Jason remembered the first time he witnessed DADT in action. In the mid-90s, he was preparing to work with one of his favorite mechanics, but learned the man had left because he came out to his first sergeant, saying he couldn’t lead a double life anymore.
Jason said he thought, “‘Well, this is ridiculous. The guy’s an amazing soldier. Why do we care?’ And I realized I was part of the institution that had allowed that to happen.”

Years later, Jason was commanding a combat arms unit at Fort Stewart, Georgia, when he received the orders to implement the DADT repeal. He was told to meet with soldiers in small groups, with the chaplain present. In those meetings, Jason’s message was clear– he wanted everyone to be regarded for their “professional integrity” and not to be discriminated against based on who they love.

He noted that the military is a conservative institution and that it’s easy to become so steeped in it that you can tune out an ever-changing world. But that doesn’t mean senior military leaders don’t want to embrace reform. Jason urges patience if their attempts seem slow or clumsy.

“They don’t have the way of talking about it or growing in the way they express themselves,” he said. “They want to be allies. But we can often turn allies off because we’re impatient with their use of language.”

Building on the legacy

For Lt. Col. Bree Fram, an active duty astronautical engineer in the Air Force who is trans, the repeal of DADT paved the way for future reform, even as it focused on lesbian, gay and bisexual service members.

“A lot of people thought [the DADT repeal] covered trans folks. So we were almost forgotten by a lot of people because they were celebrating,” Fram said.

In June 2016, the Department of Defense announced it was lifting the ban on transgender troops serving openly. Fram came out to her colleagues the day the policy was announced. It allowed her to be honest about a part of her life which, besides her wife and children, she had concealed from almost everyone, save a few people. 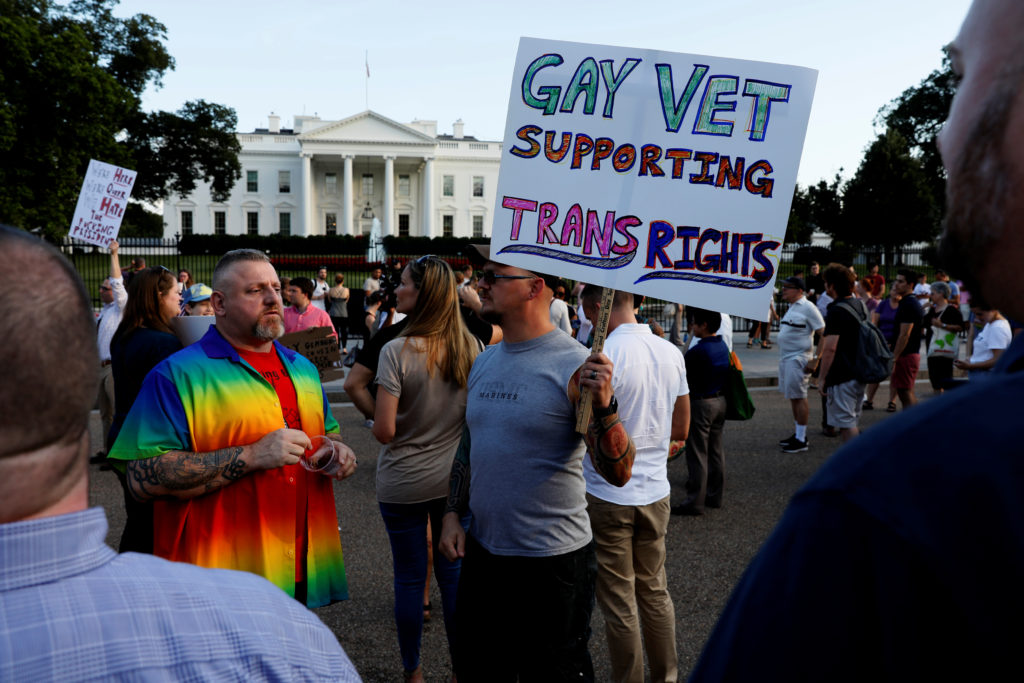 Demonstrators gather to protest President Donald Trump’s announcement that he plans to reinstate a ban on transgender individuals from serving in any capacity in the U.S. military, at the White House in July 2017. Photo by REUTERS/Jonathan Ernst

But beyond the mental burden it lifted, it allowed her to focus on the very thing the military trained her to do — her work.

“When you have to dedicate that mental energy to protecting yourself and protecting your identity, that’s energy that instead could be used to accomplish the mission to get your job done,” said Fram, who is now also vice president and communications director at SPART*A, an organization that supports transgender service members.

A few years later, after the DOD had phased in new policies to address its trans service members, Trump announced, via tweet, that he was reinstating the ban.

In addition to throwing the entire military community into confusion over whether he could really undo the policy via tweet, it was demoralizing to the trans service members who had so recently been allowed to emerge from the shadows. But in some ways it also mobilized the community, Fram said.

“The best thing for them to do was to lace up their boots, get to work and get the job done to prove again and again that they belong,” she said. “In a strange way, I actually look back at it and say the president did us a favor by shining a spotlight on our service.”

Fram is looking forward to President-elect Joe Biden reversing the Trump trans ban via executive order on day one of his administration. But she said that is only where the work resumes. She said SPART*A has spent the last four years collecting the testimony of its 1,100 members to help inform DOD policy going forward.

But more permanently, Fram said, the trans military ban must be legislated out of existence, to ensure it can’t again be undone by executive fiat.

“We do believe that in a few more years, the thought of turning back the clock again would be so difficult as to make it nearly unthinkable,” she said.